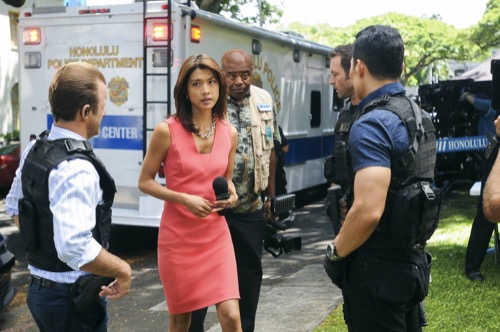 Tonight on CBS Hawaii Five-0 air with an all-new Friday, October 20, 2016, episode and we have your Hawaii Five-0 recap below.  On tonight’s Hawaii Five-0 Kono (Grace Park) and Adam (Ian Anthony Dale) are reunited when he is released from prison.

Did you watch last episode of Hawaii Five-0 where Five-0 had too find McGarrett and Alicia when they were kidnapped by the serial killer they had been hunting? If you missed it we have a full and detailed Hawaii Five-0 recap, right here.

On tonight’s Hawaii Five-0 season 7 episode 5, “When a cache of guns is stolen from a gun range, Five-0 discovers the culprit is intent on making a dramatic and potentially deadly statement on gun violence. Also, Kono and Adam are finally reunited when he is released from prison.”

Adam came home on tonight’s episode of “Hawaii Five-0” and no one could be happier about that than Kono. Kono had basically had to put their marriage on hold until Adam got out and so she was just glad to finally have back. However, she did at least share him.

Kono had apparently planned their welcome back for Adam with all of their friends and she had also read messages from the people that couldn’t be there, but what Kono hadn’t planned on was being called into work. So it had been fortunate that her team members had told her that they could handle the case by themselves while she got to relax for the day with her newly returned husband.

But it turns out that the guys had kind of needed on this latest case because it hadn’t been as easy as they thought it would be. The guys, you see, had heard that someone outfitted a truck as a battering ram and that the vehicle had driven right into a gun shop.

Only that vehicle had then driven back out onto the street. So the guys as well as HPD had thought that their culprit was still in the vehicle and all they had to do was reason with yet McGarrett hadn’t the patience for that and he had instead thrown a grenade into the vehicle as a way to hasten up the process. And, well, his plan didn’t necessarily work for one simple reason.

There hadn’t been anyone in that vehicle. Someone had wanted the police to believe they were still in the vehicle when in actuality they had used a trap door on the bottom to sneak out into the tunnels underground and those tunnels carried the culprit right into the gun shop’s secret gun vault.

Which was in fact unusual. Yet, the owner did confess to what had been in that vault and he apparently harbored mostly illegal and some would say military grade weapons. So thankful the owner had given Five-0 a catalogue of his weapons and the unit helpful Norm had told them who would watch if someone was trying to sell a large cache like the one that was stolen.

One of the people that Norm had warned them about had been Matty McConnell. Matty was some gun nut who liked to advertise everything he did on social media. So it wasn’t that long before Matty began posting about his new toy and that’s if a M134 Minigun could even be called a toy.

Though when Five-0 showed up at Matty’s door, they had found the music blaring and had followed the noise until they found Matty’s lifeless body. Unfortunately, the same person that had stolen the gun and had sold it to Matty had then it used on Matty. And Matty’s killer also had the nerve to post a final message claiming to be Matty yet tried to tell people about anti-gun advocacy.

Yet, that final message helped Five-0. McGarrett had known that someone had wanted to turn Matty’s death into a message and so he knew that they weren’t looking a gun nut, but instead someone who feels like guns had ruined their life.

So Five-0 then reached out to bereavement groups in the area and they had been warned about one man that had suddenly stopped coming to group. His name was Marvin and Marvin had left a goodbye note at his apartment as if he knew that someone was bound to find that letter. And so that note had been the only warning that Five-0 had and sadly it hadn’t been enough.

Marvin had eventually take a whole room of hostages down at the courtroom and the only ones he wanted to talk to was the media. So McGarrett and the other finally called Kono and Kono was used as part of their ruse.

Kono and Lou pretended to be a news crew that was covering the story at the courtroom and in exchange for them getting inside McGarrett had asked that Marvin release two hostages. But while the first part of their plan worked, there was a bit of drawback with allowing Lou and Kono inside. Especially when one of the judges had a license to carry and had tried to make himself the hero.

As the story goes, the judge tried to take his shot and had only given Marvin a slight wound while getting a more serious injury from Marvin’s return fire. So both Kono and Lou had tried to help the judge though all that truly did was blow their cover because Marvin had realized that they were cops the second they revealed that they knew about treating the judge’s wounds.

However, McGarrett was going to store into the courtroom and rescue his people by any means neceassy if Danny hadn’t told him to back down. Danny had apparently found out that Marvin’s real name was Kyle Kane and that Kyle’s son Shawn had been a mass murderer. And so Danny thought he could reach Kyle by talking about that.

Danny himself was a father and he was also a cop. So Danny believed more than anyone that someone shouldn’t be able to just grab a gun off the street and go on a rampage whenever he liked but he told Kyle that no one would remember his message if the judge died.

Danny also went on to say that all anyone would take away from what happened at the courtroom was that another mass shooter had tried to take on everyone. But then Danny said that Kyle could away from that by carrying out his true intentions and giving up his guns now before anyone else got hurt. And so that’s what Kyle chose to do.

Kyle surrendered and the judge got to live. Yet, Kono’s day hadn’t truly been done with Kyle’s arrest. Kono had promised her husband that she would help him find a friend from prison’s daughter and that’s what she did though she also went with Adam went they reunited the Kalama family. So for now Kono got to be happy with Adam. And technically there were still a few weeks before Kelly had to give up Sara to some of her untrustworthy realtives.