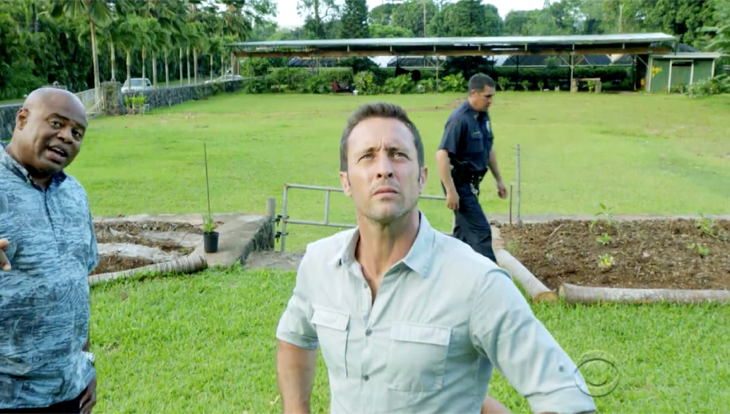 Tonight on CBS Hawaii Five-0 air with an all-new Friday, October 7, 2016, episode and we have your Hawaii Five-0 recap below.  On tonight’s Hawaii Five-0 Kono (Grace Park) reconnects with a former surfing competitor who is now a disabled and homeless war veteran.

Did you watch last season’s Hawaii Five-0 where Hawaii Five-0 McGarrett and Danny asked retired FBI profiler Alicia Brown to help them find a serial killer vigilante.? If you missed it we have a full and detailed Hawaii Five-0 recap, right here.

On tonight’s Hawaii Five-0 season 6 episode 3, “When FBI Profiler Alicia Brown (Claire Forlani) finds a body in her bed, she is forced to join McGarrett in the hunt for the chess-piece killer. Also, Kono reconnects with a former surfing competitor (Kanya Sesser), who is now a disabled and homeless war vet.”

Dr. Alicia Brown hadn’t wanted to get involved with the serial killer case however McGarrett and Danny had convinced her to help. So that’s what she did. Alicia found out that all the serial killers were being investigated by HPD Officer Phillip Lau when Phillip was off the clock, but her investigation had ended with Phillip. Phillip had killed himself six months ago and anything he might have found was unfortunately lost with him. But for some reason the serial killer didn’t like it that Alicia had gotten so close because she woken up next to a dead body on tonight’s all new episode of “Hawaii Five-0”.

Alicia had practically been in retirement before the guys found her, but after waking up next to a body and finding out that her home was suddenly a crime scene, she told McGarrett that she was on the case whether she wanted to be or not. So Alicia had agreed to help out Five-0 with their serial killer case from now on. Though no one knew what the dead body was about. Fingerprints said that the dead body was Ben Rhodes and that he had been a transient so it was a little confusing why the serial killer would target him much less put a pawn piece in his mouth. And so Five-0 was investigating that at the same time they were looking into the murder of a DEA Agent.

Special Agent Hank Evers had crash dived into a house and the only witness to the event had been shot to death. So Five-0 were already thinking that someone on that plane had wiped out the DEA agent and had parachuted safely to the ground when they decided to kill the only eye-witness though their theory wasn’t proved until they got into contact with Evers’s superior. Ben Halanu had said that Evers and the pilot were taking known criminal Hector Frontera into custody when their plane never landed. It had sadly just crashed. Hector had gotten some type of warning about what he was going to expect on the ground so he had killed three people just to make his escape.

Frontera had killed Evers, the pilot, and the eye-witness. Yet, what Ben wanted to know was who he tipped him off. Ben and Evers had been running a tight ship so Frontera wasn’t supposed to know that he’d be surround on the ground. So Five-0 helped Ben take into custody one of Frontera’s known associates and Armando Sanchez was eventually made to answer their questions. Sanchez knew that Five-0 didn’t have to do things by the book because they simply keep down in the basement without offering him any legal representation so Sanchez talked. Sanchez told them that Amy Raine had given Evers up.

Special Agent Amy Raine had told Frontera that he was going to be moved into custody so she had helped him even though it went against everything she had been taught. However, Frontera didn’t know anything about loyalty because he soon moved against Amy and killed her before either Ben or Five-0 could bring her in. So McGarrett had seen Frontera running from the scene and he pursued him so Frontera had accidentally dropped his bag of valuables. Frontera was apparently going on the run with all of his assets in one bag and he had dropped the bag as he was running away.

So Frontera had burned himself by making that one stupid mistake. He had no money, he was fast running out of friends because he was going to testify against them, and unfortunately everyone was chasing him. Though what makes that unfortunate was the fact that it made Five-0’s job harder. They had later found themselves shut out of the case by Ben and they had also seen a blacked car at the crime scene yet there might be an answer about that car. Five-0 had checked out Amy’s burner cell and they had found out that was turning Fronterra into someone outside of the DEA. And that she had slept with him to keep at her place until these people could come for him.

Amy therefore had been worse than a turncoat. She had actually sold another agent in order to make a quick buck with the DEA’s worst enemies. But while McGarret was interested in finding out what else Amy might have been hiding, he had also gotten a call from Alicia. Alicia had exhumed Phillip Lau’s body and she found evidence that Phillip had been murdered. So Phillip had gotten close to the serial killer because his death had been the only one that hadn’t been planned. The serial killer or the Unsub as Alicia was calling him was meticulous about who should die and how they should be though Phillip’s faked suicide had been sloppy at best so that gave Alicia hope.

Alicia said they could run every analysis on Phillip Lau to see if there was still evidence on him and she thought they could get closer to finding the killer based on what a new autopsy would find. Yet, McGarret had wanted to know how Alicia got the coroner to agree to a new autopsy and it turns out she had used his name as well as faked his signature. So McGarrett was willing to overlook that and Alicia had said that she would stay on looking into Phillip when McGarrett got pulled away to his other case. Frontera had apparently been found by the people that were following him and those same guys had wanted to make a trade.

The armed group had turned on the cartel that hired them because they wanted to trade Frontera for the ten million he had accidentally left back at Amy’s house. So McGarrett had agreed to the trade, but like expected he double crossed them by putting Kono in the bag instead of filling it up with the money. Kono was small enough and she was a pretty good shot. When the cartel’s men opened the bag, she shot all of them and had told McGarrett that she never wanted to be put in a bag again. And he had said sure because he knew how dangerous Kono could be.

Kono though could also be sweet and supportive. A girl she had known during their PGN days had come back into her life and she had allowed her friend to make it back on her own feet without assistance because she knew that’s what Rosey wanted. However, Rosey needed to know that she could still surf despite losing her legs overseas during an attack on her convo. So Kono later took Rosey surfing so that they could remember their glory days.

But when Alicia and McGarrett met up to see what Phillip might have found, they ended up crossing paths with the same people and one of them had a book on medieval chess.

Her name had been Madison Gray.