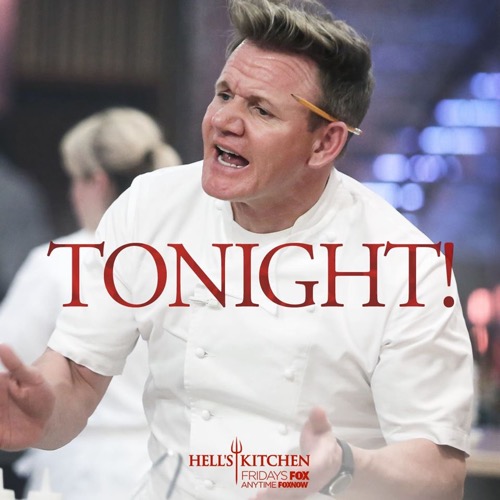 Tonight on NBC their Gordon Ramsay culinary competition series Hell’s Kitchen airs with an all new Friday, October 14, 2016, season 16 episode 4 and we have your Hell’s Kitchen recap below.  On tonight’s Hell’s Kitchen episode, the contestants compete in a surf and turf protein relay for the chance to win a day of surfing at the Wavehouse in San Diego.

Did you watch last week’s Hell’s Kitchen season 16 episode 3 where Gordon greeted the chefs with a surprising selection of meat as each team will need to prepare eight unique dishes using a selection of ostrich cuts. The rest of their ingredients were selected as the contestants took turns breaking through giant ostrich eggs to collect as many ingredients as they could in just four minutes. ? If you missed it we have a full and detailed recap, right here!

On tonight’s Hell’s Kitchen season 16 premiere as per the NBC synopsis, “hef Ramsay introduces the contestants to the latest challenge – a Surf & Turf protein relay. As the teams struggle to identify their proteins, they must work together in pairs to succeed in the challenge. The winning team will spend the day surfing at the Wavehouse in San Diego, CA, while the losing team will find themselves spending the day making sausages from scratch. Later, during the dinner service, Ramsay informs the teams that tonight they will need to cook with extra confidence because they will be welcoming a VIP 12-top.”

Tonight’s episode of Hell’s Kitchen begins with Chef Gordon Ramsay greeting the chefs in the morning, with a huge display of proteins. The competition is all about ‘Surf & Turf’. The challenge this morning is to have the blue and red teams separate into teams of two, where one at a time they will taste the dish and run into the dining room, grab the correct protein and place it next to the dish.

When both proteins are correct, the plate color will turn green, if both are wrong it will turn red, but if one is right, it will turn yellow, but Chef Ramsay will not tell them which one is the right one. The team that gets all 4 plates correct, wins the challenge.

The Red Team goes first with Heidi and Ryan are up first for the Red team and the dish is Shrimp and Guinea fowl. It took them 2:17 minutes to get it correct. Gia and Kimberly have Venison and Bay Scallop; their time is 2:10 minutes. Shaina and Aziza have Squab and Octapus and it takes them 7:44 minutes to figure it out. Heather and Wendy are up last for the Red Team, they have Monkfish and Buffalo. 1:30 minutes for them.

The Blue Team is up and they need to beat 13:41 minutes to win the challenge. Paulie and Johnny are up first, their time is 2:13. Up next is Aaron and Andrew it took them only :54 seconds, first try! Koop and Devin are up for the third dish and end up taking 3:08 minutes to figure it out. The last team up is Paulie and Matt, the team is screaming at them, telling them to pick something. Their time is 3:31 minutes and they beat the Red Team by 3:55 minutes, and win the challenge.

The Blue Team wins a day of surfing in San Diego, and since Chef Ramsay wants them to have a great time, he is sending them to The Wavehouse, which has the best place for artificial waves. The men leave excited. The Red Team lost, so their punishment is to spend the day making sausages from scratch, and Sous Chef Andi is going to make them a special lunch!

The women are busy making sausages and crude jokes, while Chef Andi looks on, shaking her head. The men are at the Wavehouse and none of them have surfed before. Most of them are wiping out, but they are having the time of their lives. Back in Hell’s Kitchen, Chef Andi serves the women lunch and tells them they have to eat whatever is in front of them, including spiders and testicles.

The men are back in the Hell’s Kitchen house and are plotting how they are going to take the Red Team out. Their first target is Kimberly; last week they made Jessica cry and she has gone home, so the next weakest link is Kimberly according to Johnny, who admits he likes to make them cry.

Johnny walks into the house and starts calling Kim a rat face. Kim laughs at him, tells him off and says the Blue Team are all sheep and she is a wolf who will definitely bite back! When Kim tells him to be respectful, Andrew chimes in and calls her names and tells her she will be long gone before Johnny.

Hell’s Kitchen’s Blue Team is desperate to keep their winning streak alive. They are working well together. The Red Team is trying to rebuild their momentum. Chef Ramsay gathers the teams before opening to announce that they have a VIP 12-top tonight, split into 2 tables of 6 but it will be treated as a 12-top. He gives them a bit of advice, telling the chefs to not over think it, and to cook with confidence.

Marino opens Hell’s Kitchen. Pooch Hall from Ray Donovan is in the restaurant tonight. Marino shows the chefs, Wendy for the Red team and Devin for the Blue Team, how to do the tableside appetizer of mussels and sausage.

Aziza is on the fish station and she deep fries the scallops, which sets the team back already. Koop is acting over confident and says he has cooked every protein at his station, but he serves cold, raw Lobster and he slows the Blue Team, but only for a moment. Appetizers are going out to satisfied Blue diners. Aziza recovers and now the Red Team serves the appetizers. Both teams are on to entrees.

Hell’s Kitchen’s 12-top is half filled with pregnant women, and Chef Ramsay warns both Teams to be careful how they cook. On the Red Team, the Salmon is ready and the Beef Wellingtons are ready but Gia is taking her own time to make the garnish. Gia is getting mouthy and Ramsay is not impressed. The pregnant women and guests are getting impatient, and are very hungry.

Blue Team hasn’t had many issues until Ramsay is served raw salmon, and he yells at them, telling them there is NO SUSHI on the menu and punches right through the salmon. It’s only 45 minutes into dinner service and now the 12-top of pregnant ladies is not going to stick around.

Back to the Red Team, Gia is sinking the whole team, she over-cooked the beans and they are drowning in butter and she is short 1 ½ portions. Gia throws her arms in the air, when Ramsay asks her what that is about. She says it is her just saying she is listening. Gia is complaining that Ramsay is picking on her. The Red Team manages to serve half of the 12-top, they are now waiting on the Blue Team. Chef compliments Aaron on his cook on the meat.

The Blue Team’s Andrew is pushing the whole Blue Team but Aaron is not speaking at all. Chef Ramsay is angry that he isn’t using his voice. Aaron’s meat is cut and raw, the sea bass is burnt and Ramsay kicks the entire team out. Ramsay says he is done, he has never seen such disarray and he wants them to go to the dorm and come up with 2 nominees. The Red Team works hard to finish their last ticket, he says the lamb is perfectly cooked and well done!

Blue Team is arguing about who to nominate. Andrew is fighting to keep Aaron. He thinks Devin should go up with Koop. Koop is making the same mistake Jessica did last week, he said obviously he is one of the nominees; but will Ramsay agree? He asks Johnny who was nominated.

Johnny says Koop because he had trouble putting out fish, and that is where the problems all started. Second nominee was Aaron and Johnny says that although he had some nice pieces of meat leave the kitchen, they feel like they consistently need to hold Aaron’s hand. Koop says he is definitely better than Aaron. Aaron is forced to admit that he did ask Andrew repeatedly to check the temperature.

Chef Ramsay shocks everybody and chooses Gia to go home. He says she was already on thin ice when they started dinner service and her brigade/team has lost faith in her, and she isn’t ready to step into the Venetian Hotel in Las Vegas.

“I gave Gia a second chance, which proved to be two chances too many! See ya Gia!”