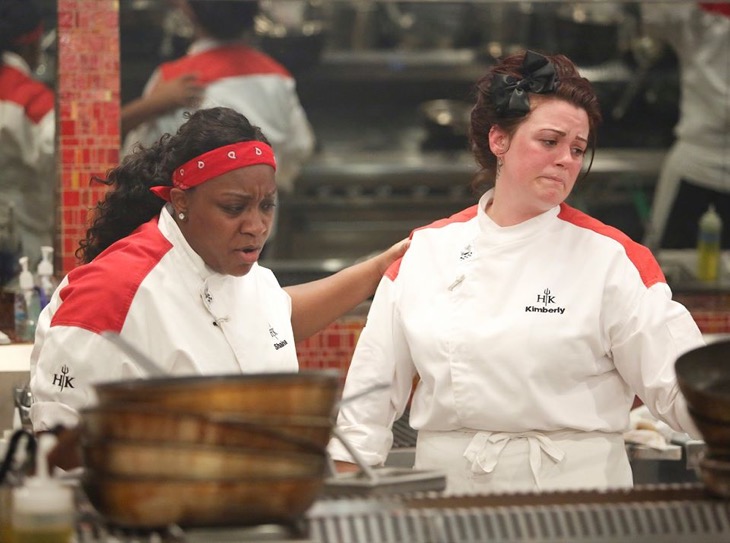 Tonight on NBC their Gordon Ramsay culinary competition series Hell’s Kitchen airs with an all new Friday, October 7, 2016, season 16 episode 3 and we have your Hell’s Kitchen recap below.  On tonight’s Hell’s Kitchen episode, While the winners get to go to Big Bear for a zip-lining excursion, the losing chefs have to pluck pine nuts out of pinecones.

Did you watch last week’s Hell’s Kitchen season 16 episode 2 where the teams went head-to-head during the first-ever HELL’S KITCHEN Crepe Grand Prix challenge, with the contestants racing to present Chef Ramsay with 10 acceptable savory crepes? If you missed it we have a full and detailed recap, right here!

On tonight’s Hell’s Kitchen season 16 premiere as per the NBC synopsis, “With tensions running high in the house, the chefs must set aside their feelings and prepare for their next challenge. This week, Gordon greets the chefs with a surprising selection of meat as each team will need to prepare eight unique dishes using a selection of ostrich cuts. The rest of their ingredients will be selected as the contestants take turns breaking through giant ostrich eggs to collect as many ingredients as they can in just four minutes. Gordon has recruited special guest judges, David McMillan and Frederic Morin, the chefs/owners of Joe Beef, to help critique this week’s challenge.

At the end of the night when the Blue team lost, Jessica is digging in deep how the red team rocks, causing major tension in the house for both teams. Some can’t stand Jessica, and others feel the guys are being bullies, who can’t handle it when it is thrown back in their faces.

Instead the challenge will be cooking with Ostrich meat, creating 8 different dishes, as for the rest of the ingredients, each chef has to run, one at a time, breaking an egg open to reveal what the ingredient is, and then place it on their team’s board. They have 4 minutes. The teams may use as many or as little of those ingredients they want, once the board is full, they may swap it for another ingredient.

The prize for the challenge is a trip to Big Bear where they will be zip-lining. Chef Ramsay has arranged for two private jets for the women to travel in style. The punishment for the men a delivery of raw pine nuts. They need to crack open each pinecone and get the pine nut, which are to be made into a pesto sauce to be used table side at dinner service tomorrow service. They also need to clean all the raw egg mess in the dining room.

As the women are flying high, literally, enjoying their time in Big Bear, the men are stuck back in Hell’s Kitchen cleaning the dining room, where Marino is to observe them and make sure it is spotless. Marino notices teammate Matt has disappeared. All the men remaining, have decided that they all want Matt gone, Marino tells Aaron to go get Matt. Matt gets aggressive with Aaron and tells him to go, that he is packing his stuff and leaving!

Matt is acting like a child, but is being explosive and ignorant towards Aaron, who reports back to Marino that he is packing up and leaving. Aaron Mitrano, Ramsay’s Sous Chef for the Blue Team, tells Matt that Ramsay wants to talk to him. Ramsay speaks with Matt, and tells him that they will have a fair shake and that this journey has up and downs, is about fun times, hard times, and sad times like life.

Matt feels that Chef Ramsay is giving him a chance and saved him from making a huge mistake. When he returns at the end of the clean-up, the Blue Team is furious that he is still there and promise to put him up on the block at tomorrow night’s dinner. Johnny claims he is the one the whole team listens to, and since he hates Matt, they will all listen to him.

Both teams are prepping for dinner service and Gia is doing nothing. When confronted, she walks out of the kitchen. One member of the Red Team, Heather says she wouldn’t mind losing to just get rid of Gia. Marino opens Hell’s Kitchen for dinner. Jessica will be working table side for the Red Team and Andrew will be working, in the restaurant for the Blue Team.

Paulie’s refire of the scallops is a mess again, he went from raw to burnt. Matt joins to help Paulie and they end up perfect. Did Matt just redeem himself? Gia is back to bring another order of Lamb to Chef Ramsay and now she is delivering it overcooked. Matt seems to step up and is trying to work with the Blue Team and encouraging everyone. Gia gives him a Wellington that is not even cut open properly.

Red Team’s Gia seems to be in a bit of trouble when she informs Chef Ramsay that she cut her finger off, and she was sorry. Ramsay calls Medic when Gia says it is really bad. You can hear Chef Ramsay freaking out, and calls her a drama queen when there isn’t even a drop of blood on her hand. Just as the Blue Team is so close to winning, they serve Chef Ramsay burnt mashed potatoes; he forces them to each take a bite and orders for stunning mashed potatoes.

Marino catches Red Team’s Jessica serving a disgusting mushy dish at table side and Chef Ramsay confronts Jessica, who swears it was just a fluke. Ramsay goes on to show them that he just got served two raw Salmon and two Beef Wellingtons are raw, and he kicks the Red Team out of the kitchen. The Blue Team finishes dinner service on a high note and the Red Team needs to nominate two people.

Red Team’s Heidi is asked for their choices and they nominate Gia and Jessica. Jessica offers herself up as a nominee, which is not a good sign in Chef Ramsay’s eyes. Kimberly opens her mouth when Gia says she is always helping her team, and Kimberly says everything Gia is saying is a lie, that she is nasty and doesn’t help the team. Gia says Jessica is already packed and Gia is not, so she isn’t going home. Jessica packed and Chef Ramsay says he doesn’t have faith in her, and she needs to go home.

“A chef who can’t handle confrontation, is like a Boxer who doesn’t want to get hit. Jessica just threw in the towel.”
~ Chef Gordon Ramsay