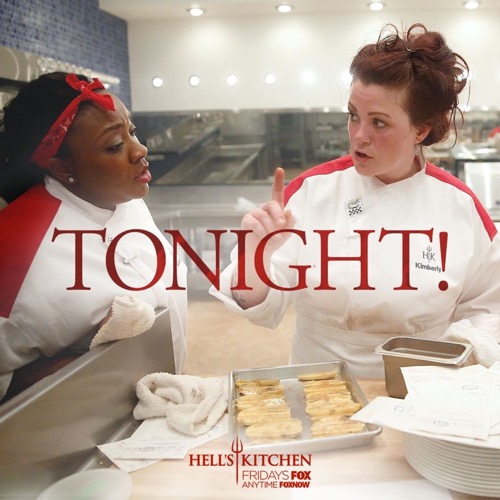 Tonight on NBC their Gordon Ramsay culinary competition series Hell’s Kitchen airs with an all new Friday, Septemeber 30, 2016, season 16 episode 2 and we have your Hell’s Kitchen recap below.  On tonight’s Hell’s Kitchen episode, the contestants race in the first annual Crepe Grand Prix challenge for the chance to win a luxurious dining experience on a yacht in Santa Barbara.

Did you watch last week’s Hell’s Kitchen season 16 premiere where we met the 18 hopeful chefs that wanted to show they had what it took to survive? If you missed it we have a full and detailed recap, right here!

On tonight’s Hell’s Kitchen season 16 premiere as per the NBC synopsis, “The teams go head-to-head during the first-ever HELL’S KITCHEN Crepe Grand Prix challenge, with the contestants racing to present Chef Ramsay with 10 acceptable savory crepes. The winning team will head to Santa Barbara for a luxurious dining experience on a yacht. Meanwhile, the losing team will face a fishy punishment as they take on the responsibility of handling fish delivery day.”

As the first Hell’s Kitchen contestant, Pat has been eliminated, we are back for episode 2. Most of the men jump in the hot tub and get butt-naked. The women are laughing and insist on seeing a “Weiner Schnitzel”, to which the men oblige. Let’s see what Chef Gordon Ramsay has planned for the chefs today.

Hell’s Kitchen’s Sous Chef, Andi Van Willigan calls up and tells the chefs that Ramsay wants them all down at the SUVs. They arrive at a raceway, and of course Gordon Ramsay is racing around the track. He tells the chefs that racing and cooking are very technical, where you have to adapt to what is happening, but more importantly, you have to stay in control, even the slightest mistake can lead to a huge disaster.

The contestants race in the first annual Crepe Grand Prix challenge for the chance to win a luxurious dining experience on a yacht in Santa Barbara. Later, one team struggles right out of the gate during a dinner service featuring VIP guests….

Hell’s Kitchen continues with the men returning from their day on the yacht, and the women are not too impressed with them, referring to them as the “Village People”. As Chef Gordon Ramsay gathers the teams before the dinner service, he reveals that one of the women has a good shake, and Shaina admits it was her. Her team is livid, and now consider her untrustworthy, could this place a target on their back?

Marino opens Hell’s Kitchen and some celebrities arrive for dinner, including Noureen DeWulf from Anger Management and Dash Mihok from Ray Donovan. Chef Ramsay has decided to add a table side appetizer of Dover Sole to his menu. Heidi and Shaina for the Red Team and Johnny and Paulie for the Blue Team.

So far the Red team is able to bounce back quickly after a minor blunder from Jessica. The Blue team is already going downhill. They present a salad, but it is so overdressed that its dripping when Ramsay squeezes it in his hands. Gia approaches Chef Ramsay as he is still calling out appetizers, and asks him if he wants her to make more pudding for dessert. Ramsay looks at her dumbfounded and tells her they need to get through appetizers and entrée before dessert.

Hell’s Kitchen’s Blue team are all working together, but as Aaron is asking Andrew if he needs anything, he doesn’t answer, and when they ask about the scallops, he still doesn’t respond. He is drowning his own team, and Aaron tells Ramsay that its Andrew they are waiting on. Ramsay gets upset because the scallops are still not in the pan.

Aaron is told to make pizzas, but Ramsay stops him when he sees Aaron put two pizzas on one paddle, and the dough is not even rolled out. Paulie takes over on the pizzas, and they are sent out no problem. When they get their first entrees, Genaro sends up raw New York strip, which forces the entire order to be remade.

Red team is rocking it, until they start the entrees. Kimberly is the only one on meat, but others agree she is going to need some support with it. The first entrée comes back as raw Lamb, Ramsay tells her to put it back in the oven, but isn’t impressed when she tells him she knew it was raw. Kimberly manages to quickly bounce back.

Hell’s Kitchen chef Genaro refires his New York strip and as the entire dish is presented to the pass, it is raw and cold again. Ramsay calls both the Red team and Blue team together. It is an hour and a half into dinner service, the Blue team is told to get out and the Red team takes over the Blue kitchen. Chef Gordon Ramsay follows them out and orders them to choose two chefs to be eliminated. The Red Team kick butt and finish dinner service for both kitchens for the second time in a row.

The Blue team argue about who should go up, Genaro seems to be a unanimous decision, but the second nominee isn’t, some chose Aaron and some think it should be Andrew. They chose Genaro and Aaron. Chef Gordon Ramsay asks why they should stay in Hell’s Kitchen. Surprisingly he sends Genaro home, and tells Aaron to wake up!

“When a chef shows me, he has no passion. I show him the door. Goodbye, Genaro!”

Be sure to tune in to Hell’s Kitchen next Monday on FOX. Check back often for updates, news, rumors and spoilers!