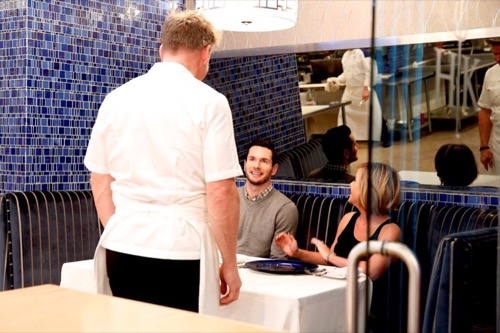 Tonight on NBC their Gordon Ramsay culinary competition series Hell’s Kitchen airs with an all new Friday, November 11, 2016, season 16 episode 7 and we have your Hell’s Kitchen recap below.  On tonight’s Hell’s Kitchen episode, stress levels rise and Ramsay makes a shocking decision.

Did you watch last week’s Hell’s Kitchen season 16 episode 6 where the remaining contestants used cookbooks from Gordon’s HELL’S KITCHEN library to spell out the ingredients they wanted to use for their next challenge. During the Ingredient Crossword Challenge, they had 25 minutes to use as many or as few ingredients they successfully spelled out? If you missed it we have a full and detailed recap, right here!

On tonight’s Hell’s Kitchen episode as per the NBC synopsis, “The remaining contestants are tasked with cooking their own interpretation of a southern staple, and are judged by Chef Ramsay and surprise guest judge Chris Hastings, the executive chef of Hot and Hot Fish Club.  The dinner service begins with determination to impress Chef Ramsay and the VIP Guests: NBA player J.J Redick, recording artist Blake Lewis, actress Mircea Monroe and entrepreneur and reality TV star Adrienne Maloof.”

The episode begins with Andrew and Heather cuddling up together and he asks her if she wants to make out. He appears to be joking but admits that he is getting married in a few months. Chef Gordon Ramsay calls the teams down to the Red kitchen, where they see some people painting, including Marino.

He says that cooking is like painting, that four people are painting the exact same thing but expressing it in their own personal style. Chefs use their plate as a canvas and their food is their style/art. The challenge today is to make their own interpretations of their own Southern dishes. Sous chefs Aaron and Andi bring out serving tables with three domes on it.

Chef Ramsay wants one person from each team to stand behind one of the domes. Each dome will have one red team member and one blue team member, and they will be competing against each other. They have 40 minutes to create their dishes and they will be judged by Chef Ramsay and guest judge Chris Hastings, the owner and executive chef of Hot & Hot Fish Club. He also competed and beat Bobby Flay in Iron Chef America.

During preparations of their dishes, Koop was slicing celery and literally sliced his whole nail off his finger and is taken to see the medics. Koop feels light-headed, and after telling the medic that, he appears unresponsive. He vomits while passed out, the medic puts an oxygen mask on him, when he comes to he has no idea what happened.

Shaina and Johnny will be cooking Hanger steak. Johnny’s dish is bloody and bland, while Shaina’s is spicy and delicious. Shaina gets the point.

Paulie and Wendy will be cooking catfish. Wendy’s dish is beautifully cooked, tasty and Chris says he loves it. Paulie’s dish receives high praise as well, and both get a point for their team.

Matt and Ryan will be cooking fried chicken. Ryan’s chicken is cooked well, and seasoned well, with lots of flavor and delicious. Matt’s dish is compared to diner food, with no flavor or magic to it at all. Chef Ramsay said he gets bored just eating it. Ryan is the clear winner and gets the point.

Koop and Heidi will be cooking shrimp because Koop sliced his finger, he was unable to participate in the challenge, so Heidi is solo on the shrimp dish. Chef Ramsay says he is underwhelmed and Chris agrees that the dish is not even worth a point. So no point for either team on the shrimp.

Andrew and Heather will be cooking Pork Chops., everyone is joking about these dishes being a “lover’s quarrel: pork edition.” Heather’s dish is okay, but the pork is dry. Andrew’s dish is the winner, and gains a point for the blue team.

Devin and Kimberly are cooking trout. Chris says everything in the South is breaded, but Devin’s trout was overly breaded. Kimberly’s dish doesn’t get much praise either as Chris tells her it is too sugary. With the score 3-2 for the red team, this point is desperately needed for the Blue team to stay in the challenge.

Chris decides that neither team deserves the point, so the red team wins the challenge. Chef Ramsay announces that the best overall dish in this challenge goes to Wendy. Chris Hastings wishes them all luck and exits Hell’s Kitchen.

The reward for winning the challenge is horseback riding, and for their lunch Ramsay has arranged for the most popular food truck in Los Angeles to come out to the ranch to serve them Wings and Waffles, Southern-inspired soul food. He tells the women to get out of there and to have some fun.

The losing team, the Blue team’s punishment is them working on a shrimp and grits appetizer for dinner service. The grits have not been processed, meaning they have to grind all the little pieces of corn into grits. Once they are done with the grits, they must shell, devein and clean hundreds and hundreds of shrimp, and when that is done, they are to prepare both kitchens for tonight’s dinner service.

The girls are having a blast at the ranch, all of them making fun of Wendy, insisting she must miss her husband a lot. Back in Hell’s Kitchen, the men are not happy with their punishment. Koop leaves the kitchen, saying he is done and emotionally drained. He says he is on the verge of leaving Hell’s Kitchen.

Koop returns and the Blue team encourage him, insisting they win so no one goes home tonight. The women are enjoying their Southern food at the ranch and highly praising Wendy’s number one dish. Once back at Hell’s Kitchen, the women dress and prep for dinner service, determined to win it.

The VIPs for tonight’s dinner service has NBA’s Los Angeles Clippers J.J. Redick at the Blue team’s Chef Table and TV personality, star of Real Housewives of Beverly Hills Adrienne Maloof at the Red team’s Chef table. Chef Ramsay decided to add a table side appetizer of shrimp and grits served by Devin for the Blue team and Ryan for the Red team. Chef Ramsay orders them to bring their “A” game and asks Marino to open Hell’s Kitchen.

The Blue team starts arguing right away when Matt asks Johnny if he needs help with his appetizers, Johnny says he can do it all by himself, and he proves himself right when Chef Ramsay is able to send out his first risotto without an issue. Kimberly is making Carbonara and is paranoid because it is the hardest dish so far, even though Ramsay tells her to piss off, he tells her the dish is good. Both teams are off to their best starts yet.

Blue team is starting entrees, and although they are communicating well Andrew makes a soggy fish dish, and Ramsay gets upset. Andrew brings a second round of the fish and it is perfect. The Red team is working hard and everything is coming out perfectly. The team is nervous about Shaina working alone on a station, and they are right when they see Shaina serving dry chicken.

Everyone is eating at the VIP chef table, except for Adrienne Maloof. Shaina screws up again and serves raw chicken. Shaina comes with her third attempt and it is perfect. Ramsay tells her to serve Adrienne herself and she asks Andi which one is Adrienne. Andi looks at her and sarcastically tells her that she is the one with no food in front of her! She serves her and apologizes.

The Red team was rocking dishes out, and then Wendy serves raw catfish to the window. Ramsay is upset that the Chef table VIPs are looking at him like he is an idiot. Heidi yells at the team to communicate. The Red team work very hard and it shows. Kimberly forces things to be moved so she can start the desserts at Chef Ramsay’s request.

Shaina is furious that her meat was removed from one oven to another, blaming the temperature drop on her mistake. Kimberly is angry because it had nothing to do with the switch over; one of the Wellingtons was raw and another overcooked. She refires and brings Chef Ramsay Beef Wellingtons that are ice cold and Wendy brings up raw catfish again. He kicks out the entire Red team, who take their walk of shame and need to come up with nominations.

Koop serves raw Beef Wellington to the window and attempts to correct his mistake. The Blue team work hard together and are able to pull it tighter when they see the red team has been kicked out. They finish dinner service and now the women are debating who should be put up for elimination.

Chef Ramsay asks Heather who the red team has chosen, they put up Wendy and Shaina. In the end Chef Gordon Ramsay shocks everyone when he says he needs to do something drastic. He decides to switch Shaina and Wendy to the Blue team; and bring Matt and Andrew to the Red team. He says he hopes the change of environment will bring them back to their earlier performances.

“In Vegas, shuffling a debt gives a gambler a new chance for a better hand, I’m hoping this switch doesn’t end up being a bust.
~ Chef Gordon Ramsay