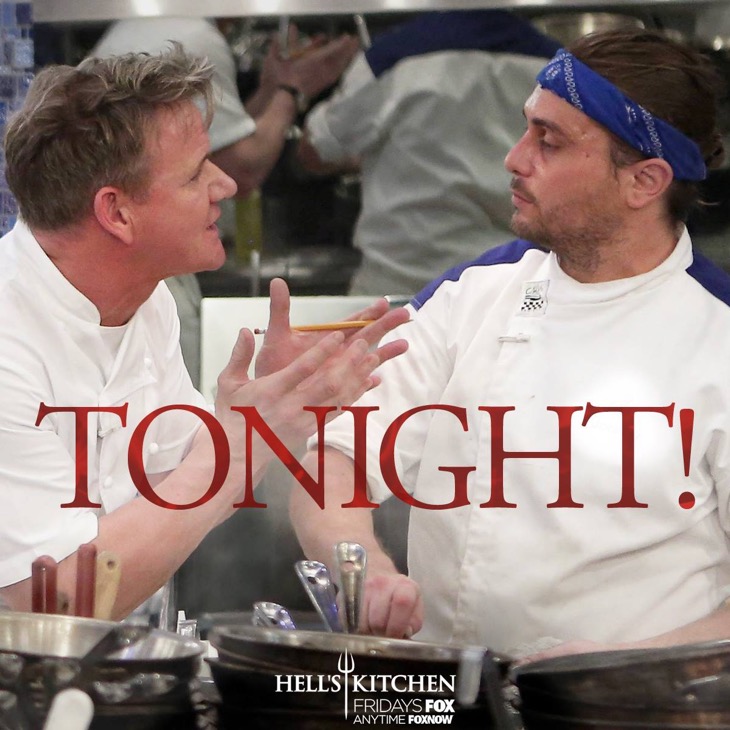 Tonight on NBC their Gordon Ramsay culinary competition series Hell’s Kitchen airs with an all new Friday, November 4, 2016, season 16 episode 6 and we have your Hell’s Kitchen recap below.  On tonight’s Hell’s Kitchen episode, the remaining contestants take part in an Ingredient Crossword Challenge.

Did you watch last week’s Hell’s Kitchen season 16 episode 5 where after a shocking elimination, both teams must regroup and chart a new course? During The Seven Seas Seafood Challenge, the chefs went head-to-head against a chef of their choice from the opposing team? If you missed it we have a full and detailed recap, right here!

On tonight’s Hell’s Kitchen episode as per the NBC synopsis, “The remaining contestants use cookbooks from Gordon’s HELL’S KITCHEN library to spell out the ingredients they want to use for their next challenge. During this week’s Ingredient Crossword Challenge, they’ll have 25 minutes to use as many or as few ingredients they’ve successfully spelled out. The losing team will spend their evening preparing for the upcoming dinner service, while the winning team will enjoy a night of fun that will include a delicious steak dinner and Ice Bunker cars.”

Hell’s Kitchen begins with Devin furious at his team for constantly putting him up, especially Andrew. Chef Gordon Ramsay meets the teams in the dining room filled with library books. He tells them cookbooks is the connection between libraries and the kitchen.

Today’s challenge is to use books to decide on what they are cooking. Ramsay tells them he hopes they can spell because they will be spelling out the ingredients to create their own dish. One at a time, a person from each team will select the books with the letters to spell out the ingredient they want to cook with.

Each teammate on the teams will have to select an ingredient that shares a letter with the first ingredient, creating it like a crossword puzzle. The Red and Blue teams have five minutes to complete this challenge. When the puzzles are completed, each chef has to 45 minutes to their own stunning dishes out of the ingredients on the board. Aziza’s dish is removed because the red team has 7 chefs and the blue only has 6.

Chef Ramsay agrees to taste all the Blue Team’s dishes first; Paulie gets a 1/5, and when he mutters to his own team ‘terrible’; Ramsay calls him on him being defensive and Paulie confronts him and asks if there was anything redeeming about his dish at all. Ramsay is a little perturbed and tells him that only thing good about his dish was the plate he served it on. Devin is up next and gets a 4/5. Matt brings his ribeye and crab dish next getting a 3/5. Johnny comes up and also gets 3/5. Koop brings up his Southern style dish and gets 4/5. Andrew is the last one for the Blue team, and although cocky, he only gets a 2/5. The Red team needs to beat 17 out of 30 to win the challenge.

Kimberly is up first for the Red team and they have a great start with a 4/5. Heidi is up with another 4/5. Wendy comes with her Latin-inspired dish, Chef Ramsay gives her a 2/5 saying the only thing sexy about her dish was the skin on the chicken. Heather’s dish does even worse when Chef Ramsay says it is hard to swallow and gives her a 1/5. Shaina makes Southern fried Chicken, but made it far too dry and gets a 1/5. The last dish up for the Red team is Ryan. Chef Ramsay repeatedly says wow and gives her a 4/5, so in spite of her good effort, the men win.

The punishment is that dinner service is going to be family night, and Marino is ready with a long list of chores for them, including balloons and decorating the dining room as well as making a special batch of cookies just for the kids. Marino comes in the dining room and drops an entire tub of crayons, and now the ladies need to separate all the crayons into little packs containing one of every color, ready for tomorrow night’s dinner service.

The reward for winning team is they are able to spend the rest of the day like kids, in bumper cars. The bumper cars will be on ice, and after they have had their fun, they are all going out to dinner at a great steakhouse, he tells them to get the hell out of there and sends the women off to work.

The Blue team are having a blast, smashing each other and then out for a great dinner while the women work hard but all are severally aggravated that Shaina is complaining and not doing much to help. As the Red team gets working on the making and baking of the cookies, they continuously ask Shaina to help in one way or another and she refuses everyone’s requests. Kimberly and Shaina begin to argue, and Shaina tells her to not make her go to that place. Kimberly tells her to leave her alone.

The Red team have managed to get through the day and in bed by 9:30pm, including Devin. The rest of the Blue team have a meeting and strategize their dinner service, and how to nominate if they lose.

The teams are called into the kitchen early because it’s Family Night and most of them are excited about the kids. They believe if the kids are happy then the parents are happy too. Chef Ramsay asks Marino to open Hell’s Kitchen for Family Night. On top of his usual menu, Chef Ramsay has added several kid-friendly items including Quesadilla stations run by Andrew for the Blue team and Kimberly for the Red team.

Blue team is off to a rough start when Devin isn’t even able to produce a proper grilled cheese sandwich. Devin makes another sandwich and it passes. The Red team isn’t doing any better when Shaina asks Heidi if her pizza is ready, and even after Heidi says it isn’t, she brings an undercooked pizza to Chef Ramsay at the window. Ramsay is angry that Shaina has three children at home and she is willing to serve kids raw dough.

The Red team’s Shaina redeems herself and the Red team are already starting entrees, but their good streak ends abruptly when Ramsay notices that Aziza has at least 7 pans of garnish cooking and only one table has been called and proteins haven’t even started cooking yet.

When Chef Ramsay goes back to check on the Blue team and they are serving him raw hamburgers to children, he pulls them all into the back room. Smashing plates and raw food into the garbage, the entire team says they need to help Paulie, as he appears to be their weakest link. Once Paulie’s dish is corrected, the Blue team tries to pull it together, but their communication is not happening.

Once again, they serve raw eggs and raw steaks. Ramsay gets so angry he tells Paulie to stop staring at him with his mouth open, or he will shove something in there. Entrees from the Red team are flying out of the kitchen, but when Ramsay asks Wendy, who is working on the meat station doesn’t answer until the fourth person yells at her’ then on top of that she serves lamb that “still has its wool on” according to Chef Ramsay it is also “ice cold and still running through the field”.

Guests are frustrated with both sides of the kitchen. When Heather is cooking the salmon, Ramsay warns her about the skin and over cooking it. Heather brings up the salmon and the skin is crispy but the salmon is raw, and he smashes it with his fist. He yells that they have been told like 27 times that salmon is always cooked skin side down!

Both teams are working on finishing dinner service and do complete it, but Chef Ramsay said it was embarrassing and there were problems on every station, but there clearly was a losing team. He says the Red Team and the Blue Team, ordering them both to pick 2 individuals from each team that they think should be going home.

The Blue team’s Johnny is asked who they nominated. He says Paulie, because the raw burger was a major problem. He then says the second nominee is Devin because he can’t even cook a proper grilled cheese. The Red team’s Ryan is asked who they have chosen to send home. She says Aziza that the garnish station was a disaster from the start. The second nominee is Wendy simply because it’s time to step it up and she cannot keep up. All four nominees are called to step forward, and when they plea their case with Chef Ramsay, he decides that Devin and Wendy can get back in line, but tells Aziza and Paulie this is their worst dinner service yet. He chooses Aziza to go home. He warns both teams that he will no longer tolerate this, and if it happens again, he will be cutting chefs at a lot faster rate.

“Aziza has four kids at home. I think they need her more than I do, unless of course, they are hungry!”