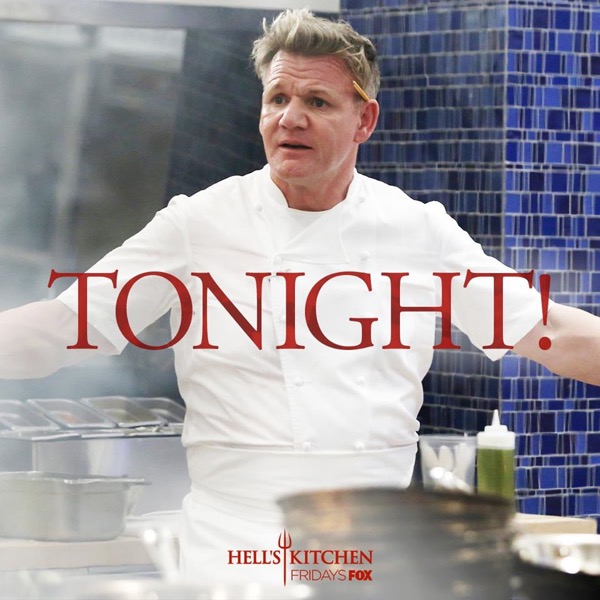 Tonight on NBC their Gordon Ramsay culinary competition series Hell’s Kitchen airs with an all new Friday, November 11, 2016, season 16 episode 8 “Dancing With the Chefs” and we have your Hell’s Kitchen recap below.  On tonight’s Hell’s Kitchen episode, as per the FOX synopsis, “A change leaves the chefs in shock as they prepare to host the International Ballroom Invitational. This special event calls for a special menu, which includes a raw bar that requires one team to break down lobster, scrub clams and oysters, and steam up crabs.”

Hell’s Kitchen begins with Chef Gordan Ramsay calling the chefs into the dining room, where there are ballroom dancers dancing all over the floor. Ramsay says although the dancers were entertaining, he didn’t bring them there for entertainment. He said they were rehearsing for tomorrow night where Hell’s Kitchen will be hosting its first-ever International Ballroom Invitational.

He continues to tell the chefs they will be making a unique menu to go along with the event. Jonathan Roberts and Michelle Johnston are there, not only to judge the dance competition but also the dishes the teams are about to make in the upcoming challenge. Michelle is asking for International foods to match with the international dancers. Jonathan is asking for dishes from around the world that will excite them.

The challenge is that each team needs to create 2 chicken, 2 fish, and 2 beef entrees, full of spice and packed with flavor. The teams chose who is cooking which protein and Chef Ramsay gives them 40 minutes to complete the dishes.

Ryan and Andrew are up for the Red team for a beef dish. Johnny is up and makes excuses that his dish looks bad because he ran out of time, Chef Ramsay tells him to cut it out, everyone had the same amount of time to create their dishes. Paulie is also from the blue team, and they are impressed with his dish. Ryan from the red team wins with her unusual dish.

The reward is the red team gets to go kayaking along the scenic view of the Santa Barbara mountains. After their sea adventures, they are going to California’s seafood restaurant, The Lark. Chef Ramsay tells them to stop staring at him and go enjoy their reward.

The punishment for the Blue Team is to clean all the seafood for the raw bar, which includes cleaning Oysters and Clams, and washed, he also wants them to break down hundreds of pounds of Lobster, and he expects to see the best raw bar ever!

The Red time is having a blast but everyone things that Andrew is a big man-child and is way too whiney. The dinner at The Lark was amazing and everyone is enjoying dinner. Everyone knows there is something going on between Heather and Andrew, and no one is too impressed by it. Meanwhile, the Blue team is hating that Wendy is on their team. Johnny even calls her a “seafood serial killer”, and the rest of the team is a bit concerned that there is something wrong with her.

The teams are called and Johnny is telling his whole team that they do not rest any of their seafood or fish. Ryan in the red team is teaching Andrew and Heidi how to make her winning dish from the challenge. Ryan gets really mad that Andrew is not listening to her, and insists that his way of doing it is better. Andrew convinces Matt to listen to Ryan because the red team has been winning more than them, so they know what they are talking about.

Chef Ramsay brings the teams together and gives them a pep talk before he asks Marino to open Hell’s Kitchen for dinner service. As they begin cooking, the dance competition starts in the dining room, some of the chefs are distracted by the looks of the dancers.

The blue team is already failing, Paulie is making risottos, but he has fired up five pans and Ramsay is upset. The red team isn’t any better, on their 8th dinner service they are serving burnt scallops. When Matt looks over to see what is going on, Chef Ramsay tells him there is no need to re-examine them, even Stevie Wonder knows they are that bad. Matt attempts to make another round of scallops.

Chef Ramsay returns to the blue kitchen, where Paulie and Wendy are able to produce great appetizers. In the Red kitchen, Matt is able to bring out eatable scallops, and they are working well together. The Blue team is starting entrees, and Wendy is observing that Johnny is not going to be able to get a good sear on his fish, and she is right when Chef Ramsay comes back with cold and raw sea bass.

Ramsay calls the blue team into the back, and asks his Sous Chef, Aaron Mitrano to take over. He is furious that Johnny isn’t searing any of the fish. Johnny is arguing that he didn’t know the fish needed to be seared off. Ramsay tells him the searing starts when they are working on appetizers. Johnny bounces back with acceptable sea bass, they continue with their entrees.

The red team is not working too well together. Kimberly is refusing to allow Ryan to help her; Kimberly feels that everyone is talking down to her. Ryan continues to attempt to help her. As the next round of dance competitors happens, Shaina is telling all the blue team to keep their eyes on the food and not the dancers. Chef Ramsay calls Ryan and Kimberly to the pass and tells them they did a great job and to keep it going; same with Matt and his fish.

The last dance competitors hit the dance floor, and the red team is starting on their desserts. The diners are still waiting for their blue team’s entrees. The rest of the team is yelling at Devin, who tells them the chicken isn’t ready and he needs a few more minutes, no one listens to him. Johnny grabs his chicken and brings it to the pass, where it is still pink. Chef Ramsay calls all the blue team into the back room.

Marino brings out the dancers, and they reveal the winner of the dance competition. The Blue team is in the dorms debating who should be going home. When the team comes back to the dining room, Devin announces that they have not come to a decision because they have 3 people chosen.

Shaina is asked who they nominated and she says Paulie, Johnny and Wendy. Chef Gordon Ramsay kicks out Johnny, telling him that by not searing the fish he completely screwed the kitchen. He tells Wendy and Paulie back into line, telling them to stop rushing, that he would rather wait for quality. He tells the Blue team to piss off, and thanks the Red team for their service.

“Johnny’s a burger chef from Philly. Unfortunately for him, the two words he’ll never hear from me are, well done.”
~ Chef Gordon Ramsay