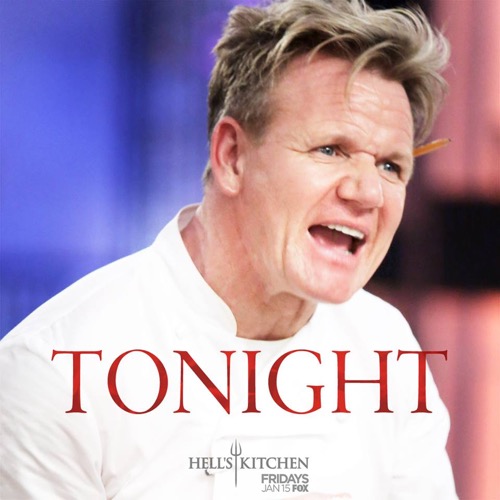 Tonight on NBC world renowned chef Gordon Ramsay’s television series Hell’s Kitchen where aspiring chefs compete returns with an all new Friday January 15, season 15 premiere called, “18 Chefs Compete,” and we have your weekly recap below. On tonight’s episode, season 15 begins with the newest bunch of contestants traveling to Las Vegas to see where the winning chef will work and preparing their signature dishes in that kitchen for the chance to win a ride on the High Roller Ferris wheel. Later, dinner service goes bad fast for one unlucky team.

On the last season finale, after a quick trip to Las Vegas to visit Season 10 winner Christina Wilson for some culinary motivation, the final two chefs returned to Los Angeles where Chef Ramsay had set the stage for the final challenge. The top two prepared five unique dishes to be judged by five of the most world renowned chefs. Then, in the most important dinner service of their lives, the top two faced off in epic battle for the final dinner service. Did you watch the last episode? If you missed it, we have a full and detailed recap right here for you.

On tonight’s episode as per the NBC synopsis, “in the Season 15 premiere of HELL’S KITCHEN, Chef Gordon Ramsay welcomes the newest bunch of contestants into the kitchen. The steaks are high when the contestants travel to Las Vegas and see the kitchen where this season’s winner will work as a Head Chef: BLT Steak at Bally’s Las Vegas. And, for the first time in HELL’S KITCHEN history, they will compete in that kitchen for the signature dish team challenge.

The winning team will earn a ride on the High Roller – the world’s tallest Ferris wheel – and get VIP service at Drai’s Nightclub, while the losing team prepares a Vegas buffet service, which includes peeling 50 lbs. of shrimp and 1,000 lbs. of potatoes. Later, during their first dinner service, one of the teams will fail early on in the service, prompting Chef Ramsay to kick them out of the kitchen. Find out which contestants will be safe from elimination and whose luck will run out.”

Season 18 of Hell’s Kitchen introduces us to 18 new cooks who show up at the Hells Kitchen restaurant to find a message from Chef Ramsey to meet him in Vegas. Everyone is excited about the trip and when they get there they are greeted by Carolyn Goodman, the Mayor of Las Vegas and participated in a parade along with season 10 winner Christina.

They were then greeted by Chef Ramsey who told that this year’s winner would become the head chef at BLT steak in Vegas. He also told them that the signature dish challenge would take place inside the prize BLT Steak restaurant.

In the signature dish challenge the men compete against the women and the dishes are judged on a scale from one to five points. The first dish Chef Ramsey tastes is made by a 30-year-old personal chef from Tennessee named Sherkenna. She made a crab stuffed salmon which chef Ramsey gave 2 out of 5 points stating that the presentation was “dreadful.” The second dish came from Eddie who made a Lamb tenderloin and scored 3 out of 5 points. The next two dishes came from Frank who is a Marine on active duty. He made a Penne alla vodka with grilled chicken which scored 3 out of 5. He went up against Ashley who works in her family’s restaurants in Orlando. She made an ostrich fillet with a Balsamic puree which scored a 2 out of 5.

Next up was Dani who is a line cook from Philadelphia. She made pan seared scallops which scored a 4 out of 5. She went up against Mark who cooked Mussels that did not impress and only scored 1 out of 5. As the challenge continued the men built a lead and the women continued not to impress. Vanessa did manage to tie the score until line cook Jared impressed with his halibut and scored 4 out of 5 points.

Line cook Jackie from Jersey with her seared scallop and corn dish which scored 3 out of 5 point. Kevin made a chicken cease salad pizza and committed two major faux pas. He didn’t make the dough or the salad dressing and Chef immediately asks if he wants to go home. His dish only scored 1 out of 5. Alan’s pan seared maple glazed salmon only scored one out of 5 while Kristen, a line cook from Chicago, impresses with her grilled pork tenderloin and score 3 out of 5. Chad scores 3 out of 5 with his partridge.

Amanda scores 3 out of 5 with her fried scallops The final chef is Hassan and he scores a 4 out of 5 winning the signature dish challenge. The men win the reward of boarding the high roller and then they get to go to Dray’s nightclub and sit in the VIP section. The ladies meanwhile will be peeling 50 pounds of shrimp and potatoes for the Sterling Buffet.

While the men were enjoying themselves at the club the women were stuck peeling shrimp and potatoes. Ariel complains about the girls who didn’t do their job and saying that they are the ones complaining the most.

When the chefs return to Los Angeles they settle in and get ready for their first dinner service. Jared takes an early leadership role. In the blue kitchen there is trouble as one of the men has to ask Chef Ramsey to repeat the order. Despite that slip up the blue team manages to get their appetizers out and get off to a good start.

On the red team Vanessa messes up the first appetizer pizza and chef calls her out on her first order. On the Blue side Alan oversteps and sends out entrees before they are called for causing chef Ramsey to call him a moron. In the red kitchen Vanessa once again messes up by sending out undercooked scallops while the blue team sends up rubbery scallops.

Guests are getting impatient for food an hour into dinner service so Frank steps up to take charge and that gets appetizers moving out of the kitchen. Eddie and Marc had to eat the messed up Risotto since they couldn’t seem to get it right.

In the red kitchen Sherkeena manages to cook the beef wellington beautifully. Meanwhile the blue kitchen can’t seem to get it together and Chef Ramsey has had enough and kicks the blue team out of the kitchen. Chef tells the men to go upstairs and decide on two men who do not belong on the blue team.

The women won the first night’s dinner service and the men nominated Mark because he burned the Pizza and the second nominee was Kevin due to his lack of skill. Chef says that he doesn’t know if either man can grow and wonders if both men should just go home now. Mark fought for his spot as did Kevin, but in the end Mark was sent home. Mark apologized to Chef Ramsey saying that he “wished he could do better for him.”