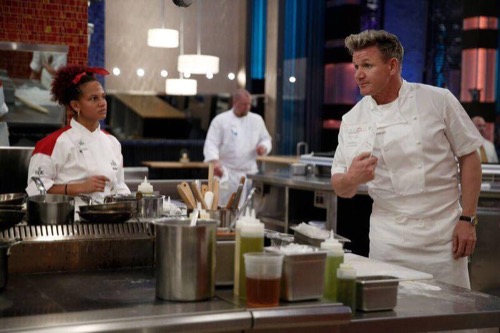 Tonight on NBC world renowned chef Gordon Ramsay’s television series Hell’s Kitchen where aspiring chefs compete returns with an all new Wednesday January 27, season 15 episode 3 called, “16 Chefs Compete,” and we have your weekly recap below. On tonight’s episode, a communication challenge comes with a relaxing retreat in Santa Barbara for the winning team. Later, the contestants cook for astronaut Buzz Aldrin.

On the last season finale, Chef Gordon Ramsay put both teams to the test when they were challenged to produce more shrimp dumplings than their opposing team in just 20 minutes. To make the challenge more difficult, Chef Ramsay sent out multiple rounds of distractions, testing the team’s attention to detail and concentration.

Later, the teams faced a tough dinner service when Grammy Award-winning rap artist “The Game” showed up unannounced. Find out which contestants up their game, and who must face elimination. Did you watch the last episode? If you missed it, we have a full and detailed recap right here for you.

On tonight’s episode as per the NBC synopsis, “after the contestants struggle to work together during opening night in the dining room, Chef Ramsay presents the red and blue teams with a communication challenge. Each contestant will wear a chef jacket with the dish they must complete written on the back of the jacket, while their teammates must read off the instructions to that contestant in order for him/her to properly prepare the dish.

The team that correctly completes the most dishes will win a relaxing retreat in Santa Barbara, while the losing team must prepare the kitchen for the next dinner service, which involves gutting 100 lbs. of seabass. Later, during the dinner service, the teams will cook their second dinner service for VIP guests, including astronaut Buzz Aldrin. Find out which team will deliver an out-of-this world successful dinner service, and which team will struggle to manage the simplest tasks.”

This week on Hells Kitchen the women are still stinging from the loss at dinner service. Meese calls Ariel out on her awful behavior from day one but says that she will have to forgive her. Ariel says that Meese should get a job as a telemarketer because she likes to talk about things that are irrelevant and is not qualified to work in a restaurant. Meanwhile Jared flirts with Ashley and offers her a massage whenever she needs one. He also tells her that everyone is wondering when they will climb into bed together.

When the chefs come downstairs the next morning Chef Ramsey greets them in French. He tells them that the days challenge will force them all to communicate with each other. The chefs have to read recipes written on the back of their chefs jackets and relay the instructions to each other. Jackie is excited when she realizes that she is going to make eggplant Parmesean. Vanessa is making a Steak and Cheese but does not realize that her gas is off until Chef Ramsey informs her.

Kristen and Hassan were the first two to have their dishes judged and Chef seemed very confused as he looked at Christine’s dish. When he asked who read the recipe off the back of her jacket Meese stepped up and admitted that she had. Chef tells them that it looks disgusting and refuses to even try it. The men get the first point. Next up are Ashley and Frank with burgers.

The women tied the competition with Ashley’s burger. Next up are Manda and Eddie who made Taquitos. The men take the lead. Then Meese and Alan with fish sandwiches which allow the ladies to tie the score. The cheesecake battle goes to the men while the spaghetti carbenera is a tie. In a battle of the fish the men win and they win the competition 5-3.

The men win a wonderful trip to Santa Barbara where they will get a mythology lesson while the women will be cleaning and scaling 100 pounds of fish for the table side appetizer the next night. The men are super excited about their reward and enjoy a wonderful day at the spa.

The women are stuck back in the restaurant cleaning and gutting the fish. When it comes time for lunch they are served fish head soup. Jackie seems to take it all in stride while the other women are thoroughly disgusted. The women continued to complain their way through the punishment and tempers continued to rise.

Jackie continues to get on everyone’s nerves as the prep for dinner service continues. The men say they want to break the curse and win both service and challenge. Chef tells everyone that Buzz Aldrin is there and that because the men won the challenge they will be the ones serving him.

When the chef calls out the first order of appetizers in the red kitchen Vanessa’s confusion becomes evident when chef asks her to repeat the order he’s just called out and she can’t do it. The men get out to a great start on appetizers thanks to Jared and Hassan. Meanwhile Vanessa holds up the red kitchen when she forgets to put on the second lobster tail, but they are able to quickly make it up.

Now Kristen makes the same mistake Vanessa did with the first main courses to go out when Chef tells her to call back the order and she is unable to repeat it back to him. Chef Ramsey is getting frustrated and says that he has had enough. Kristen apologizes. Chef has Christina write the ticket on Kristen’s back so that the other chefs can read it back to her and makes her recite it again.

In the red kitchen there is a steady push of food until Manda messes up and drives the kitchen to a halt with her meat. In the blue kitchen the men are cooking meat that are already cooked. In the red kitchen Meese and Jackie are being held up by Manda’s garnish. Chef finds out that Meese has thrown away perfectly cooked wellingtons and he tears into the red team for putting more food into the garbage than the dining room.

The men are moving things along in their kitchen and food is quickly delivered to the VIP table. Buzz Aldrin compliments the tuna saying that “It is the best I have ever tasted.”

Meanwhile Jackie is still having trouble with the Artic Char. She serves undercooked and cold fish at the pass and chef Ramsey is not happy. Chef tells her one more time to get it together. After another cold and raw piece of Arctic Char Chef loses it and throws the entire red team out of the kitchen. He then calls the blue team over into the red kitchen to finish their service.

Chef tells the red team that they have to nominate two people for nominations. When the team gets back upstairs the debate is heated. There is lots of arguing but finally the team comes to the a consensus. The first nominee is Meese because she threw away the wellingtons when they were perfectly good. The second nominee was Vanessa. The team wanted to nominate Manda, but Ariel stepped out on her own and called out Vanessa’s name. In the end Chef Ramsey eliminated Vanessa.