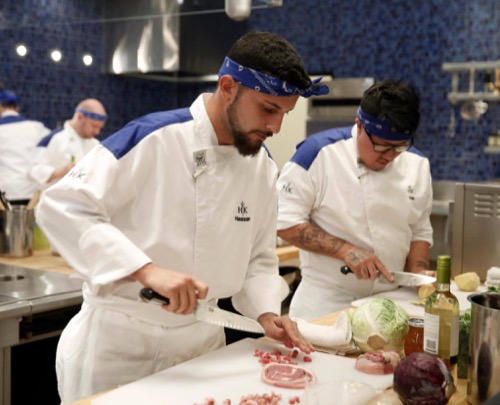 On the last episode, after an unexpected elimination for the red team, Chef Ramsay started at the quack of dawn, as he challenged contestants to a rubber duck hunt to determine what ingredients they would use with duck in the next team challenge. With the help of special guest judge Chef Josiah Citron, Chef Ramsay would decide which team had the best duck dishes. Did you watch the last episode? If you missed it, we have a full and detailed recap right here for you.

On tonight’s episode as per the NBC synopsis, “after the red team gains a member from the blue team, Chef Ramsay introduces the contestants to a celebratory challenge as he tasks them to work in pairs to create three main dishes each with a different holiday theme: 4th of July, Cinco de Mayo and Mardi Gras.

The team that completes the most dishes successfully wins. With the help of special guest Linda Fears, editor-in-chief of Family Circle magazine, Chef Ramsay will choose who will win and be flown to Santa Inez Valley to blend their own wine and who will face a not-so-sweet dinner service preparation. Later during the dinner service, tempers flare during family night.”

This week on Hells Kitchen after the elimination there is a confrontation between Manda and Jackie. Hassan rallies the women by telling that they “didn’t come here to argue every day they came here to cook their hearts out.

When the men and women get downstairs Chef Ramsey has a band playing Yankee Doodle. Chef tells them that for the challenge the teams will create platters of foods representing the 4th of July, Cinco De Mayo and Mardi Gras. Each platter will consist of three dishes. Hassan steps up to lead the team and get them working together, but there is tension between the team and Jackie as no one wants to be paired up with her.

To judge the challenge Chef Ramsey brings in Family Circle editor Linda Fears. First up are Kristen and Jackie. They only manage to score one point with their 4th of July platter. Next up is Joe and Frank for the blue team. They manage to score two out of three points. Hassan, Manda and Dani are up next with the Cinco De Mayo platter. Hassan and Dani score with their dishes while Manda does not. The blue team scores 2 out of 3 points with their Cinco De Mayo platter.

Ariel and Ashley score two out of three points with their Mardi Gras platter putting the women in the lead 5 to 4. After the blue teams first two dishes fail to score, including Chad serving undercooked chicken the women are still leading with one dish left to go. Keevin’s jumbalaya fails to score and the red team wins the challenge. The best platter that was chosen to appear in Family Circle was Ashley and Ariel’s Mardi Gras platter.

The red team heads off to a wine blending lesson In the Santa Barbara wine country while the blue team is going to be making candy all day. The red team is very excited about their reward, except for Jackie who says that “She is not a wine kind of girl.” There is tension even on the reward for the red team as Hassan tries to take the lead. Dani is still upset about Hassan stepping up and leading the red team. Hassan tells her that “if she doesn’t check her ego then the whole team will fail.” Dani tells him to “check himself and the argument gets even more heated.

The teams prepare for dinner service and Hassan has the women practicing communication while the blue team seems to be falling apart. Alan and Jared get into an altercation and the name calling begins.
Hells Kitchen is open for family night adding Fish and Chips and Burgers for the children. The blue team gets off to a rocky start as Kevin drops the scallops too early. In the red kitchen there is a cohesiveness that helps them get off to a quick start.

The blue team is held back by Kevin’s undercooked scallops so their first ticket is delayed. Joe sets the pans on fire in the kitchen and Chef tells him that he has “nearly made Hells Kitchen history.” The red team is doing beautifully as Jackie entertains the young diners while making Grilled Cheese. The blue team continues to struggle and chef pulls them all into the pantry. He tells Kevin to take his apron off, pack his stuff and get out of Hells Kitchen. Then he turns to the rest of the team and asks “who’s next?” When no one speaks Chef tells them to “get their act together.

Marino brings the red team the ticket for his family out in the dining room. Hassan continues to help the red team while Dani falters by not bringing two portions of tuna. Alan struggles to make risotto and it comes back as being soupy. When he tries to fix it he adds to much cheese and the risotto is too hard to eat.

In the red kitchen Dani’s tuna is overcooked and Chef tells them that he wants it in under five minutes. Alan finally gets the risotto right and Chef waits for an order of Fish N Chips. When it is delivered it is raw which only adds to Chef Ramsey’s frustration. Cheif Ramsey throws the entire blue team out of the kitchen.

In the red kitchen Dani’s third attempt at tuna is raw. Chef also throws the red team out of the kitchen. The blue team is frustrated and they are discussing how dinner service could’ve gone so badly. The team wants to send Joe and Alan up for elimination.

The red team is struggling with their own nominations. Hassan wants to nominate Dani because her tuna messed them up. Dani doesn’t think it’s fair and she wants to nominate Manda. Jackie’s name is also thrown into the mix.

When the teams get downstairs they nominate Alan and Joe. When they step forward Joe says that “He is constantly learning and growing.” Alan says that despite his awful Risotto he “felt like he had a voice tonight.” In the end Chef decides to send home Alan. Chef tells them that he is not done. He says that “Kevin and Alan are gone.” and he is not done. He tells them that he is not done yet. He asks the red team if they have reached a decision. The red team tells him that they didn’t vote, but in the end Manda and Kristen are sent up for nomination. Manda tells Chef that she is a natural leader and a team player. In the end Chef sends Manda over to the blue team.