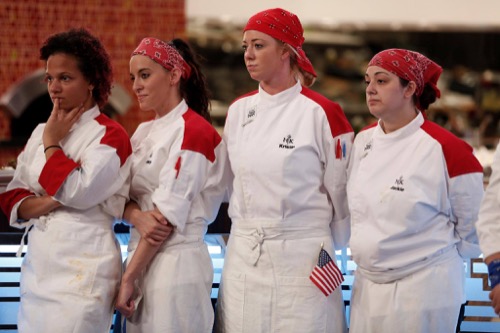 Tonight on NBC world renowned chef Gordon Ramsay’s television series Hell’s Kitchen where aspiring chefs compete returns with an all new Wednesday February 17, season 15 episode 6 called, “12 Chefs Compete,” and we have your weekly recap below. On tonight’s episode, a new member joins the Blue Team before a grocery spelling challenge, after which the winners go flying in a stunt plane, while the losers make sangria.

On the last episode, after the red team gained a member from the blue team, Chef Ramsay introduced the contestants to a celebratory challenge as he tasked them to work in pairs to create three main dishes each with a different holiday theme: 4th of July, Cinco de Mayo and Mardi Gras. The team that completed the most dishes successfully wins. Did you watch the last episode? If you missed it, we have a full and detailed recap right here for you.

On tonight’s episode as per the NBC synopsis, “after the most intense and disappointing dinner service yet, the blue team welcomes a new member and Chef Ramsay invites the contestants to participate in a grocery spelling challenge. Using grocery carts, contestants will have to spell out the words of each ingredient they wish to use during the next team cooking challenge.

Then, the team that creates the best dishes from the chosen ingredients will win the challenge and spend the day flying in a stunt plane, while the losing team will stay behind and prepare Sangria for the next dinner service. Later, when VIP guests Thomas Ian Nicholas (“American Pie”) and Omar Benson Miller (“CSI: Miami”) enter the dining room, teams will fall apart, but individuals will rise to power.”

This week on Hells Kitchen Jackie is really upset about the fact that Ashley called her out for elimination Jackie and Ashley have an argument and Jackie tells her that she should “break her face.” Ashley tells Jackie to shut up. After the fight Ashley is upset and feels that no one should be talked to that way.

In the first part of the challenge the chefs are brought to a supermarket and told that they must work as a team to spell out the six ingredients that each chef will use in their individual dishes. The ladies have trouble finding the letters that they need in order to get the ingrediants that they want while the men are going about the challenge easily. When the challenge is over the chefs are given sixty seconds to go into the grocery store and get one ingredient to help elevate their dish.

In the second part of the challenge the teams cook their individual dishes and chef tells them that they will be scored on a scale of one to five. The blue team is up first and Chad’s salmon only manages to score three points because the rice is undercooked. Up next is Eddie and he scores four points. Next is frank and while his fish is beautiful other issues drive the score down to a three. Franks scores three points. Manda is up next and scores four points. Joe’s dish scores five out of five points to give the blue team 22 out of thirty points.

Up first for the red team is Jackie and Chef criticizes Jackie plating and says that “It looks like a dog has chewed on it.” He also asks her where the other piece of Halibut is. Jackie tells him that she cut the end off because it was too big. She only scores 2 0ut of five, Ariel scores 5 out of 5 . Up next is Hassan who scored three out of five. Kristen scores four out of five. Ashley is the last to go and she scores a perfect 5 out of 5 to tie the score at 22. Chef decides to bring up the two highest scoring dishes, one from the red and one from the blue. Those dishes belong to Joe and Ashley. Ashley wins the challenge for the red team.

The reward for the red team is that they get to go up in a stunt plane while the blue team is stuck in Hells Kitchen preparing ingredients to make Sangria which will be served at dinner service.

While the red team has a blast on their reward the blue team is miserable. Joe starts to act out and his behavior starts to get on his teammates nerves. When the red team gets back both teams are prepping the kitchens for dinner service. Jackie and Ariel get into a confrontation in the red kitchen and Ariel tells her that she is getting on her nerves.

Joe is having issues with the tableside appetizers. He is moving really slow and Chef calls him back to the kitchen. When he sees the state of Joe’s clothing he tells him he is “dirty and slow” and throws him out of the kitchen. He sends Joe to change his jacket.

Meanwhile the red team is moving on to entrees. Jackie is having issues with communicating with her team. When Dani brings her steak up it is well done rather than medium well. Dani blames Jackie because she held up the meat with her garnish.

In the blue kitchen the men have overcooked the Artic Char and the New York strip. Eddie has slowed up the blue team on garnish. Jackie is struggling on garnish so Kristen goes over to help her so that the red team can keep service moving. Chef is not impressed and he gets angry when the garnish isn’t right. The blue team manages to redeem themselves and get their kitchen back on track. The blue team is held up once again when the chicken is brought to the pass raw. Chef makes them sit in the booth and asks the blue team “who wants to eat raw chicken?” The blue team says no one. Meanwhile the diners are getting frustrated. Chef tells Chad that “if he needs one more minute on the chicken he needs to communicate that.” The teams continue to push out the last of the entrees for dinner service and manage to complete it.

When Chef asks Ariel for her two nominees she tells him Jackie because of her attitude and Kristen because she made a bigger mess at the garnish station.” Jared announces that Eddie and Joe are the blue teams nominees. He nominated Joe because he was dirty and Eddie because he served raw chicken. Chef tells Joe and Kristen to get back in line leaving Eddie and Jackie. In the end Chef Ramsey decided to send Eddie home.