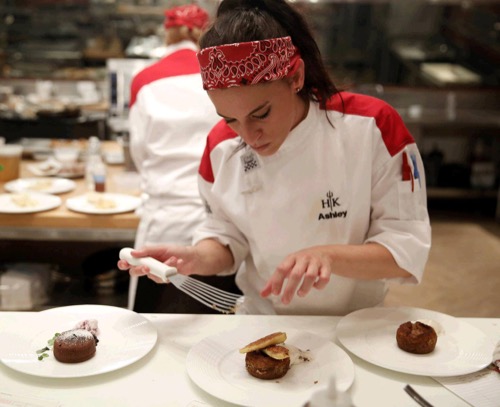 Tonight on NBC world renowned chef Gordon Ramsay’s television series Hell’s Kitchen where aspiring chefs compete returns with an all new Wednesday February 24, season 15 episode 7 called, “11 Chefs Compete,” and we have your weekly recap below. On tonight’s episode, the 11 remaining chefs come up with unique dishes for Andi Van Willigan’s wedding reception, which they will cater.

On the last episode, after the most intense and disappointing dinner service yet, the blue team welcomed a new member and Chef Ramsay invited the contestants to participate in a grocery spelling challenge. Using grocery carts, contestants had to spell out the words of each ingredient they wish to use during the next team cooking challenge.  Did you watch the last episode? If you missed it, we have a full and detailed recap right here for you.

On tonight’s episode as per the NBC synopsis, “love is in the air when Chef Ramsay invites special guest and former HELL’S KITCHEN sous chef Andi into the kitchen for the next team challenge. Both teams will be tasked with creating six unique dishes for Andi’s wedding reception, which will be in place of the next dinner service.

The winning team will be flown to Las Vegas for a gravity-defying zip line experience and an evening in a grand suite at the world famous Caesars Palace. Meanwhile, the losing team will have to prepare a mountain of macarons for the wedding reception. Later during the wedding reception dinner service, teams must come together to deliver a dinner service for the newlywed couple’s family and friends that Andi and her husband will never forget. Find out which wedding crasher contestant is sent home and who will move on.”

This week on Hells Kitchen Jackie is elated to still be there. The chefs unwind and drink into the night. Ariel injures her ankle and decides to rest and continue on in the competition. She says “quitting is not an option.

When the chefs head downstairs the next day the dining room is decked out for a wedding reception. The chefs find out that they will be preparing dishes for Sous Chef Andi’s wedding. Chef Ramsey tells them that they are going to making six dishes two seafood, two chicken and two beef. Chef breaks tradition and tells the teams what the reward is before they complete the challenge. He tells them that the winning team will be heading to Las Vegas for a 24 hour trip. The chefs work feverishly to get their dishes ready.

When the blue team counts up their dishes they realize they have seven dishes. When they go back and look they see that they have three beef dishes. The judging begins with Ariel’s seafood appetizer. Andi and Chef are not very happy with Ariel’s dish. Kristen fairs much better. For the men Chad and Joe manage to impress with their dishes and Andi and Frank select the blue teams appetizers. Next up are the chicken entrees.

Dani takes the point for the red team. Andi calls Frank’s dish “hospital food.” Andi really likes Ashley’s chicken. They are also pleased with Joe’s dish and Joe wins it for the blue team sending them to Vegas. Chef tells them that they will be zip lining through the sky in Vegas. Before they leave there is a fight between Frank and Manda over the fact that he chose to leave her dish out.

The red team is stuck in Hell’s Kitchen assisting the wedding coordinator and making a difficult Macaroni and Cheese dish. Meanwhile the blue team is having a blast in Vegas. Joe confronts his fear of heights and manages to conquer it on the zip line.

The wedding planner is working the red team hard, but Haasan is fascinated by her. Ariel’s foot is giving her bigger issues and when she removes her shoes her ankle has swollen to twice its size. She decides to go and get it X-Rayed. Jackie tells her “If it’s broken they are going to put you in a cast and that will be it for her in the competition.”

Ariel heads off to urgent care to get her foot checked out. Meanwhile the blue team is impressed with their suite in Vegas. Back in Hell’s Kitchen the ladies are still working on the Macaroons when Ariel returns. She is carrying crutches and when Jackie asks her why she is carrying crutches instead of walking on them Ariel tells them that “I don’t need crutches.” When chef notices the boot on Ariel’s foot she tells him that she has broken a bone in her foot.

When dinner service starts Hassan is still fixated on the wedding planner. The red team starts off with issues as Jackie has issues with the Risotto. Over in the blue kitchen Chef is equally frustrated with Joe. He holds up the first tables appetizers with overcooked scallops. Both teams soon get it together and begin getting appetizers out to the guests.

Chef realizes that Dani is not using a nonstick pan and ruins the scallops. He tells her “There is a reason that I spend thousands of dollars on non stick pans.” Chef Ramsey steps in and makes the scallops himself. Chef tells each team that they have five minutes to get the entrees ready. There are issues in the red kitchen with Hassan as he struggles with the chicken entrée. In the blue kitchen Jared undercooks the chicken.. It seems that Hassan can’t get it right either as he puts up raw chicken. Jared takes his second attempt at the chicken to the pass and chef decides to serve half of the head table.

Hassan fails again at making chicken as once again he brings raw chicken to the pass. Chef’s anger goes into overdrive and the red team gets pulled into the pantry. Ariel takes charge and they finally manage to serve the other half of the Head Table. The blue team struggles to get their last entrée out, but he finally manages to get it right and both teams work to serve the last tables.

When service is over Chef tells them that “This was a special service for a loyal friend and I couldn’t even look her in the eyes.” The women are debating on who to eliminate and Hassam’s name comes up. He gets angry and says “he’s not going home tonight, next week or anytime soon. The blue teams debate is heated as well.

When the teams come back Chef asks Kristen who the team nominees are. She tells him Hassam because of the chicken and Dani because she ruined so many scallops. Chef asks who the blue team nominated. Chad is their first nominee because of his mistakes on Salmon and the second nominee is Jared. Hassam says that “He is clearly a better chef than Dannie.” This angers Dannie and she tells Chef that Hassam is not a better chef than her. In the end Chef Ramsey decides that Hassam was done and eliminated.