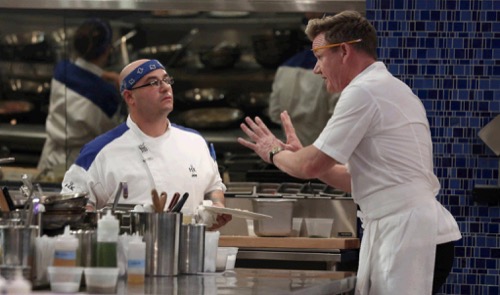 On the last episode, love was in the air when Chef Ramsay invites special guest and former HELL’S KITCHEN sous chef Andi into the kitchen for the next team challenge. Both teams were tasked with creating six unique dishes for Andi’s wedding reception, which would be in place of the next dinner service. Did you watch the last episode? If you missed it, we have a full and detailed recap right here for you.

On tonight’s episode as per the NBC synopsis, “Chef Ramsay surprises the contestants with a rockin’ performance from Grammy Award-winning guitarist Steve Vai, to illustrate the similarities between musicians and cooks in their ability to make magic with just one instrument. For this week’s team challenge, the contestants are tasked with creating five unique dishes, each only containing 7, 6, 5, 4 or 3 ingredients.

The winning team is rewarded with a friendly game of paintball, while the losing team must stay behind to participate in a grueling delivery day at HELL’S KITCHEN. Later, actor Jonathon Lougram (“Grown Up”) and actress/TV host Garcelle Beauvais will make celebrity guest appearances at the dinner service prepared by the two teams. Tune in to see which contestants give award-winning performances and whose communication skills fall flat.”

This week on Hell’s Kitchen after elimination the teams are both frustrated. Kristen says that “In order for the red team to get a desperately needed win Danni needs to be a bit more humble.” Manda talks about how the fact that she used to be a dancer had made her super strong. Manda shows off her skills by grinding on Danni and Chad laughs. Frank says “Manda is desperate for attention.”

When the chefs get downstairs the next day there is a live band playing. They are all very excited to see Steve Vai who is a three time grammy winner. In this weeks challenge the teams must produce five stunning dishes. One with seven, one with six, one with five, one with four and one with just ingredients. The blue team quickly gets the list together of who is cooking with how many ingredients and quickly get to work. Meanwhile the red team struggles to decide who will cook with how many ingredients. Chad ignores Jared’s advice about washing one of the ingredients. Meanwhile Jackie seems to fall apart under the pressure.

The judging starts of with Kristen vs Manda on Sea Bass. Manda wins the first point over Kristen. Next is Frank and Ariel with Flank Steak. Chef is sorely disappointed with Franks dish. While Ariel impresses with her steak and wins the point for the red team. Next up is the battle of the lobster. Joe’s dish seems to be an epic fail when chef can’t even find the lobster, which is supposed to the central ingredient, on the plate. When chef asks Joe where the lobster is he tells chef that he ate the Lobster. Jackie made a lobster tail that impressed chef and scored another point for the red team putting them in the lead. Next up is the tuna. Chef is impressed with Ashley’s tuna Chad’s dish failed because it was encased with black garlic and Ashley scores the point winning the challenge for the red team. The red team heads off for a surprise while the blue team is stuck at Hell’s Kitchen on delivery day. The first delivery to arrive is the ice.

The red team heads off to play paint ball with Marino. Jackie is determined to get some aggression out on her teammates. The red team has a blast. Meanwhile back in Hells Kitchen the blue team continues to suffer the punishment. Manda hurts her back and heads up to the dorm. The men are angry and looking for her. They think she is slacking off while they are working. Meanwhile Manda is afraid that she has seriously injured herself.

When the red team gets back they quickly get ready for dinner service. The teams line up and Chef tells them that he feels this will be their come back service. He tells them to “Repeat after me, I will not suck.” He then has them turn to each other and repeat it. Trouble start early in the blue kitchen as Jared messes up the first order of scallops, but they manage to pull it together and get them out. In the red kitchen there are also issues as Danni is feeling uncomfortable on her station. Communication is good for the red kitchen as Kristen takes the lead.

Back in the blue kitchen Jared has returned. Manda tells Jared “I can’t move fast.” Jared asks her what she means and she tells him that she just needs extra time. This is frustrating to Jared. Manda’s slow movement has backed up the orders in the blue kitchen. Chef calls the blue team to the pass. He tells them to “Get it together.” Meanwhile the red team has finished serving their appetizers and have moved on to entrees. Ariel tells Danni to “Cut the chicken breasts and see if they are ready.” Danni decides to simply touch them to try and determine. Ariel gets frustrated.

In the blue kitchen Manda delivers her chicken but a non communication between Jared and Chad has chef pulling them aside and has them work on their communication skills. Ariel and Jackie are having communication issues. Jackie has backed up the kitchen with her lapse on garnish. Chef tells them that “The kitchen should never wait on garnish.”

In the blue kitchen Manda is once again slow on the chicken. When chef asks her how long she will need on chicken she tells him “Five or six minutes. This does not make Chef Ramsey happy. He pulls Manda into the pantry and tells her “You are not communicating. I think you are in over your head and should take your apron off and go home.” Manda tells Chef ” I don’t want to go home and I know I can do this.” Chef Ramsey tells her that she has ten minutes to prove herself or he will personally ask her to go home. Manda goes back out there and pulls herself together and quickly gets food out.

In the dorm argument ensues. The team wants to nominate Manda and Frank. Chad says ” I am not going to play the pity game with Manda.” Manda gets upset and tells them “By no means will this team be better without me on it.” The debate rages on as the blue team struggles to come to a decision. When the blue team comes downstairs Chef asks Frank for the blue teams nominees. The team nominates Manda and Jared both because they could not communicate. Manda says that she is there for her kids and to give them a better life. Jared says that he is there to be the best chef he can be. Chef Ramsey makes a shocking decision and calls Chad forward. He tells him that he has lost his confidence and sends him over to the red team and sends Danni over to the blue team. He tells both Manda and Jared to get back in line.