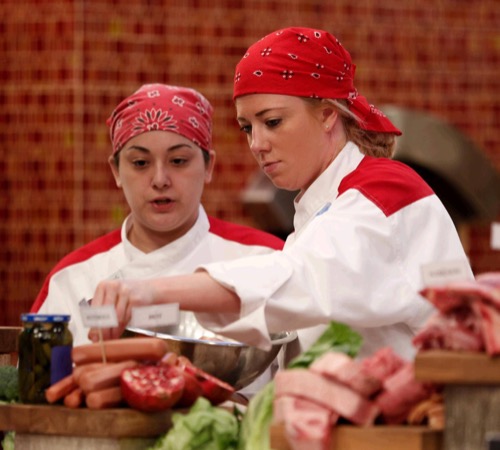 On the last episode, after last week’s shocking elimination, Chef Ramsay invited the contestants to participate in a breakfast challenge. Divided into four categories, both teams had to make a vegetarian, meat, seafood and sweet dish for their surprise judges: Suzanne Tracht, executive chef and owner of Jar; and David Lefevre, executive chef and owner of M.B. Post.  Did you watch the last episode? If you missed it, we have a full and detailed recap right here for you.

On tonight’s episode as per the NBC synopsis, “Chef Ramsay wastes no time, quickly throwing the remaining chefs into a challenge that will be a test of teamwork, creativity and communication. Each team will be responsible for preparing three entrees, each using a different protein. But, there’s a catch: only one chef from each team will be allowed in the kitchen at a time.

The winning team will enjoy a VIP day at the Santa Anita horse racetrack, while the losing team will be left behind to unload 100 pounds of lamb, in preparation for their upcoming dinner service. Later that night, during one of the most successful dinner services with VIP dining guests, actress Lainie Kazan (“My Big Fat Greek Wedding”) and comedian Bill Engvall, the first team to finish their last plate will win. In a race to the finish line.”

This week on Hell’s Kitchen after elimination Frank is really upset that the entire blue team wanted to send him home. Jackie and Ashley are having a conversation and Jackie tells her “I am every lesbian’s dream.” Ashley tells her “You’re not my type and I don’t want you.” Jackie gets angry and says “I am really offended. How could you want to sleep with Jared and not me?”

When the chefs get downstairs they are told that they will be cooking with Sea Bass, rack of Lamb and chicken. They have to choose five ingredients for each protein. Chef tells them that they have forty minutes to complete the proteins, but that there will only be one chef in the kitchen at a time. After a five minute shift they will switch and someone else will take their place. First up are Jared and Jackie. When the first switch happens it is Ashley and Frank who replace Jackie and Jared. Next up are Danni and Ariel. Next switch is Manda and Kristen. Now we are back to the first two with Jackie and Jared. Ashley and Frank take their second turn in the kitchen Dannie and Ariel are now up for their final turn in the kitchen. Finally Kristen and Manda take their final turn in the kitchen to complete and plate the dishes.

The first dishes the Chef wants to taste are the Sea Bass. He is very impressed with the Red teams dish as well as the blue team and both teams earn a point. Red team takes the lead with the lamb dish. Chef is impressed with the Blue teams chicken and although he also enjoys the red teams dish he gives the point to the blue team because the carrots on the red dish were raw. In the end the blue team won the challenge with their Sea Bass dish. The blue teams reward is to go out and gamble for the day at the racetrack. Meanwhile the red team is stuck preparing the lamb for that nights dinner service. The blue team is excited and happy to be out at the track relaxing. However Frank is still steaming about the fact that the blue team put him up for elimination last week.

Meanwhile back in Hells Kitchen Jackie is a bit out of control while cutting the lamb and Kristen says “We shouldn’t keep putting weapons in Jackie’s hands.” That night at service the red team does a mock service to help with their communication skills. During prep a fight breaks out between Kristen and Ariel and Sous Chef Christina calls them into the pantry and tells them “Before your fight spreads to the rest of the kitchen I am going to lock you in here so you can work it out.” She then slams the pantry door and walks away while the rest of the red kitchen looks on in stunned silence.

While they are in the pantry Ariel asks Kristen what the issue is and Kristen tells her that the fact that her steak was undercooked and she lied to chef was what was bothering her.. Ariel tells her to deal with it and Kristen says “I’m tired of being diplomatic when Ariel is being so mean.” Meanwhile in the blue kitchen Frank’s attitude has become palpable to the other chefs and Chef Christina as well. She asks him what the problem is and he tells her “It is personal and I am upset that they put me on the block.” Chef Christina tells him “There are people gunning for my job every day. I know it. Instead of sweating it I do my job and I do it well.”

As service starts there are already problems in both kitchens as the red teams first order of risottos are too soupy and Frank is refusing to communicate in the blue kitchen. Despite the lack of communication they manage to get their appetizers out. In the red kitchen Ashley has managed to once again screw up the Risotto. Chef Ramsey pulls her aside and asks her if she is ok. Ashley apologizes, but this is not good enough for Chef Ramsey. Ashley starts to cry and Chef tells her “I want a Risotto and I want it quick.”

With the help of her teammates their appetizers finally leave the kitchen. Ariel says “Kristen and I don’t get along, but when it comes time for service we are always working together. Sometimes you work better with someone you hate.” Chef calls both teams over and tells them “This has been the best service so far. Keep it up.” This compliment seems to drive both teams to finish service strong. Both teams are communicating well and trying to get their last tables out quickly before the other can finish. Chef gives them extra incentive by telling them “First team to finish wins.” The red team was moving along and set to win until Jackie’s lamb was raw at the pass, giving the blue team the win. Ashley was crying in the kitchen and Chef Ramsey asks her “What’s wrong?” She tells him “I’m better than that and I know I am. “ Chef tells her “You may have had ackward night, but go upstairs, get strong and vocal.”

Upstairs the debate is heated as Jackie, Kristen and Ariel all fight for their spots. Ariel announces that their first nominee is Ashley because of her lack of communication. When it comes time to name the second nominee Ariel stumbles. Chef tells her “Name, it’s one word.” Ariel finally says Jackie’s name. Chef asks why and Ariel says that Jackie’s focus was too much on winning and not enough on getting the food prepared properly. Ashley says that “This is what I want to do and I run a restaurant back home.” Chef tells her “Running a restaurant for your parents doesn’t mean that you are ready to run a large restaurant.” In the end Chef Ramsey decides to send home Jackie. The red team is happy that Jackie is gone.