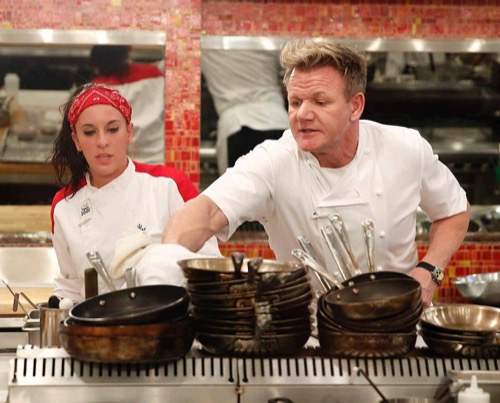 Tonight on NBC world renowned chef Gordon Ramsay’s television series Hell’s Kitchen where aspiring chefs compete returns with an all new Wednesday March 16, season 15 episode 10 called, “9 Chefs Compete,” and we have your weekly recap below. On tonight’s episode, the nine remaining chefs take part in a breakfast challenge, during which their teams must make a vegetarian, meat, seafood and sweet dish for surprise judges Suzanne Tracht and David LeFevre.

On the last episode, after two contestants swapped teams, Chef Ramsay startled the cooks by inviting a furry friend to the dining room – Jack, a 12-year-old American bison. The contestants aimed to please as they went head to head in a bison dish challenge, during which their archery skills ultimately determined which country’s cuisine their dish will represent. Did you watch the last episode? If you missed it, we have a full and detailed recap right here for you.

On tonight’s episode as per the NBC synopsis, “after last week’s shocking elimination, Chef Ramsay invites the contestants to participate in a breakfast challenge. Divided into four categories, both teams must make a vegetarian, meat, seafood and sweet dish for their surprise judges: Suzanne Tracht, executive chef and owner of Jar; and David Lefevre, executive chef and owner of M.B. Post.

The winning team will enjoy a private plane to Palm Springs, where they will ride their own all-terrain vehicles, while the losing team must clean both kitchens and hand squeeze crates of oranges for a special brunch for local chefs and their families. Tempers will rise when Flo Rida and Jeff Dunham enter the dining room and after a brutal brunch scene, contestants are left shocked and disappointed.”

This week on Hells Kitchen the blue team is blown away by the fact that Joe was sent home even though the blue team won. Jackie asks Kristen “How does it feel to have someone who has only been cooking three months be on the same level as you?” Kristen tells her she has only been cooking three months and doesn’t know what you are doing. Jackie says “I am one of the strongest members of the red team.” Then she asks Kristen to give her a lighter and Kristen tells her to keep her hands off of her lighter. Jackie jumps up and tries to provoke Kristen to fight her and she pushes her. Kristen decides to walk away.

The next day the chefs head into the dining room. Chef tells them that breakfast is the most important meal of the day. He tells that they are going to make four dishes : meat, seafood, vegetarian and sweet. He also tells the red team that since they have five members they will have two people double up on one dish.

The teams head off to work in the kitchen and Manda imeadiately has an issue becaucse she can’t taste her dish. Jackie is struggling with her dish. Jared has issues with frying the eggs for his dish when they break. Frank asks if Jared is ok, and then asks Manda to step up and help him. She tells him “I can in a minute.” Jared decides to discard the eggs and as time winds down he drizzles his sauce over the meat. The red team has to drop one dish and after much discussion they decide to drop Jackie’s.

Chef Ramsey is joined by David Lafavre and Jackie Track. The battle starts off with the sweet dishes. Ashley makes a French toast bread pudding. The chefs are impressed and she earns 9 points. Manda’s French toast is a bomb and she only gets 3 stars. Dani and chad are up next Chad only scores three points. Next up is the meat. Kristen prepares meat, grits and eggs and scores 8 points. Frank also manages to score 8 points with his dish as well. Jackie presents her eggs benedict. The chefs like the look, but the flavor is not there and she only scores 3 points. Jared’s dish is well received by the chefs and he scores nine points allowing the blue team to win.

Chef tells them that they will be doing a special brunch for talented chefs and their families. The blue team gets to go to Palm Springs on their own private jet. The red team will be cleaning up the kitchens and then preparing Mimosas.

When the blue team gets to the airport they are excited to be on the private plane. When they get to Palm Springs they go for a ride on dirt bikes in the dessert. Meanwhile the red team is dealing with their punishment. Jackie pulls Christina aside and asks her if she thinks she is in the competition too soon because she has only been cooking for three months. She also asks her what she can do to get better. Christina tells her “If you don’t know ask. If you need help rely on your teammates and most importantly drop the attitude because the people on your team will be a lot more likely to help you if you don’t talk to them badly.” Jackie agrees and says she will “try to change her attitude.”

The next morning both teams are up early to prepare for the brunch for the local chefs and their families. Chef tells them that there will also be a couple VIP’s. In the red kitchen will be Flo Rida and in the blue kitchen will be Jeff Dunham. In the red kitchen Jackie is imeadiately having issues with communication. When the chicken comes out of the kitchen it is overdone and Ariel tells her “If you send that up Chef will have a fit.” In the blue kitchen Jeff Dunham and walter are already creating a little funny chaos. When the order comes up to the pass it’s raw. Chef immediately calls them into the pantry. He tells Jared to get it together.

Meanwhile in the red kitchen Jackie manages to correct her mistake and send out a perfect order of chicken to the Flo Rida. Ariel messes up , forgetting to put an egg on the salad. In the blue kitchen they are still struggling to get the order of chicken and waffles right. Once again the chicken is raw and Chef decides to throw Jared out of the kitchen after telling them “I can’t accept this any longer.” Jared is upset and says “Frank should be kicked out too. I’m taking all the heat for the chicken.” The blue team finally manages to get the Chef’s table order out. Walter says “I feel sorry for those people.”

In the red kitchen Ariel is trying to help Chad. When he brings it up to the pass it’s raw and Chef Ramsey throws Chad out of the kitchen. As service continues Dannie becomes more vocal and steps up to lead the blue kitchen. When they bring the order to the pass the French toast is burned. When Chef asked who cooked it Manda says “I was supposed to watch it.” Chef tells Manda to “Get out.” When she gets upstairs she and Jared have a confrontation and Manda tells him “I have been refiring eggs all night long and my eggs have been perfect.” Jared says “Whatever go make another one.” Manda responds with “Go make another egg and wait for Jared to get his stuff together.” Jared tells her “Whatever that was a low blow.”

The chefs are impatient and Chef Ramsey calls Kristen and Jackie over to the blue kitchen to help. The food finally leaves the kitchen and the diners are happy. When it comes time to announce the winning team Chef is angry and tells them “I don’t want to discuss a winning team, nor am I worried about nominations. I want an explanation.” The two teams head upstairs and the heated debate begins. Ariel and Chad are both sniping at each other and then Ariel brings Jackie into the mix. She says her food was perfect and she should not be put up.

On the blue side Manda is catching heat for the French toast, but Jared tells Frank “I was not exactly happy with the chicken either.” Frank gets angry and tells Jared “I am not the one who sent up raw chicken, you are.” Jared tells Frank “This is not the marines.” Frank says “Yes it is. This is a competition and if you don’t like how I am in the kitchen then leave.”

When the teams come back downstairs Chef asks Kristen to tell him what happened. She tells him that Jackie was not on point with her chicken. On the blue side all of the blame is placed on the shoulders of Jared and Manda. When a poll is taken on who should leave the blue team everyone votes for Frank. When the same question is asked of the red team they all say chad. Chef decides to eliminate Chad.