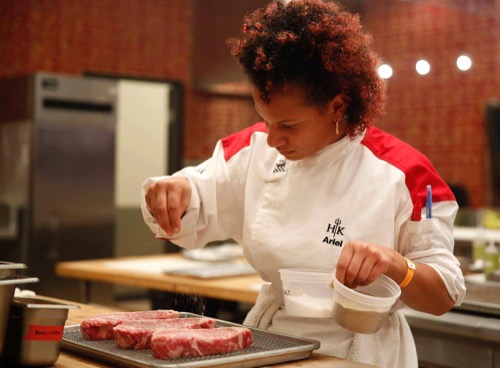 Tonight on NBC world renowned chef Gordon Ramsay’s television series Hell’s Kitchen where aspiring chefs compete returns with an all new Wednesday March 9, season 15 episode 9 called, “10 Chefs Again,” and we have your weekly recap below. On tonight’s episode, two contestants swap teams prior to a challenge that finds them cooking bison with international flair. Winners get to visit Hollywood animal actors, while the losing chefs bake bread and hand-churn butter.

On the last episode, Chef Ramsay surprised the contestants with a rockin’ performance from Grammy Award-winning guitarist Steve Vai, to illustrate the similarities between musicians and cooks in their ability to make magic with just one instrument. For this week’s team challenge, the contestants were tasked with creating five unique dishes, each only containing 7, 6, 5, 4 or 3 ingredients. Did you watch the last episode? If you missed it, we have a full and detailed recap right here for you.

On tonight’s episode as per the NBC synopsis, “after two contestants swap teams, Chef Ramsay startles the cooks by inviting a furry friend to the dining room – Jack, a 12-year-old American bison. The contestants will aim to please as they go head to head in a bison dish challenge, during which their archery skills ultimately determine which country’s cuisine their dish will represent.

The winning team will roar with an up close and personal trip visiting Hollywood animal actors, in addition to going home with a brand new Vitamix blender. Meanwhile, the losing team is left behind to make freshly baked bread and hand-churned butter, the old-fashioned way, in preparation for dinner service. Later that evening, it’s Cowboy Steak Night with VIP guests actress and Fox News contributor Stacy Dash and Olympic Gold Medalist Phil Dalhausser”

This week on Hells Kitchen Chad says “I did not expect my name to come up and for Chef to tell me to take my jacket off. I thought I was going home.” The ladies welcome Chad to the red team seemingly happy to be rid of Danni.

The chefs head downstairs and see a bison in the restaurant. Chef tells them that for the challenge they will each be cooking a cut of Bison. When the teams get outside they see tables set up with cuts of Bison and one blue tag and one red tag. After everyone has chosen their cut of meat Chef tells them that they will be shooting for the rest of their ingredients. There are seven flags representing ingredients from their country. The pairs will be shooting bows and arrows to determine who picks which countries ingredients they will be working with. Joe beats Jackie and chooses Spain. Ashley and Danni are next and Ashley wins. She chooses Asian food. Manda and Chad. Manda wins and chooses Italian ingredients. Next up are Ariel and Joe. Ariel wins and chooses Japanese ingredients. Frank and Kristen are last and chooses French ingredients. The chefs head back into the kitchen and start preparing their meals.

Chad and Manda start out the judging which will be head to head and the team with the most points wins. Chef is pleased with Chad’s flank steak with Italian ingredients.while Manda’s disappoints. The first point goes to the red team. Next up are Jared and Jackie with with ground Bison using Spanish ingredients. Jared impresses with his meatballs while Jackie’s fall short and the blue team gets the point. Kristin and Frank both score with their top Sirloin. Ariel and Joe are up next and once again both teams score a point. Danni and Ashley are up next and Danni impresses with her dish. Ashley makes Pare using the Bison. Chef asks her why and she tells him “I wanted to take a risk.” The final point goes to both of them. In order to break the tie chef decides to give it to the best dish and that dish belongs to Chad so the red team wins.

Chef tells them that as a reward they are going to meet some Hollywood actors. The chefs are very excited until they find out that they are meeting the animal actors from that movie. Chef tells the blue team that they will be baking bread and they have to grind the wheat themselves for Cowboy Steak night at Hells Kitchen. The blue team will also be cleaning up the Bison pee.

The red team heads off on their adventure and Ashley is super excited. Jackie is nervous about petting the tiger. Ariel tells her she needs to “chill out.” Back at Hells Kitchen the blue team is busy churning out wheat. Joe is frustrated and angry about the punishment. He breaks his churn and then a piece of the ceramic from the churn falls into the wheat.

When the red team gets back to the restaurant they jump straight into preparing the menu for Cowboy Steak Night. Chef lines the teams up. He tells them to “Show him that they belong at BLT Steak in Vegas.” Marino comes in dressed in cowboy gear and Chef tells him to open Hell’s Kitchen.

The red team gets Stacy Dash’s VIP ticket and Ariel and Chad knock the appetizers out of the box. In the blue kitchen Danni is off to a rough start as she lags a little behind but the blue team is able to get their first appetizers out as well. The red team has issues with their VIP appetizers and they end up being sent back. The blue team is steadily sending out apperizers. In the red kitchen Ariel’s second attempt at scallops are overcooked. When she refires them they end up sticking to the pan and chef gets angry and tells Ariel “That is it.”

Chef calls the red team over and tells them to “get on the fish station and help her out.” Jackie is able to get things sorted out and the appetizers go out. In the blue kitchen Frank and Danni are held up by Joe’s mashed potatoes, but the mistake is quickly corrected so that they get their tickets out. In the red kitchen there are problems with Jackie’s tuna. The red team are forced to start over. In the blue kitchen Joe is once again holding up the blue kitchen’s service. Chef tells Joe to “hurry up and get it together.” When Joe delivers his fries to the pass they are greasy and not drained.

Back in the red kitchen problems continue as the meat is once again raw. Chef tells them that he’s done and throws the entire red team out of the kitchen. In the blue kitchen everyone steps in to help Joe. With their help food finally leaves the blue kitchen. The blue team continues to work well and manage to complete dinner service. Back upstairs the red team is debating on who should be eliminated. The team wants to nominate Ashley because of her poor service. Ashley says that Jackie should be up for elimination .Jackie gets so upset and blurts out that she has only been cooking for three months. This upsets the rest of the team, who has been cooking for years and they feel as though she doesn’t deserve it.

When the red team goes downstairs Chef asks Jackie who the nominees are. Jackie tells him Ariel and herself. Ashley tells Chef Ramsey that they voted for Jackie because “They can’t keep carrying her through challenges.” Chef shocks everyone and eliminates Joe. He tells Ariel and Jackie to get back in line.