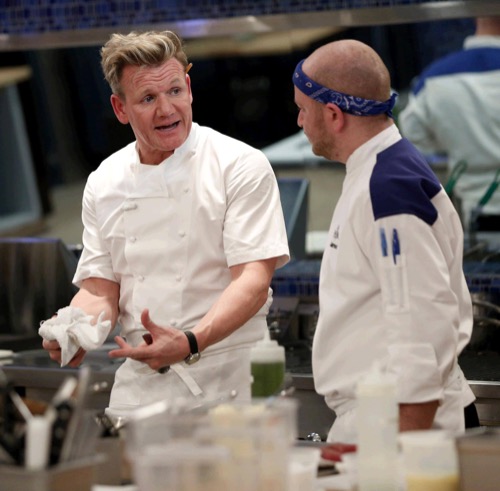 Tonight on NBC world renowned chef Gordon Ramsay’s television series Hell’s Kitchen where aspiring chefs compete returns with an all new Friday April 1, season 15 episode 12 called, “7 Chefs Compete,” and we have your weekly recap below. On tonight’s episode, the seven remaining chefs try to identify different ice cream flavors during a blind taste test; and the team that loses the challenge is punished with the task of preparing foul-smelling durian fruit.

On the last episode, Chef Ramsay wasted no time, quickly throwing the remaining chefs into a challenge that would be a test of teamwork, creativity and communication. Each team would responsible for preparing three entrees, each using a different protein. But, there’s a catch: only one chef from each team would be allowed in the kitchen at a time.  Did you watch the last episode? If you missed it, we have a full and detailed recap right here for you.

On tonight’s episode as per the NBC synopsis, “Chef Ramsay puts together a blind taste test challenge, in which each chef must identify different ice cream flavors. This time, the blame won’t just fall on the chef who guesses the wrong flavor. After three wrong guesses, a different team member will be blasted by a mysterious ice cream topping. The team that recognizes the most flavors will be rewarded with a shopping spree of a lifetime, $2,000 for each chef to spend at Roland Kitchenware.

Meanwhile, the losing team will have to suffer through breaking down and preparing hundreds of foul smelling durian fruits. Later that night, they’ll welcome special VIP guests, actress Meredith Baxter (“Family Ties”) and Olympic medalist and swimmer Haley Anderson. As the competition continues to heat up, only one team will rise above and push out its best dinner service yet, while the other team crumbles.”

This week on Hells Kitchen the teams head upstairs after elimination. Ashley is very upset and Ariel asks her “What are you crying for? You didn’t go home.” Ariel then questions Ashley’s ability to run a restaurant by saying “Ashley why aren’t you already an executive chef? Your parents own three restaurants and even named one of them after you.”

When the chefs head downs stairs they are greeted by Marino and an ice cream cart. Chef tells them that for the challenge they are doing the blind taste test using ice cream. He tells them that while they will be no dunk tank. However the teams are made aware that for every three flavors the teams get wrong a teammate will be pelted with ice cream toppings.

Ashley and Jared are up next. Ashley gets the first one right while Jared misses. They both miss the next two and get the last one correct. The red team now leads 5 to 2.

Up next are Kristen and Manda. Kristen and Manda both get the first two right and then Kristen guesses correct on the third one and Manda misses. On the final flavor Manda misses while Kristen gets it right scoring the win for the red team. However chef Ramsey decides to test both Ariel and Jared. Ariel gets the first one correct and Jared misses. They both miss the next two, but Ariel manages to get the last one correct.

Chef tells the red team that they are going on a 2,0000 shopping spree for new chefs equipment while the blue team will be working with Darian fruit to make a special dessert for the night’s service in Hells Kitchen.

The red team heads off to enjoy their shopping spree. The blue team is back in Hells Kitchen working with the fruit to get the desert ready. No one on the blue team is happy about this punishment. Jared says “I think Frank is starting to realize that he is not as a good a chef as he thinks he is so he is buttering up Chef Aaron so that he will go back and tell Chef Ramsey that Frank is a good guy and he belongs here.” Meanwhile Frank is telling Chef Aaron that he “Has done dinners for the president.” Chef Aaron doesn’t seem to be impressed and tells everyone “Keep working.”

When the red team returns both teams get busy prepping the kitchens for service. After a pep talk from Chef Ramsey Marino opens Hells Kitchen. The red team gets off to a fast start and they are communicating well. Their first table of appetizers goes out successfully. In the blue kitchen Chef calls out the order and the blue team communicates well. Things go smoothly until a miix up on timing.

Despite the slight mishap the blue team manages to get their appetizers. Back in the red kitchen Kristen messes up by shorting the orders of risotto. Chef gets upset with Kristen as she nearly overcooks the scallops. The blue team is moving on to Entrees. Manda says “I am willing to do whatever it takes to make sure we don’t go down tonight. That’s why we’re a team.” Unfortunately Frank undercooks the fish and he tells Manda “Next time I tell you to watch something, watch it. Don’t send it up raw.” Chef gets very angry as the communication with the blue team breaks down and yells at Frank “Hey young man do you want to go home?” Frank says “No I’m good.”

The blue team gets their order out. Unfortunately it is sent back to the kitchen because the inside is raw. In the red kitchen the red team is dealing with only having three chefs. They are having to work multiple stations. The chef calls out an order. Kristen is struggeling on garnish which is holding up the whole kitchen. Instead of making asparagus for the Wellington, which chef has called for she is making green beans for another dish. Chef tells her “Don’t screw around with the garnish.”

In the blue kitchen Jared is struggeling with the New York Strips. Jared serves up one order that is overcooked and on the third attempt they are also overcooked. Jared tells Chef “New York Stips are hard for me. In the red kitchen Ashley and Ariel manage to put out perfect fish and Steak.

Back in the blue kitchen Manda is struggeling on garnish because of Jared’s screw up on the steaks. Chef stops the blue team and tells them to stop rushing. He then asks them “Does anyone want to know what is going through my mind right now?” He tells them “I don’t have the same four chefs I had in here last night. Frank asks Manda if she is ready on garnish and she says “No.”  They finally manage to get the order out.

In the red kitchen they are on their final table and they manage to get their final order out. Thhe blue team also manages to push across the finish line. When service is over Chef Ramsey congratulates the red team. He then tells the blue team to head upstairs and nominate two people for elimination.

When the team gets upstairs there is a heated discussion. The majority of the team blames Frank for the hold up in the kitchen. Frank gets angry. Jared asks him “Where are you going Frank?” Frank tells them “Now you can talk trash about me because I am leaving. “ He calls his teammates “Snakes” and says “I wonder how they made it this far.”

When the blue team gets downstairs Chef asks Manda for the two nominees. Manda tells Chef that they nominated Frank and Jared because they both had trouble bouncing back. When Chef asks Jared why he should stay he tells Chef “I am a communicator and Manda and Dannie don’t communicate at all.” When Frank is asked the same question he blames Manda and Dannie for sending up raw snapper.  In the end Chef decides to send Frank home.