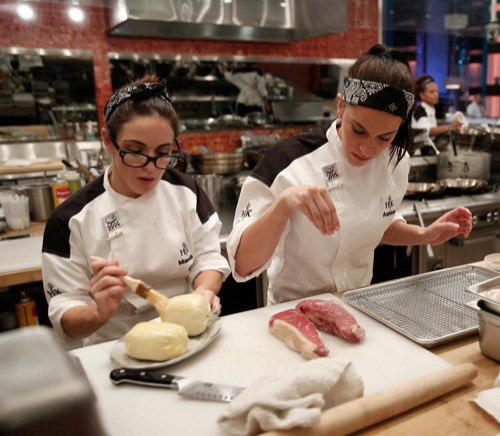 Tonight on NBC world renowned chef Gordon Ramsay’s television series Hell’s Kitchen where aspiring chefs compete returns with an all new Friday April 15, season 15 episode 14 called, “5 Chefs Compete,” and we have your weekly recap below. On tonight’s episode, Black jackets are handed out prior to the remaining chefs taking on their first individual challenge, which is to prepare a high-school lunch dish for a group of teenage judges.

On the last episode, great chefs needed to become great teachers. After a surprise visit from their loved ones, the remaining six chefs are quickly thrown into a challenge in which they must properly execute Chef Ramsay’s Branzino dish. During the challenge, the chefs would forced to wear a straitjacket while instructing their loved ones on how to successfully complete the signature dish. Did you watch the last episode? If you missed it, we have a full and detailed recap right here for you.

On tonight’s episode as per the NBC synopsis, “after receiving their coveted black jackets, it’s back to high school for the remaining chefs for their first individual challenge. Each chef will prepare a high school lunch dish, with the teenagers serving as the judges. The chef with the best report card will win the challenge and be rewarded with a trip to San Francisco for a VIP visit to Levi Stadium, home of the 49ers. Back in Los Angeles, the losers are left with trash duty and will be forced to sort all the recyclables from two weeks’ worth of trash.

Later that night, during a nerve wrecking dinner service, the chefs will have to prove they can be a leader as they cook for HELL’S KITCHEN’s very own sous chefs. The kitchen will also welcome VIP guests, mixed martial artist, author and actor Randy Couture and actor Neil Jackson (SLEEPY HOLLOW). With the chance to act as Ramsay’s sous chef, the pressure is on, but mistake after mistake leads to a shocking elimination.”

No more Reds or Blues. There are only the Black Jacket elites left on tonight’s episode of “Hell’s Kitchen” and it was fight to see who would remain on after tonight’s dinner service. However, Chef Ramsay has always had with weeding out the ones that needed to go home and did so again with his latest challenge.

The Final Five Chefs were taken to a mysterious location and it turns out this locations everything to do with the meal they were going to be cooking. Apparently the chefs had been taken to back to high school though luckily not their own. Instead they had been taken to a high school out in the city and there they met the hundred hungry teenagers that they were going to have to feed. Albeit individually.

The Final Five had their first individual challenge tonight and admittedly it was a tough one. They all had to cook for over a hundred people and teenagers were funnily enough picky. And yet they had to cook signature dishes. So it had to be good enough to impress Ramsay and it also had to be simply enough for the kids to actually eat it.

Only someone later cheated on this particular challenge. Kristin had thought that she could flirt her way into becoming both Prom Queen as well as the winner of this challenge. But while most of teenage boys had tasted her signature dish, she just couldn’t convince them all that hers one that deserved to win. So Kristin ended up in the bottom two on this challenge.

And the only person that had scored worse than she had, had been Manda. Manda had been nice and cordial to the crowd however her dish didn’t wow them. At least not like Ariel’s and Jared’s. Ariel and Jared had both made steak. Though the rub on Jared’s had been considered to be just a little better.

So as the challenge winner, Jared got tickets to San Francisco where he would be allowed to enter a closed football stadium and even meet a few of the players.

Yet, Jared managed to upset his best friend and number one supported during this entire competition when he decided to take Kristin with him. So it wasn’t that hard to guess why Jared had chosen to take the blonde Kristin over his best friend Ashley. He had done it because he had been interested in Kristin and while he may pretend that he had only done so in order to get to know Kristin better – he was kidding no one.

Ashley had later taken Jared to task for what he did. She told him that she had supported him from day one and that it didn’t matter that he thought Kristen might like football more. He knew and she knew he knew that he shouldn’t have left her to clean out the high school trash cans while he hung out with a blonde. Who he admitted to, by the way, that he would put Ashley up for elimination if she truly deserved it.

So Jared was selfish and it seems he had been a little confident in himself. As they all saw eventually during the dinner service. For the diner service tonight, each of the chefs were given the chance to work alongside Chef Ramsay as his sous chefs while his regulars were going to be sitting down with front row seats to the kitchen. And so it was imperative that the dinner service ran smoothly without any hiccups.

Though most of those hiccups ended up coming from Jared. Jared had messed up on appetizers when he handed Chef Ramsay some raw scallops and he apparently made the most of his mistakes during his “friend” Ashley’s turn on the hot plate. So he kept on handing over raw fish or overfired fish and Kristin had to finish up his station.

Thankfully, however, Jared had somewhat redeemed himself when it was his turn at the hotel plate. So he had mostly sunk Ashley and the one person to sink herself had been Manda. Manda had been find when it was her turn as sous chef and it seems that she didn’t have a problem with issuing orders. But Manda was just not communitive in the kitchen.

Jared would ask her when she was ready and she would ignore him until he walked over to her station. And she did that same thing to Kristen. Kristen tried asking her how long she’ll be and she’ll pretend it’s a minute yet hand over raw pieces of meat. So finally Ramsay had had enough of the same thing and he called everyone into the back. Where he had yelled at them.

He said they needed to get their act together and, when they couldn’t finish it, he then chose to keep them out of the kitchen. Ramsay said he would finish up the chef’s table although he had the Final Five apologize to his regular Sous Chefs before they left to deliberate. And again it wasn’t that hard to see who would be up for elimination.

Jared had failed on every seafood that had been put in front of him and Manda couldn’t fake success anymore. Much less cook steak. So the other three had had enough and they knew those two were their weakest chefs in the kitchen. And therefore Ramsay had been given a choice between the two of them, but he decided tonight to send both Jared and Manda home.

And now there’s only three left in the competition!