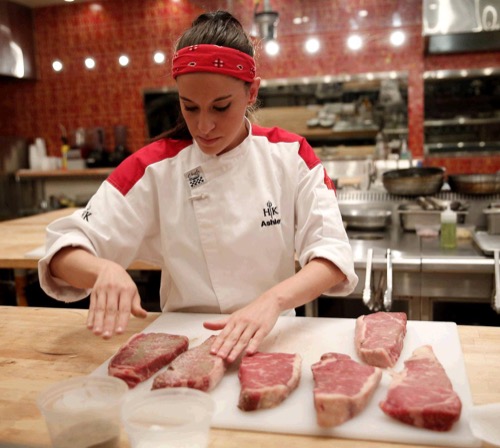 Tonight on NBC world renowned chef Gordon Ramsay’s television series Hell’s Kitchen where aspiring chefs compete returns with an all new Friday April 8, season 15 episode 13 called, “6 Chefs Compete,” and we have your weekly recap below. On tonight’s episode, the six remaining chefs receive surprise visits from their loved ones, who they end up having to teach how to properly execute a fabulous branzino.

On the last episode, Chef Ramsay put together a blind taste test challenge, in which each chef had to identify different ice cream flavors. This time, the blame didn’t just fall on the chef who guessed the wrong flavor. After three wrong guesses, a different team member was blasted by a mysterious ice cream topping. Did you watch the last episode? If you missed it, we have a full and detailed recap right here for you.

On tonight’s episode as per the NBC synopsis, “great chefs need to become great teachers. After a surprise visit from their loved ones, the remaining six chefs are quickly thrown into a challenge in which they must properly execute Chef Ramsay’s Branzino dish. During the challenge, the chefs will be forced to wear a straitjacket while instructing their loved ones on how to successfully complete the signature dish.

The pair with the winning dish will be rewarded with a luxurious day at the Burke Williams Spa for their entire team. The losing team will spend their day cleaning the entire dormitory. Later, during the dinner service, HELL’S KITCHEN welcomes special guests, Grammy Award winner Lil Jon, television star Cesar Millan, DJ Steve Aoki and singer Katy Tiz. It’s a race, and the first team to complete service will win the night and receive black jackets.”

This week on Hell’s kitchen the chefs are about to be surprised by the arrival of their family members. Chef Scott comes upstairs and tells the chefs wrap up the visit. The chefs head downstairs and Chef shows them the black jacket. Chef Ramsey brings out the family members and All of the chefs open their gift boxes to find strait jackets. Chef tells them that for their next challenge they will be teaching their family members to make one of his signature dishes while they are trapped in the strait jacket. Ashley says “I’m very confidant with my dad as my partner because he owns a restaurant back home. Meanwhile Ariel is struggling to get her mom to follow directions. Jared tells his mom “Please just don’t stab you or me.” He says “I definitely don’t feel safe with my mom in the kitchen.”

As a reward the red team gets to head off to the spa for a full day of treatment. As punishment the blue team has to clean the dorm. Jared says “I don’t know what to throw away. There is long hair and Mascara everywhere.” Manda says “All things considered it is not as bad as it could be. The guys are definitely a lot messier than the girls.” Jared shakes his head and says “I don’t think so. “

The red and blue teams are called to line up in the kitchen. Chef Ramsey tells the red team that they will be cooking for Lil Jon while the blue team will be cooking for Cesar Milan. Chef tells them that “This is the last night you will be cooking in two separate kitchens. The first team to complete their side of the dining room will receive their black jackets.” The chefs are very excited. The first order comes into the blue kitchen, but there is a problem with the Carbonara. It was severely over salted. Manda says “Come on Jared we have to keep the orders flying out of the kitchen. In the red kitchen the VIP guests have arrived. Ariel delivers on the appetizers to Lil Jon and his group.

In the blue kitchen the refired appetizers are ready for service and the blue team starts to push appetizers out of the kitchen. In the red kitchen Kristen has a small misstep with the scallops, but quickly recover. In the blue kitchen the chefs are working on their first appetizers. However the first dish stalls when chef finds a long, black hair in the food. When he asks who the hair belongs to Jared blurts out “It has to be Manda’s chef.” Manda says “I never touched the garnish.” Jared recovers quickly and their chef’s table gets their food.

In the red kitchen the ladies are moving on to entrees. Ashley is moving really slow. Chef tells her “I am twenty years older than you and I move twice as fast.” The red team manages to get their first entrees out. In the blue kitchen they serve cold steaks and Manda has burned the fish, In the red kitchen the ladies are quickly completing their entrées. In the blue kitchen Chef Ramsey is still waiting on Manda’s fish and Dannie’s steak, Dannie is struggling to get her order out and the kitchen is stalled bweecause she cannot give her team proper timing for the food. Chef says ” We’ve waited long enough. What’s the problem?” Dannie tells him “They’re cold in the middle. “ Chef asks “Who took them out?” Dannie says “I did Chef.” The red team completes their dinner service fist and they receive their black jackets.

The blue team finally manages to complete their dinner service. Chef says “Since you will soon be working as one team I want all six of you to decide which two chefs should be put up for elimination.” When they get upstairs Jared tells them “I am the strongest chef on the team. I have hustle and I was running back and forth between stations.” Dannie asks Jared why he is yelling at her. She says “I don’t have to handle situations that way.” Ashley asks her “How are you going to run a kitchen if you can’t deal with confrontations?”

When the chefs go back downstairs Chef Ramsey asks Manda who the two nominees are. Manda tells her that they decided to nominate her and Dannie. When Chef asks Manda why she should stay she tells him “I never stop talking and I work really hard for you.” When Chef Ramsey poses the same question to Dannie she tells him “I had a terrible service and I know it. I am a fighter and I don’t know why they think I have given up.” Chef then calls Jared up and gives him his black jacket. Next he tells both Dannie and Manda to take off their jackets. He decides to give Manda her black jacket and send Dannie home.