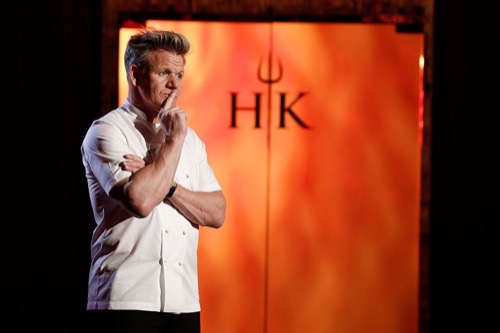 On the last episode, after receiving their coveted black jackets, it’s back to high school for the remaining chefs for their first individual challenge. Each chef prepared a high school lunch dish, with the teenagers serving as the judges. Did you watch the last episode? If you missed it, we have a full and detailed recap right here for you.

On tonight’s episode as per the NBC synopsis, “after Chef Ramsay unexpectedly eliminates two contestants, the remaining chefs will be challenged to perfectly prepare a steak dish, plus two stunning sides in just 40 minutes. They’ll have to impress special guest judge, executive chef Ari Rosenson from CUT by Wolfgang Puck in Beverly Hills, who will have the final say on the winner of this meaty challenge.

The winner will be rewarded with a fantastic dining experience at CUT, accompanied by Chef Ramsay, where they will be served a meal prepared by Rosenson himself. Later that evening, during the dinner service, each chef will take a turn leading the kitchen by working at the hot plate. But Chef Ramsay and his sous chefs have a few tricks up their sleeves, as they test the contestants’ attention to detail and quality control. Find out which two chefs will move on to the finals.”

This week on Hells Kitchen the final three head upstairs after the surprising double elimination. Ashley is sad to see Jared go because “He was my best friend here.” However she says “I don’t have time to be sad because I have to pull it together to win this competition.” Ariel is excited to be part of the final three and Ashley can hardly believe she is still in the competition. Kristen says “It is going to be really tough because we are all as strong as the other. You are literally going to have to trip the girl behind you as they are walking out the door.”

The next morning Chef Ramsey meets with the three finalists and presents them with three briefcases. When one of them is opened there is a quarter of a million dollars inside. The Chef asks them what they are thinking. Kristen says “A house for my mom.” Ariel says “Hard work.” and Ashley says “Winning.” The ladies then choose a number from the other three briefcases. When each one is opened prime cuts of steak are revealed. Chef Ramsey tells the final three that they are to him a steak dinner with two sides.

In order to help judge the dishes Chef Ramsey brings in Chef Ari Rosensom from Wolfgang Puck’s restaurant. Ashley is first up. Chef Ari loves her steak, but tells her that her peppers are a little undercooked. Ariel is up next. Both chefs are very impressed with Ariel’s steak dish. Chef Ari tells her “The steak is beautifully cooked and the Squash is well done.” He also tells her “There is a lot going on in this dish.” Kristen is up next and makes a simple steak and potatoes dish. Chef Ari is also impressed by Kristen’s dish and tells her “It is really hard to nail potatoes so perfectly.” Kristen seems excited. After tasting all three dishes Chef Ramsey asks his guest which dish he prefers. Chef Ari tells him that the dish that best suits his flavor profile is Kristen’s dish.

Kristen is very excited to have won the challenge. Chef Ramsey tells her that Ari Rosensom will be cooking for her. He also tells her that he will be joining her for lunch. Ariel and Ashley are commended on their dishes but told that because they lost they will be scrubbing down the food truck and prepping the kitchen for service.

On the way to the restaurant Kristen asks Chef Ramsey what the turning point was in his life. He tells her “27 and 28 were big years for me because it was when I realized that I had to get myself together.” Kristen understands and says “27 is a big year for me too. Up until then I had been rebellious and doing everything to go against my parents.” When they arrive at the restaurant Kristen’s parents are waiting for her. Chef tells her “The whole restaurant is just for you.” Kristen happily sits down to have lunch with her family and Chef Ramsey tells her parents “You have an amazing daughter.” He then tells her “I will see you back at Hells Kitchen.” After chef leaves Kristen and her family sit down and talk about her experiences in Hells Kitchen. She tells them that she won the award in a steak challenge. She also tells them about the fight with Jackie and that she walked away. Her parents are really proud of her.

Chef Ramsey tells the ladies “Tonight is the service that will determine who enters the finale.” He also tells them “Tonight you will also each have a chance to run the pass and take control of Hells Kitchen.” The first orders of appetizers are leaving the kitchen quickly. Ariel gets the first turn at the pass. She immeadiately takes control and tries to make sure that her appetizers out of the kitchen. Ariel’s first test is a risotto made of carrot puree instead of Squash. Chef tells her “Check on everything.” Ariel is a bit frustrated and the next time she is on point. Ariel says “This is my only opportunity to prove that I can do it.”

Kristen is next at the pass. She says “I have to be the best I can be.” Kristen notices that the Wellingtons don’t look the same and send them back to Chef Aaron. Next up Ashley burns the meat and Kristen sends it back. When she asks her how long on the refire Ashley doesn’t answer. Chef Ramsey tells her “When you don’t answer you aren’t just screwing her you’re screwing me too.” Once again he asks Ashley how long the meat is going to take and once again Ashley does not respond. Kristen says “I don’t know where Ashley’s head is, but this is not going to fly.” Next up Marino brings her an improperly written ticket. Kristen calls out the order and then realizes that they no longer have Cappalini on the menu. She goes back and has Marino rewrite the ticket. Kristen also spots Risotto made with Carrot puree and other mistakes.

Up next is Ashley taking her turn at the pass. Her first order of appetizers are a fail. She doesn’t manage to spot undercooked rice. This mistake seems to overwhelm her so Chef Ramsey pulls her aside and tells her “Everyone on the hot plate has made a mistake. No one is perfect. I want to see how you fight back.” After Chef’s conversation Ashley manages to pull herself together. When Chef replaces the puree on one of the dishes she imeadiately spots that something isn’t right. Then she misses Chef Christina’s sabotage of Salmon instead of Char. Despite the slip up Ashley maintains control of the kitchen and the three finalists manage to complete dinner service.

After service Chef tells them “Think about everything that has happened since you walked into Hell’s Kitchen and come up with one person who does NOT belong in the finale.” The three ladies debate pretry heatedly about why the other two should not be in the finale. Ashley says “I am not going down without a fight.” Kristen agrees.

When the ladies come back downstairs Chef Ramsey asks each of them who they felt should not be the finale. Ashley says “Ariel doesn’t belong in the finale.” Meanwhile both Kristen and Ariel agree that Ashley should not be in the finale. Chef reveals the first finalist and it’s Kristen. Kristen is very excited and says “Now I get to run my kitchen the way I want to. The second finalist is Ariel. Ariel is very excited. Chef tells Ashley “Don’t be upset because you were born to cook and I refuse to take your jacket because there was so little separating you from the finale.”