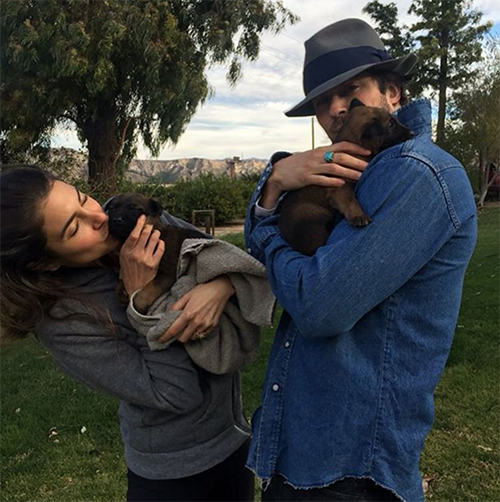 Ian Somerhalder has responded after news that Nina Dobrev may be engaged. The Vampire Diaries star posted a picture of himself and Nikki Reed holding their two new foster pups. Ian must want fans to know that he is not bothered by the news that Dobrev has moved on with Austin Stowell.

Somerhalder and Reed posed with their two new temporary family members. Nikki also announced on Twitter that they had taken in the foster pups. Ian has stayed quiet on the subject of his ex-girlfriend and her whirlwind romance with Austin Stowell. Of course, Somerhalder doesn’t really have room to talk about rushing things. Ian married Nikki Reed just nine months after they started dating. It was a romance that most expected to fade as Ian rebounded from a painful split with Nina Dobrev.

Ian must still be trying to prove everyone wrong about his marriage to Nikki Reed. Somerhalder seems to have his animal rights activist soulmate in Nikki or, at least, that’s the image he’s trying to portray. That may be why Somerhalder and Reed took in two new foster puppies and then gushed about them so publicly recently. It can’t be a coincidence that Ian posted the sweet family photo just days after speculation of a Nina Dobrev engagement.

Likewise, it’s obvious that Nina is rubbing her relationship with Austin Stowell into Ian’s face. Nina loves to drop pictures of herself and Stowell enjoying some intimate moments on social media. Dobrev seems to be happy that she moved on from Ian. The mixture of makeout pictures with Stowell, handstands on the beach, and daredevil skydiving photos are proof that Nina is trying to live life to the fullest whether Ian is in it or not.

The whole passive-aggressive back and forth between Ian Somerhalder and Nina Dobrev is proof that neither is really over the other. Maybe that’s why Nikki Reed likes to keep her husband away from his former The Vampire Diaries co-star. This most recent response from Ian and Nikki is nothing new and as long as TVD is still on the air, we can probably expect more of this subtle drama.