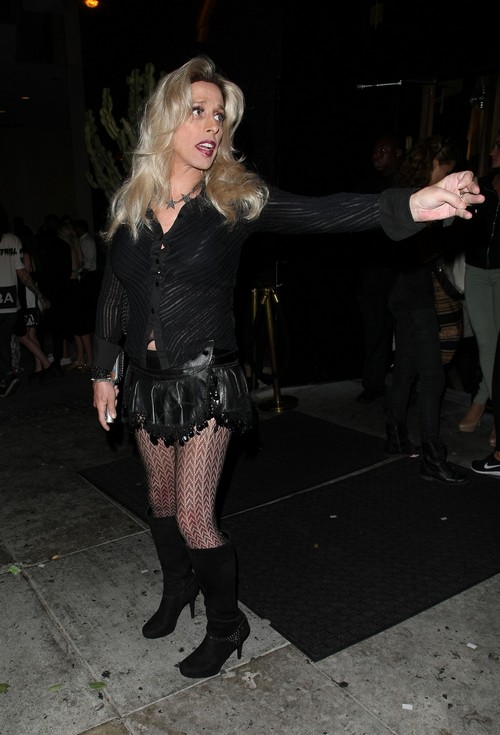 Alexis Arquette is furious with Jada Pinkett Smith, going so far as to call the actress a hypocrite. Arquette demanded that Jada and Will Smith admit they are gay and have spent years covering for each other. Alexis’s statement came after Jada expressed frustration over what she perceives as an intentional lack of diversity in the Oscar nomination process.

This hearsay has plagued the couple for years and there is absolutely no proof whatsoever that either Jada Pinkett Smit or Will Smith is lying about their sexual preferences. But that didn’t stop the transgender actress from adding her two cents to the conversation as reported by OK! Magazine, Feb. 8, 2016 print edition.

Arquette stated that until Jada and Will come forward and are 100% honest she has no intention of listening to anything either one of them has to say. As part of her statement Arquette said, “Gays have enemies who lurk in gilded cages.” Can we assume that Alexis believes Jada and Will are the enemies lurking in those gilded cages?

Other actors, actresses and commentators were none too pleased with Jada and Will’s decision to boycott the Oscar ceremony. Did Alexis Arquette take things too far by stirring up unproven reports on whether or not Jada Pinkett Smith and Will Smith are straight or gay?

Jada and Will’s choice to neither attend the Academy Awards nor watch the ceremony on television sparked conversations about the role of race in the entertainment industry. Actress and talk show host Stacey Dash said “either we want segregation or integration.” Actress Janet Hubert – the original Aunt Viv on “Fresh Prince of Bel Air” – reminded Jada that life isn’t fair, “That’s just not the way life works, baby,” was what Hubert had to say on the subject.

Why did Alexis Arquette feel compelled to drag what amounts to innuendo and hearsay about Jada Pinkett Smith and Will Smith into the conversation? Does it really matter one way or the other? Jada, for the most part, calmly and clearly stated an opinion, to which she is entitled, right or wrong. There does not appear to be a statement from Jada or Will regarding to Alexis’s accusations at this time.