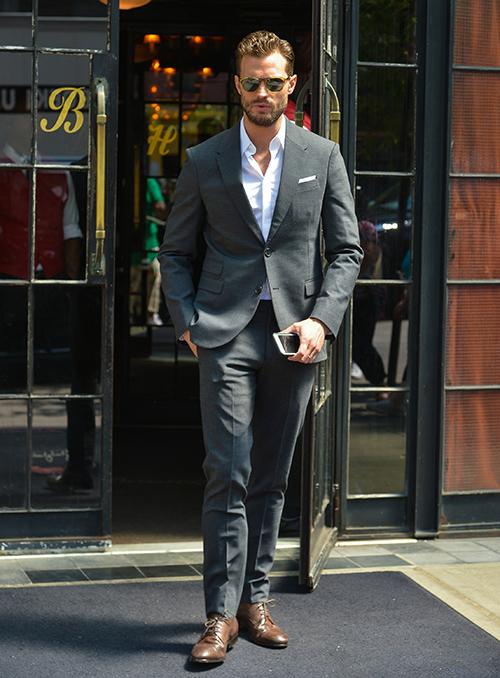 Fifty Shades of Grey was a massive hit at the box office, yet Jamie Dornan was blasted for his performance in the film. Not only did his co-star Dakota Johnson outshine him, but he also had a hard time convincing audiences that he was the right choice to play the kinky Christian Grey character. And now Jamie Dornan himself admits that he might have ‘stifled’ the movie.

It wasn’t until ’Fifty Shades of Grey’ that Jamie Dornan became a household name. So it’s no wonder that the pressure to star in a blockbuster hit got the best of the Hollywood actor. Even though ’Fifty Shades of Grey’ got mixed reviews, the film did make half a billion dollars worldwide. And now Jamie Dornan says that he’s learned from the mistakes he made in the first film and is hoping that ’Fifty Shades Darker’ is going to be a much more enjoyable film for fans to watch than the first time.

According to the Hollywood Reporter, Jamie Dornan said, “The whole experience was actually quite different. A lot of the pressure of the first movie was gone. Essentially I feel like all of that pressure when you’re making the first of a franchise of [movies based on] books that mean so much to people that has so much attention on it, it can be quite paralyzing I think. I think a lot of that crept in the first time around and it maybe affects the work.”

It’s obvious that Jamie Dornan knows he was badly mocked for his first and that’s why he’s been making quite the effort to prove to his critics that he’s not the questionable actor everyone is making him out to be. After all, if Jamie Dornan can’t even play a good enough Christian Grey, then how is he going to take on more important roles in the future? That actor knows this and as much as he loathes being a part of the franchise, he knows that ’Fifty Shades Darker’ is going to be his make-it or break-it movie.