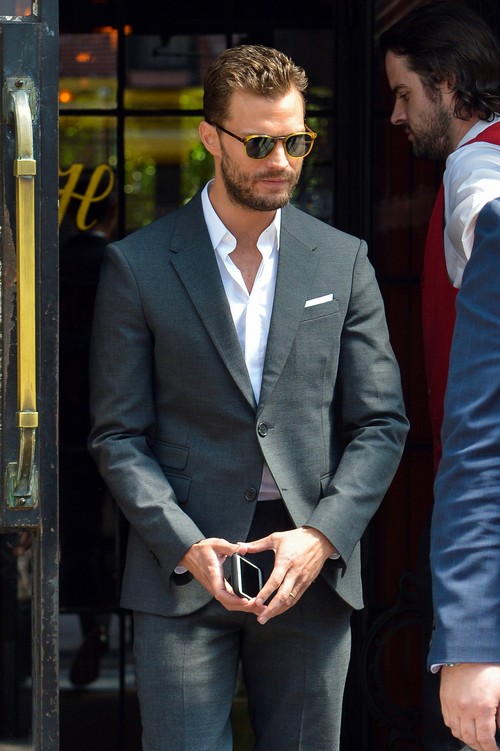 The potential for a Jamie Dornan’s full frontal nude scene in the upcoming ‘Fifty Shades Darker’ is building major momentum for the follow up to last year’s ’Fifty Shades of Grey.’ Jamie Dornan himself recently opened up about the possibility of fans seeing his manhood in the movie, which comes out on Valentine’s Day 2017.

Jamie Dornan, who plays sex-addict Christian Grey in the hit book-to-film series, has become a household name thanks to his ‘Fifty Shades of Grey’ fame. Even though critics were split when it comes to his onscreen Christian Grey performance, many fans still want to see a Jamie Dornan full frontal nudity scene, especially since his co-star Dakota Johnson stripped down for her role as Anastasia Steele in the first film.

Speaking to Entertainment Tonight, Jamie Dornan gave fans quite the tease by suggesting that anything can happen in ‘Fifty Shades Darker.’ Jamie Dornan said, “The truth is that I don’t know the answer to that. You’ll have to wait and see. [Laughs] You certainly can’t be annoyed with that sort of status. It goes with the territory a little bit. But I guess my thing is not to pay a great deal of heed to it.”

Of course, fans already know that the only thing that will make a Jamie Dornan full frontal scene happen is if the actor is given a bigger paycheck for the role. Jamie Dornan has already proven himself as an actor who is willing to do just about anything to be famous in Hollywood.

While other actors such as Charlie Hunnan turned down the Christian Grey role in ‘Fifty Shades of Grey,’ Jamie Dornan saw it as an opportunity to finally make his big break in Hollywood.

While filmmakers are yet to confirm a Jamie Dornan full frontal nude scene, there’s no doubt that viewers will definitely be seeing more of Christian Grey naked in the next film. Considering how ‘Fifty Shades of Grey’ was ridiculed for it’s plot and sub-par script, the only way movie goers will buy tickets for ‘Fifty Shades Darker’ is if they are guaranteed to at least see Jamie Dornan naked.

In fact, even Dakota Johnson went on the record to say fans deserve to see Jamie Dornan naked earlier this year.

Jamie Dornan spotted leaving the Bowery Hotel in downtown Manhattan en route to record an appearance on The Late Show with Steven Colbert on August 4, 2016. Dornan is currently filming “Fifty Shades Freed,” the third of the Fifty Shades of Grey trilogy. By FameFlynet