Jamie Dornan Refuses To Get Naked For ’Fifty Shades Darker’ – Film To Bomb At The Box Office? 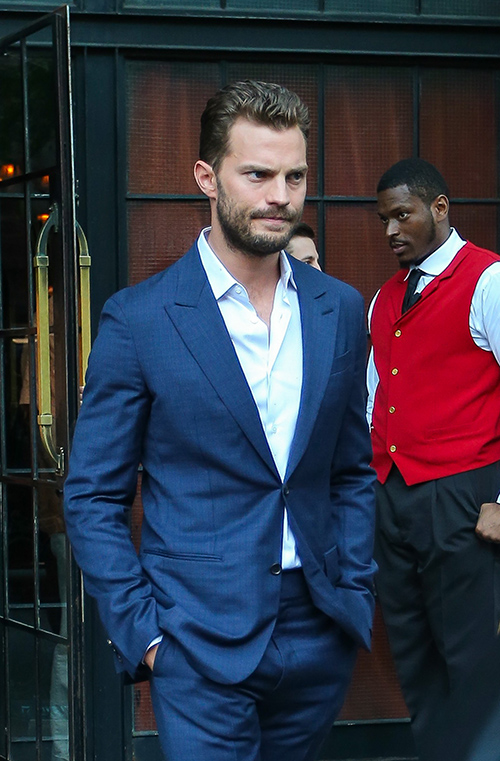 Jamie Dornan is no doubt distancing himself from the ’Fifty Shades of Grey’ franchise. The reluctant Christian Grey recently opened up about Hollywood’s ‘double standard’ when it comes to onscreen nudity, signaling that he not only refuses to get naked but that the upcoming ’Fifty Shades Darker’ might bomb at the box office because of it, too.

Jamie Dornan has made it no secret that he is looking to distance himself from the ’Fifty Shades’ franchise. Even though the series helped make him a household name, Jamie Dornan has called the movies ‘silly,’ as he knows he is being endlessly mocked online for playing sex-addict Christian Grey. Yet, now, the Irish-born actor has gone one step further by calling out Hollywood’s nudity double standards as “unfair.”

Speaking about the criticism he received for not going full frontal in ’Fifty Shades of Grey,’ Jamie Dornan told Vanity Fair, “I do think it’s unfair. I understand why women have an issue with that. I know it’s something that a lot of people have opinion on. There’s more of an active taste for women to take their clothes off and be seen as a sex object. That can be gratuitous and I don’t agree with that. There’s plenty of male genitalia on show. Orlando Bloom did it today without even needing to.”

Clearly, Jamie Dornan is trying to anger ’Fifty Shades Darker’ filmmakers by suggesting that Dakota Johnson’s naked scenes shouldn’t be filmed. What’s more, his refusal to do a Christian Grey full frontal scene goes to show that he’s willing to pick up his ’Fifty Shades Darker’ paycheck but he won’t do the same kind of work that his co-star Dakota Johnson is supposedly being pressured to do.

Jamie Dornan’s career depends on the success of ’Fifty Shades Darker.’ If the film bombs at the box office, there’s no doubt that Jamie Dornan’s dreams of being on Hollywood’s A-list will never happen. After all, if he can’t bring in audiences for a movie like ’Fifty Shades Darker,’ then both producers and directors are going to have a hard time taking him seriously. And based on his comments about nudity, if he’s really serious about Hollywood’s ‘double standards’ on nudity, then perhaps a Jamie Dornan full frontal scene is well overdue.

Tell us CDL readers, do you think a Jamie Dornan naked scene will help make ’Fifty Shades Darker’ a success when it comes out next year? Is Jamie Dornan right about the film industry’s double standards on male versus female nudity on the big screen?