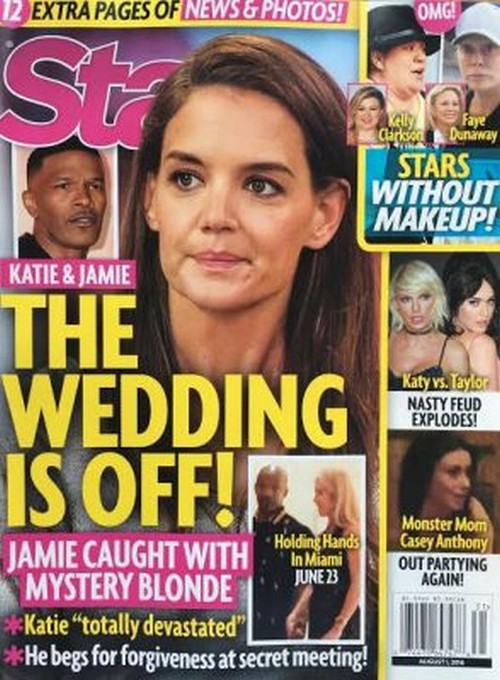 It looks like Jamie Foxx and Katie Holmes’ break-up is the real deal this time. But, can you really “break-up” if you never technically admitted that you were even together? It’s no secret that there have been some bumps in the road for the not-so-secret couple over the course of the past few months, but according to this week’s edition of Star Magazine, Jamie Foxx and Katie Holmes are REALLY over, and he might already have a new girlfriend!

This week’s cover of Star Magazine, features a photo of a distraught Katie Holmes, the headline screams, “Katie and Jamie: The Wedding Is Off!” There is also a photo that was snapped of Jamie Foxx out and about with a mystery blond woman, who he was allegedly “sneaking around with” behind Katie’s back. The cover goes on to tease that after Jamie got “caught,” he begged Katie for her forgiveness, but she apparently doesn’t want to hear it.

Photos were snapped of Jamie Foxx and the blond woman holding hand in Miami on June 23, after they hit the internet, Katie reportedly was devastated.

An insider claimed to have heard the couple arguing over the blond woman and they dished to the tabloid, “Katie was totally devastated and incredibly hurt after seeing the photos of Jamie with that woman. He swore nothing happened, yet still begged Katie’s forgiveness, pleading with her not to end their relationship.”

Here’s the thing, multiple media outlets reported that Jamie and Katie Holmes had broken up way before June 23, when he was spotted with another woman. So, there is something definitely fishy about the timeline.

Was Jamie cheating on Katie Holmes, or had they already broken up and he was moving on? As far as the wedding being cancelled, don’t you have to have a wedding date set in order to cancel it?

What do you guys think? Are Jamie Foxx and Katie Holmes really over? Do you believe he was unfaithful? Share your thoughts in the comments below!