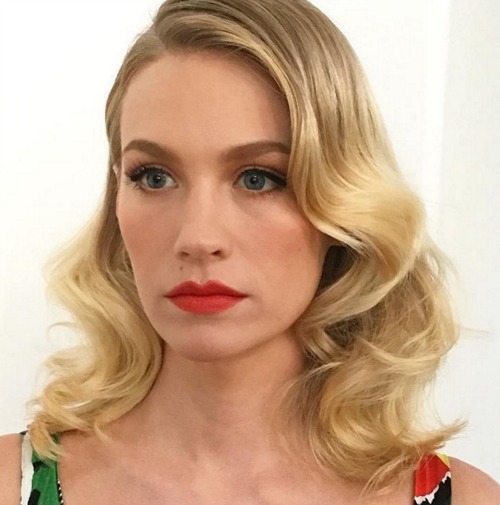 January Jones has finally broken her silence on her former lover Ashton Kutcher, although she’s still refusing to name the identity of her son Xander’s father. In fact, the former ‘Mad Men’ star has opened up about her ex and how he was never supportive of her Hollywood career, yet it’s long been rumored that Ashton might have been one of January’s possible ex-lovers who might be the father of her child.

Back in 2011, rumors of January Jones and Ashton Kutcher hooking up spread like wildfire, especially since it was during the same time the actor and Demi Moore’s marriage was in trouble. Even though it was also rumored that Michael Fassbender, Matthew Vaughn and Bobby Flay were also possible baby daddy candidates, Ashton stayed incredibly quiet about the rumor, although it supposedly caused plenty of fights between him and Demi.

Now, January is finally talking about how she would like to reach out to Ashton, even though they haven’t spoken to each other in years after he supposedly dissed her. During an interview with ‘Watch What Happens: Live,’ January back peddled on the rumor that Ashton had slammed her acting skills while they were dating by saying, “I said that someone I had dated previously wasn’t encouraging of my acting – not that I couldn’t.

I don’t know if that person had ever actually seen me act. But the person who wrote the interview did the math and thought it might be him; I never really said who it was.”

January also added that she’s “super happy” for Ashton Kutcher and his wife Mila Kunis and that she would like to send a congratulatory text on the upcoming birth of the couple’s second child.

Of course, the timing of January’s interview has both fans and critics alike guessing if the actress is willing to bury the hatchet with her ex and perhaps even reveal the identity of her son Xander’s father. Of course, the only person who wouldn’t be too pleased with January wanting to reach out is of course, Mila Kunis.

The last thing she wants is to have one of her husband’s ex-girlfriends contact him again, especially if there’s the possibility that he might indeed by the father of her one and only son.

Plus, January has long been rumored as Hollywood’s biggest home wrecker, as she was linked to plenty of cheating scandals, including rumored affairs with Bobby Flay and Liam Hemsworth. There’s no doubt both Ashton and Mila don’t want that kind of drama in their life right now, especially since they are expecting their second child together. What do you think, CDL readers?

So that happened.. ❤️

I would watch tomorrow night if you know what’s good for you. #notaveiledthreat #obviousthreat @lastmanfox