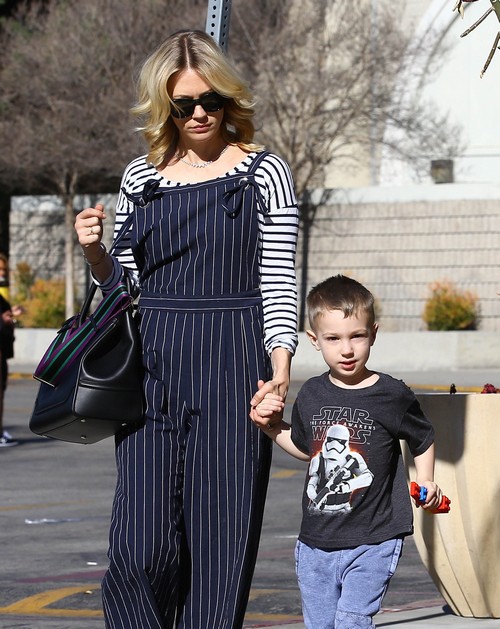 January Jones enjoyed a pre-Valentine’s movie date with 4-year-old son on Saturday, February 13. Jones is still hiding the identity of Xander’s biological father and no one is quite sure why. Here are just some theories in the “Who’s the Daddy” game – because it’s entirely possible January used a donor and in vitro fertilization to conceive Xander – still, January must reveal Xander’s father one day, if she knows him?

Comedian Jason Sudekis and the “Mad Men” actress split sometime in, ironically, January of 2011 after dating for about seven months. Surprise, surprise! Xander came along in September 2011. The assumption has been that Sudekis is the boy’s father. But, not so fast!

Liam Hemsworth cheated on Miley Cyrus with January Jones sometime in 2012. That’s not to say Miley found out about it in 2012 and Liam may have been having an affair with Jones in 2011. That could be why Jason hit the pavement after just a few months with January.

It was previously reported that celebrity chef Bobby Flay was having multiple affairs while married to Stephanie March. These revelations came to light sometime in 2013, but, again….Bobby could have been sneaking in and out of January’s bedroom long before everyone had a hunch Flay and Jones might be involved.

Most people think “Mad Men” co-star Jon Hamm is Xander’s father. While Hamm and Jones were portraying hubby and wife on-screen there was speculation that the duo was hooking-up off-camera too, despite the fact that Jon was living with actress and screenwriter Jennifer Westfeldt. Hamm and Westfeldt officially called it quits in 2015 after 18 years together.

Director Noah Miller just might be Xander’s daddy. In August 2012 January was spotted holding hands with Miller as the two took a stroll in Santa Monica with Xander in tow. Neither Jones nor her rep ever commented on whether or not Noah and January were ever dating.

Why hasn’t January Jones come forward and revealed the identity of Xander’s daddy? Is the actress embarrassed because she just doesn’t know who the 4-year-old’s father is? There’s certainly a lot of guessing going on. Who could be the little guy’s daddy? Will we ever know? Does January even know?

Let us know what you think in the comments below and come back to CDL for the latest celebrity news.

Proud mom January Jones is seen taking her son Xander to see a movie at AMC Theaters in Canoga Park, California on February 13, 2016. January is enjoying some quality time with her growing boy by FameFlynet