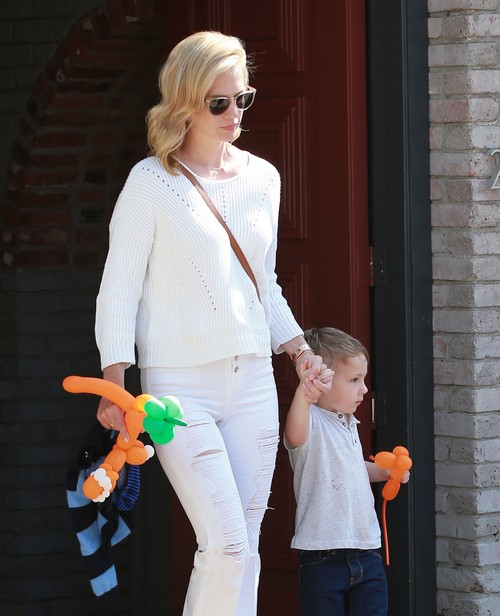 Stephanie March claims in divorce papers that her estranged husband Bobby Flay was a cheater involved in multiple affairs during her marriage, including with January Jones. Okay, we have to admit, this divorce is getting out of hand. It feels like every other day we are hearing more drama that is just making this divorce between Bobby Flay and Stephanie March a complete and total mess.

Stephanie March, 40, is now alleging that Bobby Flay had not one, not two, but three affairs with other women while he was still married to March. One of the affairs, March alleges, was with January Jones, the 37-year-old Mad Men star.

A source recently spoke out to In Touch regarding these allegations and said, “Stephanie is claiming in court papers that Bobby committed adultery with January several times during the early months of 2010. She says they had sex many times and in different places.” One of these places being the London hotel in Los Angeles.

As of now, Bobby Flay, Stephanie March and January Jones have refused to respond to comments. The allegations did not stop there though.

The court papers, obtained by In Touch, reveal that March alleges that Bobby Flay also went behind her back and had an affair with a food stylist that he worked with on multiple occasions. March claims that this happened various times over the course of three years. She also alleges that Flay cheated on her with his assistant, Elyse Tirrell, in the family home.

Prior to this, we reported that Stephanie March believed that she was the reason for Bobby Flay’s success, and that she should be granted more money in the divorce settlement because it was her palette that led Flay to coming up with the final menus for his five star restaurants.

The inside source ended their statement by saying, “This fight is far from over. Stephanie only wants what’s fair, but she’s prepared to do what she needs to get it.”

With all of these accusations coming to light since Bobby’s divorce filing, Bobby Flay and Stephanie March’s marriage has been forever tainted and no matter whether or not these two parties can come to an agreement, their entire relationship has been tarnished by these irreversible actions.