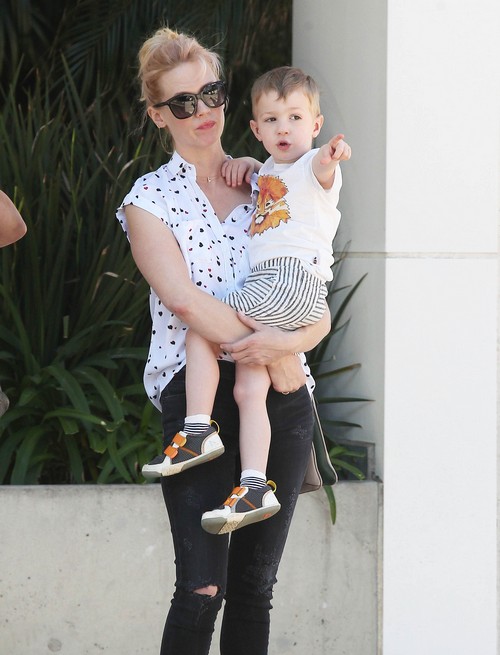 Does Bobby Flay have a love child with January Jones? Bobby Flay’s divorce from his wife Stephanie March is getting very messy, and the Law & Order actress mailed back his alimony payment and is contesting their pre-nup on the grounds that the celebrity chef cheated on her with multiple women. According to multiple reports Bobby Flay not only had an affair with fellow chef Giada De Laurentiis, but also cheated on his wife Stephanie with actress January Jones and his personal assistant Elyse Tirrill. According to a new report, Stephanie March is certain that January’s son Xander is actually Bobby’s baby!

The May 6 edition of GLOBE Magazine reveals, “Bobby Flay’s fuming ex Stephanie March is demanding to know whether he is the daddy of January Jones’s love child! Steph is broiling over buzz that her 50-year-old hubby marinaded the Mad Men lamb chop. After Bobby and January reportedly turned up the heat in 2010, she had a bun in the oven. Her son Xander was served up just a few months later. January has never revealed the name of her son’s father. But, Stephanie is suspicious and the kid does look a bit like Bobby!”

If Stephanie March can prove that Bobby Flay is indeed the father of January Jones’s baby – then he might as well kiss his million dollar empire goodbye. January Jones has kept the father of her baby a secret this long, odds are she doesn’t want the news to get out – so Bobby Flay probably doesn’t have to worry about the Mad Men actress exposing his love child.

What do you think of January Jones being Bobby Flay’s baby-mama? Do you really think that two celebrities could have kept a love child a secret for this long without someone exposing them? Will Stephanie be able to prove that Bobby cheated on her with January Jones? Let us know what you think in the comments below!