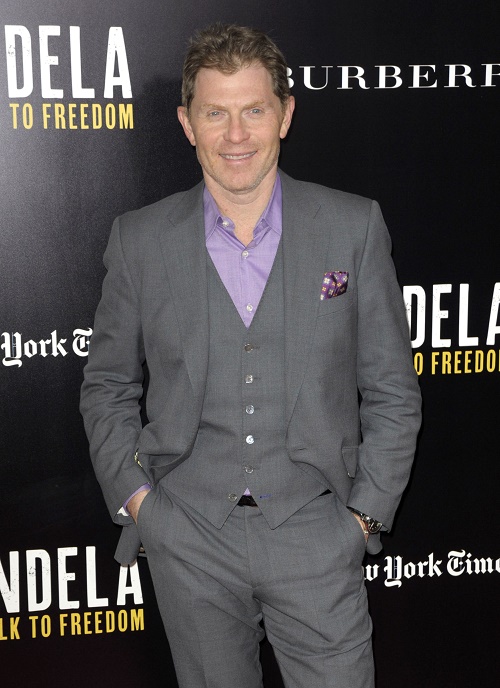 Bobby Flay’s divorce from Stephanie March just went from messy…to messier. The celebrity chef and his soon to be ex-wife have been fighting tooth and nail since they went their separate ways. March is clearly bitter over Flay’s multiple affairs and she is determined to take him for every penny he is worth. Bobby and Stephanie originally had a prenuptial agreement in place stating that she would receive an allowance in the amount of $5,000 a month in the event of a divorce – but Stephanie is battling to get more of the money she believes she is entitled to.

Not only did Bobby Flay allegedly cheat on Stephanie March, but according to his fuming ex – he owes all of his celebrity chef success to her. March and her lawyer recently faced off against Bobby Flay in court and the actress revealed that if it weren’t for her Bobby Flay wouldn’t be a household name. According to March, she tasted all of his food and offered him advice on how to improve the dishes. Stephanie also argued that she helped Flay create a very successful menu at one of his eateries.

At the end of the day – this really isn’t about the money. Obviously, Stephanie March wants money, but she also wants revenge. Flay was rumored to cheat on his wife with multiple women, including fellow chef Giada de Laurentiis and his 28-year-old personal assistant, Elyse Tirrell. What’s the best way to make your husband pay for cheating on you? By making him pay…literally. Bobby and Stephanie’s divorce will most likely be in the courts for months, so grab your popcorn – the show is just getting started.

Do you think that Stephanie March is being ridiculous? Or is she entitled to every penny she is trying to get because Bobby Flay cheated on her? Do you think her argument will win out in court? Let us know what you think in the comments below!