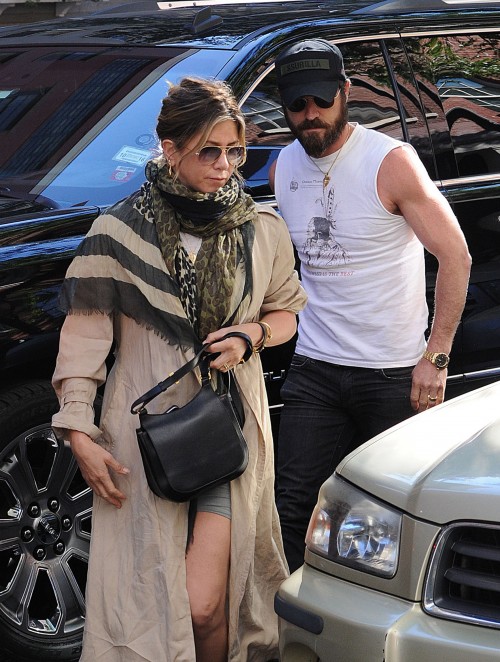 Jennifer Aniston may be pregnant at long last at age 47 with the child of husband Justin Theroux. New photos published by the UK’s Daily Mail show a significant baby bump while the duo vacationed in the Bahamas last week. Either she’s preggers at last – or has really let herself go.

According to the UK news source, Jennifer Aniston found out last month that she was pregnant, but judging from the bump, she looks to be a few months along. Here in the US, InTouch Weekly will debut the baby bump photos when their new issue hits the newstands this week.

You can see in the photos (pics below) that Jennifer Aniston and Justin Theroux were seen entering and exiting his New York City apartment yesterday and, despite the summer heat, Jen is in a long coat that covers her belly and she pulled the coat close.

For good measure, Aniston also held her large purse in front of her stomach as she and Justin exited their SUV. She’s obviously using the coat to hide her baby bump since, underneath it, she has on shorts and sneakers.

Why cover up shorts with an out-of-season trench coat unless you have something to hide? At age 47, this would indeed be something of a miracle baby for Justin and Jen. The duo left Justin Theroux’s SoHo apartment and checked into a nearby hotel.

No doubt it’s easier to hide away in a secure luxury hotel than at his apartment were paparazzi know to lurk waiting for pics. The baby news could not come at a better time for Jen since she just lost her estranged mother Nancy Dow on May 25.

Jen had been estranged from her mother for more than 10 years after her mom penned a tell-all book about the Friends star called From Mother to Daughter to Friends. Jen still has her dad around, though, soap star John Aniston (Victor Kiriakis, Days of Our Lives).

At the time of her mother’s death, there was talk that Jennifer Aniston and Justin Theroux had hit the skids but now they look lovey dovey on their recent Bahamas vacation where Justin seemed very affectionate and taking care of his pregnant wife.

Although the Daily Mail reports that Jen and Justin found out they were pregnant in May, it was likely much earlier. See the pic below of Jen at the April premiere of her movie Mother’s Day? She was already obscuring her thickening waist in a bulky outfit. 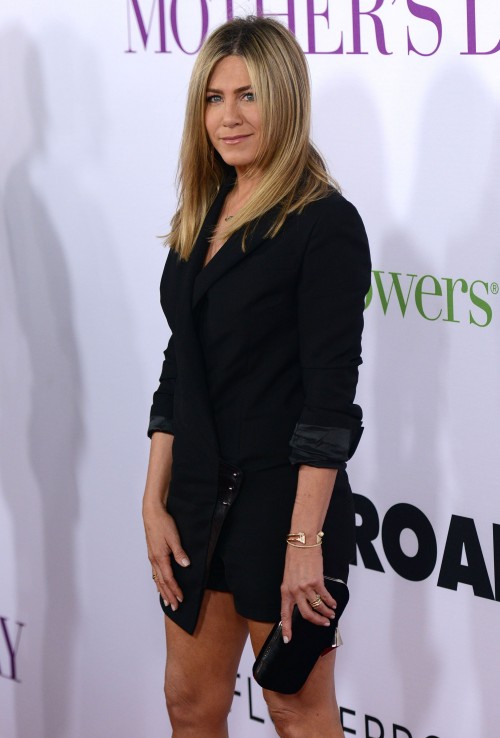 Jennifer won’t be able to hide that bump for too much longer – no matter how many long coats she has in her wardrobe. So when will the duo make a public announcement? They may not bother to since news has already broken with photos to prove it.

Jen and Justin will celebrate their one year wedding anniversary on August 5, 2016, and it seems like they’ll have even more to celebrate this year since Jen’s baby dreams are finally coming true. No due date is known yet but if she’s a few months along, it will be an early 2017 baby.

What do you think Jen Aniston fans? Are you thrilled that Jen is finally pregnant and can have a child of her own? Perhaps this will put to rest all the talk of jealousy over Angelina Jolie and Brad Pitt’s expansive brood of kids.