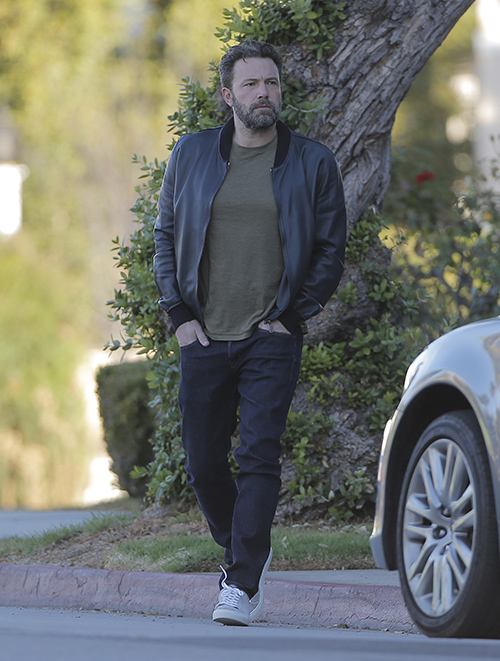 Ben Affleck apparently got very flirty and touchy with his young co-star on the red carpet recently, leaving Jennifer Garner completely outraged over his behavior. The Hollywood actor got rather handsy with his ‘The Accountant’ co-star Anna Kendrick during a photo call for the film this week.

Looking flustered and even sweaty, Ben Affleck for some reason got down on one knee while appearing to flirt with his 31-year-old co-star. Looking rather uncomfortable, Anna tried to pull him back with her body language, clearly signaling that she didn’t expect Ben to behave the way he did.

While there’s no doubt that Ben and Anna have a good rapport, these photos are no doubt going to spark ire in Jennifer Garner. The last thing she needs to see is Ben openly flirting with another woman on the red carpet. Sure, Jennifer and Ben might be separated, but they are still married and raising their three kids together at home. Was Ben trying to make moves on Anna in front of the press? Is he no longer hiding the fact that he’s to move on from his controlling ex-wife Jennifer Garner? Does Ben himself even know what he’s doing?

Then again, this is just the old Ben Affleck falling back to his long but not forgotten habits. Ben was an absolute mess after he broke up with Jennifer Lopez in 2004 and before he met and ultimately married Jennifer Garner in 2005. There’s no hiding that Ben is beginning to come undone again and this time around there’s nothing Jennifer can do to stop him.

He’s long checked out of their marriage and relationship and has had one foot out the door as it is. Jennifer can try and pull him back as much as she can, but Ben is going to end up escaping his ex-wife’s control one way or another.

Tell us, do you think Ben Affleck is beginning to unravel again? Is this just the beginning of another one of his public meltdowns? Are Ben Affleck and Jennifer Garner finally going to file for divorce by the end of this year? Let us know what you think in our comments section! Also, don’t forget to come back to CDL for all the latest news and updates on all of your favorite celebs here!