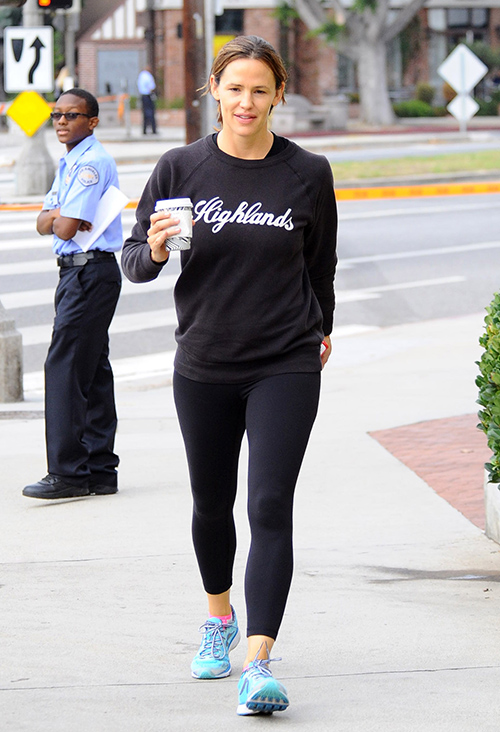 Jennifer Garner might be making jokes about Brad Pitt and Angelina Jolie’s problem, but there’s no doubt that she wouldn’t be doing the same if her situation with Ben Affleck were just as serious. The Hollywood actress – who separated from Ben last year but is yet to file for divorce – hinted that she might be involved in Brangelina’s very messy and very public split.

According to Us Weekly, Jennifer, who shares three children with her husband Ben, joked around when she told the paparazzi that she is currently dating Brad Pitt. When the paps caught her grabbing a coffee after a workout with a friend, she told one of the cameramen, “Brad and I are dating.” When one asked again, “You’re dating Brad Pitt,” she quipped again with, “Yeah! Isn’t that great?”

Of course, Jennifer Garner wouldn’t be laughing or even poking fun if a young Hollywood actress hinted that she was dating Ben Affleck. Jennifer has been doing everything in her power to make sure that Ben doesn’t stray even though they are technically not romantically involved with one another anymore.

Plus, there’s also the fact that Jennifer Garner is so obsessed with her image as a hands-on celebrity mom that there’s no doubt in anyone’s mind that she would have a near meltdown if things didn’t go her way with Ben Affleck. Sure, he might be cooperating with all of those ‘happy family’ photo ops while regrettably staying by her side, but it will only be a matter of time before he splits for good and goes back to his old Bachelor and partying ways.

Considering that she is a mother herself and knowing that six kids are involved in Brad Pitt and Angelina Jolie’s nasty divorce, Jennifer should be the last person making any jokes at someone else’s expense or taking nasty digs at Angelina and Brad’s problems like she did here. Then again, there’s a good chance that Jennifer Garner is relieved that Brangelina’s divorce has taken the spotlight away from her own problems, making her and Ben definitely look more civil and cooperative in their own separation and co-parenting arrangements.

Jennifer would definitely have a different reaction if Ben Affleck jokingly told the paparazzi he was dating Angelina Jolie. Knowing how jealous and insecure she can sometimes be, it wouldn’t end well if Ben even tried to make a similar joke in public, which would no doubt start a rumor that would spread like wildfire. As they say in Hollywood and elsewhere, what goes around definitely comes around. Do you agree, CDL readers?

Want to hang out with Tom Brady and me? And…I guess Matt can be there too. We’ll grab some pizza and beers for a good cause! Head to omaze.com/boston or click the link in my bio.