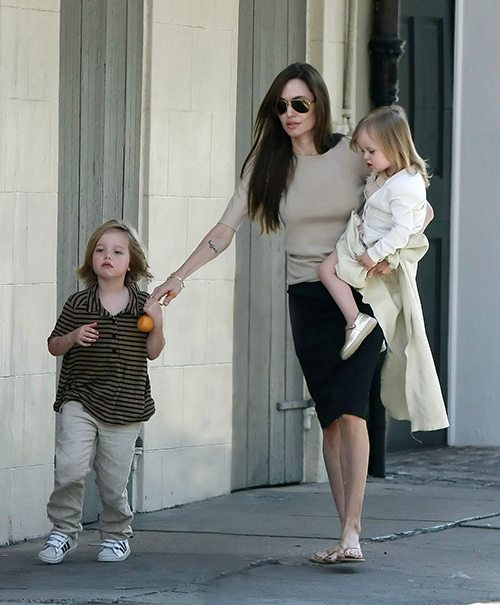 It looks as though Angelina Jolie is erasing every memory she has of her soon-to-be ex-husband Brad Pitt – including the permanent ones. There’s a new report that says the Hollywood actress is removing all of the tattoos she’s dedicated to Brad over the years while supposedly telling her close friends that ‘the pain is worth it.’

For over a decade, Brad Pitt and Angelina Jolie were considered Hollywood’s golden couple. Recently, the actress filed for divorce, which shocked just about everyone who were under the impression that their fairytale marriage and family life was nothing less than perfect. And now Angelina has opened the floodgates, suggesting that Brad not only has substance and alcohol abuse problems, but that he is also a threat to their six children’s well-being. That’s why she wants him out of her life – and off her skin – in every way possible.

According to OK! Magazine, Angelina, who has often been regarded as one of the most beautiful women in the entertainment world, is completely erasing Brad from her life, one tattoo at a time. One insider told the publication, “Angie’s tattoos are very symbolic for her. Sadly, not for the first time in her life, she’s thinking of having the procedure reversed. She wants this done as soon as possible and insists the pain is worth it in order to erase any negativity surrounding Brad, who also has tattoos dedicated to her.”

The insider added that Angelina’s decision to remove her tattoos are ‘final’ and that she’s an ‘all-or-nothing’ kind of woman. Surely, anyone who has followed Angelina Jolie over the years knows this, as she’s famously carried a vial of blood from her ex Billy Bob Thornton around her neck and even openly kissed her brother James Haven on the lips at awards shows. So it’s no wonder that Angelina is not only trying to destroy Brad Pitt with her public smear campaign against him, but keep him as far away as possible from both her and their children as well.

In fact, there’s very little chance that Angelina would even consider co-parenting with Brad in the future, as she’s obviously so disgusted by whatever happened between them that she never wants to see him ever again. Sure, the emotional pain is no doubt difficult for her, but she’s apparently willing to go through physical pain just to show the world how desperate she is to get rid of Brad once and for all.

Tell us CDL readers, what do you think? Drop us a line with your thoughts in our comments section below and of course, check back with CDL for all the latest updates on Angelina Jolie and Brad Pitt’s divorce right here.