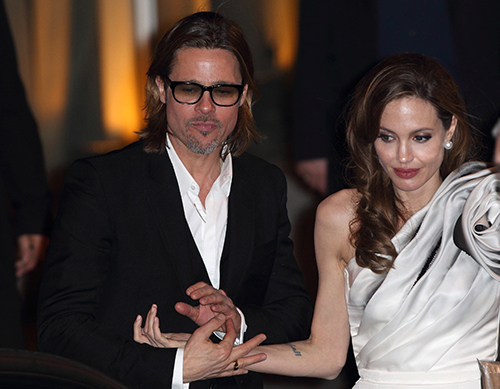 Angelina Jolie filed for divorce from Brad Pitt after two years of marriage and a total of 12 years together. Allegations of child abuse surfaced when it was revealed that Angelina asked for sole physical custody of the couple’s six children.

The allegations of abuse came from an anonymous call to the Los Angeles Department of Child and Family Services. Whoever made the call told DCFS they thought Brad had been abusive with 15-year-old Maddox during a flight from France to Los Angeles.

TMZ received the exclusive on the anonymous phone call to DCFS and notes that details regarding the incident aboard the private jet are not clear.

What reportedly happened? Sometime after the plane departed from France, Angelina Jolie and Brad Pitt got into an argument. Eldest son Maddox came between his parents to try and end the disagreement. Allegedly, Brad then went after Maddox and father and son in some way made physical contact.

No one knows for certain yet if Brad Pitt and Angelina Jolie were actually arguing, and if they were what the disagreement was about.

It’s possible that Maddox was misbehaving on the jet. The way in which to deal with Maddox may have been the cause of any argument. Angelina and Brad do have different ideas on parenting. If Brad did put his hands on Maddox, it could have been simply because the teenager came between the couple in order to defend Angelina.

Sources close to Brad told TMZ that the actor had been drinking at the time. Authorities involved in the child abuse investigation were told Brad was drunk. However, other sources told TMZ that Angelina stated Brad was sober at the time of the alleged confrontation.

Brad Pitt categorically denies that any abuse took place. Insiders reveal that Brad has never been physically abusive, though there may have been times when Brad verbally reprimanded the children.

A source close to the Oscar winning actress simply wants to protect her children. Apparently, the alleged physical altercation between Maddox and Brad Pitt on the airplane was the final straw for Angelina Jolie.