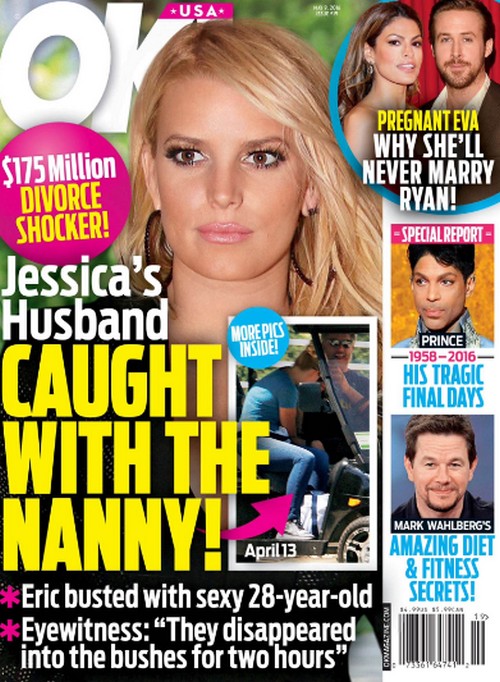 Jessica Simpson could be headed for divorce if Eric Johnson is cheating with one of the couple’s three nannies. There have been reports that Jessica and Eric fight constantly over money and there’s a reported $175 million fortune at stake if the couple splits.

Eric hasn’t worked in years, not since becoming a free agent in 2010. The Yale graduate and former NFL player has lots of time to spend with the couple’s two children, and the kid’s nannies, while Jessica is bringing home the cash.

How does Eric thank Jessica for supporting the family? Allegedly by causing speculation that he is having an affair with one of the child minders.

Sure Eric does lots of fun stuff with Maxell, 4, and Ace, 2, while mom is working. But it appears as if an attractive young blonde accompanies Eric and the kids on these outings.

In the most recent edition of OK! magazine (May 9, 2016) a source divulged that this woman has been on hikes, out do dinner and gone grocery shopping with Eric, Maxwell and Ace.

The insider says, “Eric doesn’t need to bring a nanny grocery shopping or on a hike. Those are things he can do alone or the paid staff can do without his supervision.”

This is not proof of an affair, but insiders say Jessica Simpson won’t take it very well when she finds out Eric Johnson is getting much too chummy with the hired help. The source isn’t quite sure how far things have gone between Eric and the nanny.

It all appears innocent between Eric and the nanny. “Eric is bound to cross a line,” The insider believes. The source suggests that if Jessica should “fire the twentysomething and hire a dowdy Mrs. Doubtfire.”

If Eric does cheat on Jessica it could put the couple in divorce court. Jessica and Eric reportedly fight quite a bit about why he is unmotivated and won’t find a job. Jessica’s then turns to work to get away from the fighting and this causes more problems.

A divorce won’t come cheap for Jessica. Even if Jessica Simpson can prove Eric Johnson cheated he’s still probably going to fight for more than his fair share of her $175 million fortune.