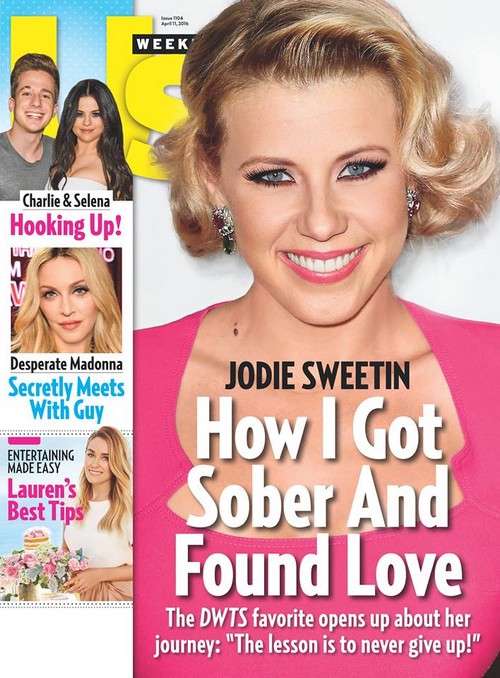 Dancing With The Stars 2016 contestant Jodie Sweetin is at the top of her game right now, and we are currently witnessing an amazing comeback for the 90’s child star. Not only has the ‘Full House’ alum emerged as a frontrunner in Season 22 of ‘Dancing With The Stars’ – but she is SOBER.

Like many child stars thrust into Hollywood, Jodie Sweetin spiraled out of control as her glory days on the popular sitcom ‘Full House’ came to an end. In this week’s edition of US Weekly Magazine, Sweetin opened up about her battles with addiction – and celebrating 5 years of sobriety.

Sweetin dished to US Weekly, “We all have our demons. When we finally learn to let them go, we get to live and be free.” The actress and ‘DWTS’ competitor added, “I’ve got everything I could want. I look back at things that have happened in the past, and I look at where I’m now, and it’s crazy. If anything, my life is a lesson to never give up.”

Not only is Sweetin killing it on the ‘Dancing With The Stars’ stage and a huge contender for the Mirror Ball Trophy this season – but her ‘Fuller House’ reboot on Netflix turned out to be a huge hit and a second season was just ordered. Plus, Jodie’s personal life isn’t too shabby either. Jodie is engaged to be married, and she also opened up about her fiancé in her interview with US Weekly.

Jodie Sweetin revealed that her fiancé Justin Kodak also struggled with addiction like her, and their sobriety has brought them closer. The actress dished, “He was 11 years sober in December. We turn to each other for support. We both have our own lives and things we’re excited about, but we combine that, where we have this great relationship.”

We are SO proud of Jodie Sweetin, and we are excited to be able to watch her comeback on Season 22 of Dancing With The Stars. Do you think that she could be the DWTS 2016 winner? Let us know what you think in the comments below and come back to CDL for all your Dancing With the Stars news, dances and recaps