Who Got Voted Off Dancing With The Stars Tonight 3/28/16? 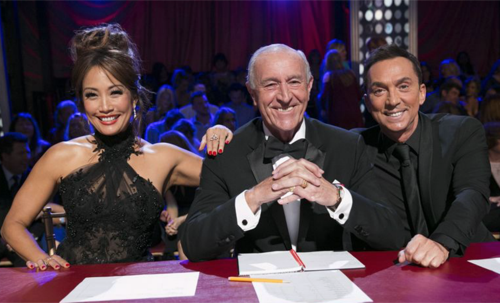 Tonight on ABC it is the first Dancing With The Stars elimination of Season 22 and we will say goodbye to our first star.

After last week’s performances, at the top of the leaderboard were Nyle DiMarco and Peta Murgatroyd, Ginger Zee and Val Chmerkovskiy and Wanya Morris and Lindsay Arnold all scoring 23/30. At the bottom of the leaderboard Doug Flutie and Karina Smirnoff scoring 15/30.

We conducted a poll this week and CDL writers voted 38.26% that Geraldo Rivera and Edyta Sliwinska will be going home.

On tonight’s episode, “The 12 celebrities ready themselves for Latin Night, one of the hottest nights in the ballroom, with each celebrity performing either a rumba, salsa, samba, paso doblé, cha cha, or Argentine tango. At the end of the evening on star will be sent home.”  Did you watch tonight’s performance episode?  If you missed it we have a full and detailed recap, right here.