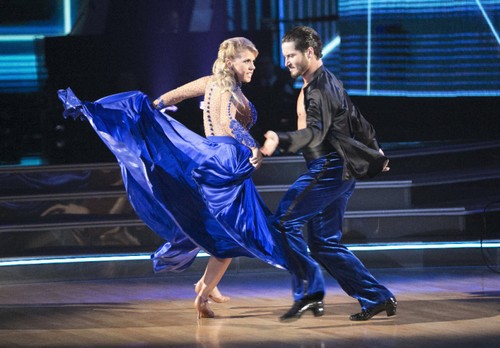 Is Jodie Sweetin leaving Dancing With The Stars Season 22 due to a serious ankle injury? Last week during Switch-Ups ‘Fuller House’ star finally seemed to be getting her groove on DWTS Season 22, and she scored her highest so far this year.

However, her impressive run may be coming to an end – Sweetin was reportedly rushed to the hospital in an ambulance after a serious injury during rehearsals with her partner Keo Motsepe.

Jodie Sweetin’s rep confirmed that the Dancing With The Stars 2016 contestant is currently at the hospital in an official statement, “Earlier today, Jodie Sweetin injured her left foot during rehearsals for Dancing with Stars. She was taken by ambulance to a local hospital and she is awaiting her official diagnosis. She is in good spirits while she waits and Keo, along with her fiancee Justin Hodak, are by her side.”

There are a few alarming things about that statement. First of all, there are always medics and trainers on sight at rehearsals. Generally, they tend to the celebs and their partners – if the medics on sight felt that a trip to the hospital was necessary, it’s probably not good.

Second of all, why did they need to call an ambulance? Right now there are mixed reports – and there is some confusion about whether or not it was Jodie’s foot or ankle.

As of right now, no one from Jodie Sweetin’s team or the ABC dance competition have released any further details on the incident. Already DWTS fans are speculating whether or not Jodie Sweetin will be able to perform on Monday night’s episode, which is just four days away. As we all know, if Jodie doesn’t take the stage – she will be automatically eliminated.

So DWTS fans, what do you think happened to Jodie? Is it as serious as it sounds? Will she be able to recover before Monday night, or is the ‘Fuller House’ star out of the competition for good? Let us know what you think in the comments below and don’t forget to check CDL for all of your Dancing With The Stars 2016 spoilers and news.