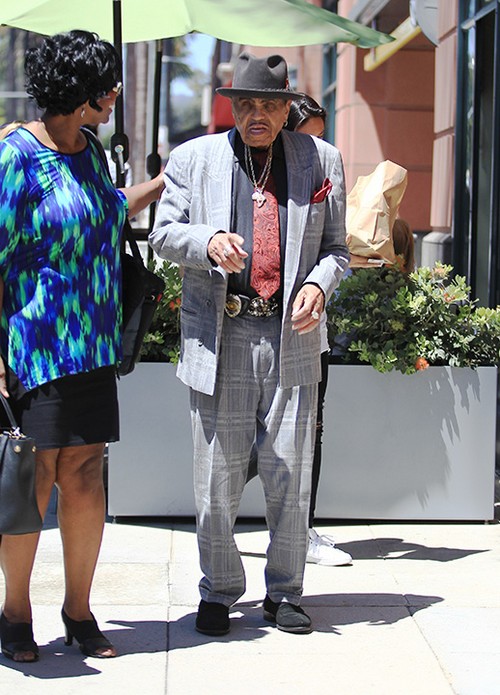 Is Michael Jackson’s father Joe Jackson ill? The patriarch of the Jackson family appeared sickly on Wednesday, August 17 as he entered a medical building in Beverly Hills. Katherine Jackson accompanied her husband and appeared to be consoling him.

This isn’t the first medical crisis Joe has faced over the past year. While celebrating his 87th birthday in Sao Paulo in July 2015 Joe suffered a massive stroke and heart attack. Upon admission to the hospital Jackson was diagnosed with an irregular heartbeat and a pacemaker was implanted.

Joe’s health has deteriorated further in recent months. In May 2016 the father of 11, who rocketed the Jackson Five to superstardom, was hospitalized after a high fever developed during a routine physical. Joe was hospitalized for approximately one week.

Recent photos show the toll last year’s stroke and heart attack has taken on Michael Jackson’s father. Joe’s seems to have lost a great deal of weight and his clothes hang from his withered frame. In the photos it looks as if Joe required Katherine’s help to walk.

Janet Jackson, the youngest of the Jackson siblings, is expecting her first child with husband Wissam Saleh Al Mana. The late Michael Jackson’s family must be concerned that Joe Jackson may be so gravely ill he may never meet Janet’s child.

Katherine Jackson and Joe Jackson have been married for more than 65 years and faced many crises together, including the untimely death Michael Jackson from a drug overdose in 2009. Following Michael’s death Katherine was appointed guardian of Michael’s three children, Prince Michael, Paris and Blanket.

It was reported in 2010 that Katherine and Joe planned to divorce after 60 years of marriage. Joe had reportedly cheated on Katherine with dozens of women for decades. Many years ago LaToya Jackson revealed that Joe was verbally and physically abusive to the Jackson children and to Katherine.

While Katherine Jackson appears to be in good health and looking better than ever, Joe Jackson has become a withered, sickly old man who is facing yet another medical crisis. CDL attempted to reach out to representatives for Mr. Jackson but there has been no response.

Former ‘Jackson 5’ member Joe Jackson heads to a medical building in Beverly Hills, California on August 17, 2016. He was accompanied by his wife, Katherine Jackson who appeared to be consoling him while they were out together. FameFlynet