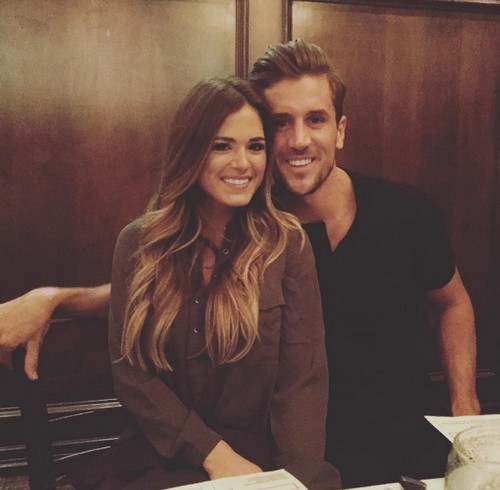 The Bachelorette 2016 JoJo Fletcher is showing off her $100,000 engagement ring from Jordan Rodgers on Instagram in a transparent attempt to quash persistent cheating rumors fueled by his definitely-not-over-him ex, Brittany Farrar.

In her social media post, Brittany Farrar lashed out at Jordan Rodgers stating, “After our breakup, I was surprised to find out what a prolific liar and cheater #JordanRodgers was during our entire 3 1/2 year-relationship. But what has surprised me even more is how he has carelessly bashed and lied about me in public. I guess he thought I wouldn’t stand up for myself. #HeWasWrong.”

And just in case the ending hashtag didn’t get her point across, she decided to elaborate with another now-deleted post featuring super bitter and overly-specific breakup deets: “When I broke up with my ex and gave back his old mattress and chia seeds — that was his ultimatum to me (‘Give me another chance or I want my mattress and the chia I bought back!’) — his lies stopped being my problem,” Brittany added in a now-deleted post. “UNTIL he went onto one of the most popular reality shows on TV and lied about our relationship.”

JoJo Fletcher decided to have the last word by showing her ring off while hand-in-hand with Jordan Rodgers in a photo with the caption “The best thing to hold onto in life is each other… and tacos.” Cute, but if the rumors are true JoJo Fletcher is clinging onto much more than tacos – the couple have repeatedly faced allegations that their relationship, if there ever was one, has been over for some time and the two are merely putting up appearances so they can get their hands on some serious marketing cash.

The Instagram show of Bachelorette love was probably designed more for purposes of potential book deals and spin-offs than as a display of pre-marital bliss, but Brittany Farrar definitely took the bling bait. It’s definitely safe to say that, at some point in the not-so-distant future, these two will do a special interview where they both talk about how Jordan Rodgers ruined their lives and ask for donations for their new non-profit called “Women Who Are So Totally Not Just Out For Attention.”

What do you think? Is JoJo Fletcher still into marrying Jordan Rodgers, or is she just into that $100,000 ring? Tell us your thoughts in the comments below and come back CDL for all your Bachelorette news!