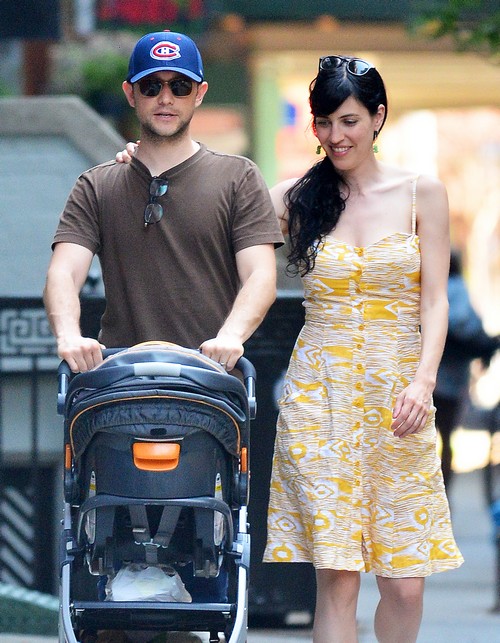 Joseph Gordon-Levitt spent some quality time with his family as the photos below show. With their son in a stroller, Joseph and his wife Tasha McCauley took a walk around SoHo on Tuesday, May 31. The ‘Sin City: A Dame to Kill For’ star and the co-founder and CEO of Fellow Robots, a NASA based Research Park, welcomed their son in August 2015.

The couple has been very private about their relationship which began in 2013. Joseph and Tasha quietly married in December 2014.

Once asked about his dating life Joseph said he had a girlfriend but preferred not to talk about his private life. Tasha, who has a MBA degree from USC, and in addition to English speaks Spanish and Arabic fluently, isn’t interested in being part of the Hollywood lifestyle.

Tasha also has a B.A. from Bard College and a graduate certificate from Singularity University. Tasha went on to teach rapidly accelerating technologies at the same University. Seems she’s a perfect fit for Joseph who once told Howard Stern has always had a phobia about getting attention from girls for being famous.

Joseph Gordon-Levitt started his career as a child with appearances on the television dramas ‘Murder, She Wrote,’ ‘Quantum Leap,’ ‘L.A. Law’ and ‘Dr. Quinn, Medicine Woman.’

In 1996 Joseph was cast as Tommy Solomon in the hit comedy ‘3rd Rock from the Sun’ opposite an all-star cast of comedians – John Lithgow, Kristen Johnston, French Stewart and original ‘Saturday Night Live’ cast member Jane Curtin. The actor is one of a handful of child stars who have been able to make the transition to adult star.

First Look of actor Joseph Gordon-Levitt with his son in New York City, New York on June 3, 2016. Joseph’s son had two mismatched socks on. He made sure to hold the back of his head and kiss him while on his walk.

Joseph Gorden-Levitt and his wife Tasha McCauley were spotted taking a walk in the Soho District, New York on May 31, 2016. The new parents were doting over their baby boy, as they pushed the stroller through the street. FameFlynet