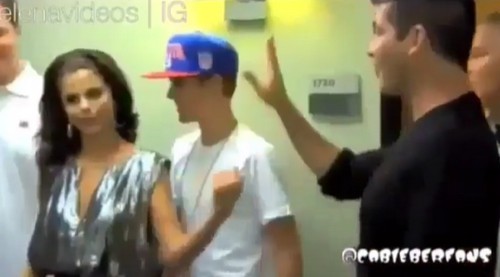 Has Justin Bieber reunited with Selena Gomez? There’s an Instagram video that proves the Biebs made a promise to Simon Cowell to watch out for SelGo.

The Biebs and SelGo have been off-again-on-again-off again for who knows how long. Not long ago Justin and Selena were in a piano bar and Bieber was serenading Gomez with his rendition of “My Girl.”

Both singers have played cat-and-mouse games with the press and fans as their respective new albums dropped in 2015. Most people thought the are-they-aren’t-they game was all a public relations stunt .

So, what’s up with this video clip? An Instagram user with the name justinandselenaaa posted said clip and Selena Gomez allegedly “Liked” the video. In the vid clip, which is about 15 seconds long, Justin and Selena appear to be backstage somewhere or other with X Factor host Simon Cowell. Now, this could be a really old clip, there hasn’t been any indication it’s recent.

Check it out – Simon Cowell shakes Bieber’s hand, kisses Selena on the cheek and there’s a whole lot of mumbling going on. But you can hear, ever so faintly, Cowell say to SelGo, “Look after him,” and points to the Biebs. As Gomez and Bieber walk off you can hear Justin Bieber say, “I’ll look after her!”

This Instagram post has over 10,000 likes and quite a few comments. Not one person identifies the time frame for this clip. The person who posted it was very excited in the caption, like this was a brand new, never before seen nugget. “I’M SO HAPPY FOR YOU BABYYY. You deserve it. I love to see you freaking out, I hope that Selena will notice you every single day. And I hope that she will notice all of youuuu.”

This Instagram user posts lots and lots and lots of Justin and Selena photos and videos. It’s pretty obvious this person is an overly enthusiastic fan who wants SelGo and Justin back together forever. Do you think Justin Bieber and Selena Gomez area back together? Is this just an old vid clip from a time when Jelena was an actual couple?

I’M SO HAPPYY FOR YOU BABYYY 💜💜 You deserve it. I love to see you freakin out, i hope that Selena will notice you every single day. And i hope that she will notice all of youuuu💞 -@supporting_madison #jelena