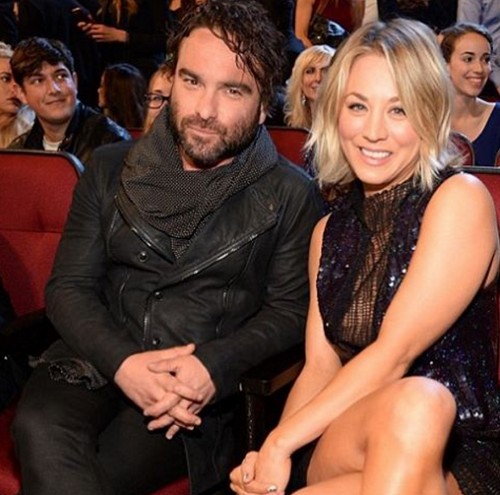 Are Big Bang Theory costars Kaley Cuocoo and Johnny Galecki actually friends with benefits? Have the exes decided to remain friends that enjoy some extra curricular activities on the side?

According to a report from the latest issue in Ok! magazine, Kaley Cuoco and Johnny Galecki are having some ‘fun’ together. It’s been just five months since Kaley’s divorce from her ex-husband Ryan Sweeting. But that doesn’t seem to be stopping her from moving on and enjoying her singleness. A source told the magazine that Kaylee is in fact in a “friends with benefits situation.”

If you were unaware, Kaley Cuoco and Johnny Galecki actually dated for nearly 2 years before they broke up back in 2010. The source continued,”They don’t want to be serious again, but they’re really comfortable with each other.” So this is all about having some fun! Nothing wrong with that, right? The source concluded, “When Kaley finds someone, she’ll cut it off.

But she’ll always keep Johnny in her life.” This makes me wonder how Johnny feels about it? Does he feel the same? If he finds someone else, would he be ready to cut it off with her? Or do you guys think that perhaps Johnny’s feelings might be a little more involved than Kaley ‘s feelings are?

We recently saw Kaley and Johnny together at the People’s Choice Awards where The Big Bang theory was nominated (and won.) They were seen awfully cuddly and cozy together, almost like they were dating. But they were sure to cover it up with some ‘friendly’ captions that they included in their social media posting like when Kaley said, “Thank you for the @peopoleschoice award!!

Look how happy we are!! @bigbangtheory_cbs season9 #mydate #notdating”…..yeah, so they aren’t dating. They are just really, really ‘close.’

Is it just me? Or do you guys find it really hard to believe that two people who are former lovers and dated for about two years could actually remain costars and good friends and never have the romantic chemistry spark up again?

If Kaley Cuoco and Johnny Galecki really are hooking up on a friends with benefits basis, then more power to them. Why not have some fun without all the strings attached when you have already been down that road and it didn’t work out for one reason or another?

Fans of the Big Bang Theory have got to love the idea Johnny and the Kaley hooking up in real life [again]. Even if it isn’t a really serious relationship, it’s fun to know that what we see on the show’s characters could be a little bit of a reflection of what is going on in real life. That makes a little more interesting, doesn’t it?

What you guys think about this? Do you think that Johnny and Kaley we are friends with benefits? Do you like the idea that or do you wish that they would just remain simple friends and keeps the messiness out of? Sound off in the comments below and be sure to check back here at CDL for all of your favorite celebrity news!

The Beggar and the Beauty. #backstage #peopleschoice @normancook THANK YOU, FANS.

A photo posted by Johnny Galecki (@sanctionedjohnnygalecki) on Jan 6, 2016 at 9:26pm PST