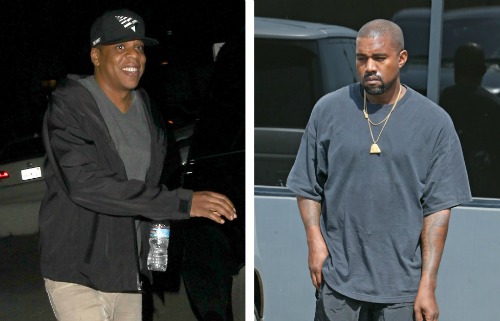 Kanye West attacked his former best friend Jay-Z and his wife Beyonce in a new rant during his Saint Pablo concert stop in Sacramento, California this weekend. Reports indicate that the ‘Famous’ singer called out Beyonce for only attending the Video Music Awards unless MTV promised her an award while also calling out Jay-Z’s ‘killers’ in what many eyewitnesses are calling one of the rapper’s most bizarre rants yet.

Kanye performed three songs in the beginning of his concert, abruptly stopped and then went on a foul-mouthed tirade over Jay-Z and Beyonce before quitting the show altogether. While many concert-goers say it was difficult to follow Kanye’s train of thought during his rant, he did say that Beyonce would not attend the VMA’s this year unless the network promised her the award for Video of the Year.

What’s more, he attacked Jay-Z for cutting the cord on both their professional relationship and friendship – Kanye West also alleged that Jay-Z has ‘killers’ and asked his former pal not to send them his way!

Both fans and critics alike believe that one of the reasons why Jay-Z and Beyonce no longer want to associate themselves with Kanye is because of his wife, Kim Kardashian. Beyonce has made it no secret that she is not a fan of the reality television star, forcing Jay-Z to cut ties from his former best friend. To make matters worse, Kanye and Jay-Z’s children, North West and Blue Ivy, haven’t even had a play date together even though they live only a few minutes away from one another in Los Angeles.

Kanye for his part though, might be hoping to get some closure on this messy situation and that’s why he’s calling out Jay-Z and Bey the only way he can and that’s by humiliating them in public. Of course many fans believe the one thing he doesn’t realize though is that Jay and Bey are going to distance themselves even further by the rapper and will even go as far as labeling him as mentally unstable and in need of help, especially after claiming that Jay-Z has ‘killers.’ So far the ’99 Problems’ hit maker has not made any comments about the accusation.