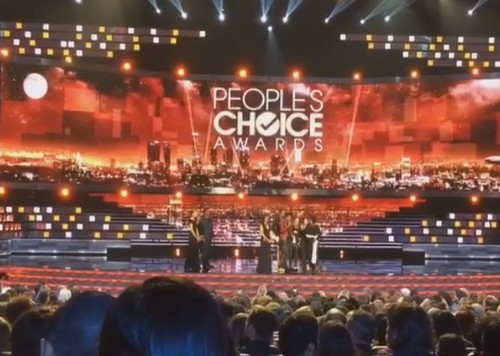 Zacari Nicasio was the bold young man who stormed the stage at the 2016 People’s Choice Awards and grabbed the mic from Sara Gilbert. Nicasio didn’t get to stay on stage long because the women of The Talk chased him down. Now some think Kanye West may have been behind the unauthorized stage takeover and that just might be possible.

The awards show prankster introduced himself after grabbing the microphone from Sara Gilbert and then went on to give Kanye West a shout out. Zacari Nicasio was in a hurry to get his message out during the People’s Choice Awards. He may have had more to say but Sharon Osbourne was trying to karate kick the aspiring rapper and the rest of the women from The Talk chased him off stage.

Sheryl Underwood even shouted for security and then heckled the stage crasher, saying, “You ain’t gonna pull no Steve Harvey up in here.”

For several reasons, people are starting to think that Kanye West was behind the stunt at the People’s Choice Awards. For starters, rushing the stage and grabbing the mic is a signature Kanye move and one that he’ll never live down.

Another reason some believe that West might have put Zacari up to the stage stunt is that the aspiring rapper made reference to Yeezy’s new song before being thrown out.

Nicasio quoted the new Kanye release Facts when he said, “ Yeezy jumped over Jumpman.” The line is a direct diss at Nike, whom Kanye recently left in a huff before signing a huge contract with ADIDAS instead.

Kanye’s new song has understandably stirred up quite a bit of controversy with the bold claims made in the song. Did Kanye put Zacari Nicasio up to the stage crashing stunt so he could promote his new single?

The Hollywood Reporter already spoke with Zacari, who claims that he’s a huge fan of Kanye. The Los Angeles-based rapper told THR that he was handcuffed after getting chased off stage but then was released.

“I had to shout out who I look up to: Kanye West and Kevin Gates,” told the website. “I came here to do this tonight. I could honestly care less about what was going to happen.” Nicasio also shared that he crashed Kris Jenner’s 60th birthday and was able to get on the stage next to West. Nicasio claims he is crashing these celebrity events in order to make a name for himself.

Is Zacari a Kanye stalker or is he actually on the payroll? Nicasio seems too close to Kanye for all this to be a big coincidence. West has interrupted his fair share of awards shows and having Zacari Nicasio storm the stage a la Taylor Swift at the VMAs would be something the rapper might do to be funny. Do you think Kanye West was in on the joke or should he be worried about his superfan?