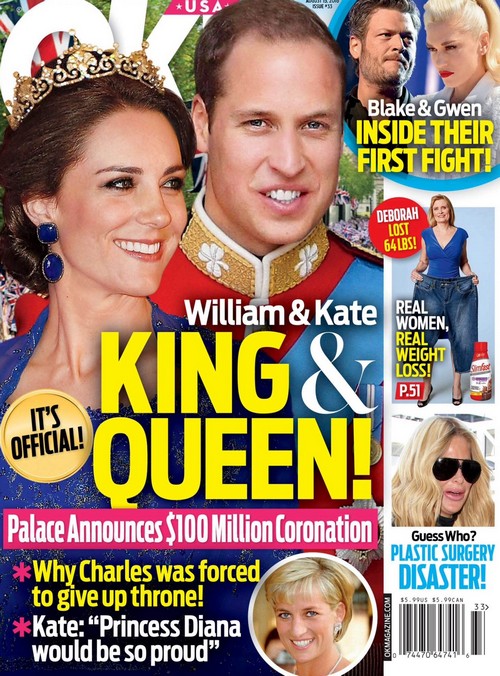 In an unprecedented move by the royal family, the normal line of succession will be overridden and Prince William and Duchess Kate Middleton will be crowned King and Queen according to new report.
Move aside Prince Charles and Camilla Parker-Bowles – the British public prefers William and Kate as their next King and Queen and Her Majesty, Queen Elizabeth agrees, OK Magazine reports.

Surprisingly, Prince Charles fully intends to comply with the wishes of Queen Elizabeth and of the public at large, despite the strong objections of his wife Camilla Parker-Bowles.

Prince Charles knows all too well the importance of public opinion after the tragic death of Princess Diana. The marriage of Prince William and Kate Middleton breathed new life into the stagnant and increasingly obsolete royal family. Because of Will and Kate’s overwhelming popularity and suitability to reign, Prince Charles has agreed that it is in the best interest of the country for him to abdicate the throne to his eldest son once Queen Elizabeth steps down.

Charles will be the second royal in less than a century to abdicate. Although the Queen fully supported Charles’s decision to step aside, wife Camila Parker-Bowles is furious. Camilla has never been popular in Britain, especially following her decades long cheating with Prince Charles and the subsequent divorce and then death of Princess Diana.

Kate Middleton, on the other hand, is beloved by the media as well as the public and many believe that she is a much more suitable candidate for Queen than her mother-in-law.

A source tells OK that the legions of viewers worldwide who tuned in to watch Prince William and Kate Middleton’s royal wedding should prepare to be blown away by the upcoming coronation ceremony. With an estimated cost of $100 million, the coronation promises to be the grandest affair that Britain has ever seen.

Are you planning to tune in to Will and Kate’s coronation? Do you agree that they would make a better King and Queen than Prince Charles and Camilla Parker-Bowles? Will Prince Harry stand by his brother and sister-in-law or defend his father’s right to the throne instead?

Of course there is an excellent chance that this report by OK! is false and their sources are in error. After all, The Palace isn’t know for releasing critical information to American tabloids, are they? Come back to CDL for all your Royal news and reports!