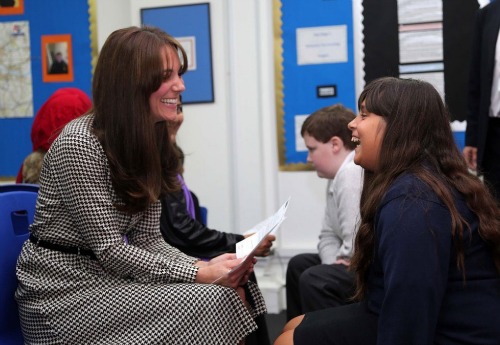 Kate Middleton knows that she needs to do what it takes to put her charities and causes in the spotlight and that’s why she’s finally speaking up. The Duchess has opened up about mental health counseling, saying that she wouldn’t hesitate to give Prince George and Princess Charlotte the help they need if they suffered from mental health issues.

Kate Middleton has launched a series of podcasts to help parents and families that suffer from mental health issues. In her first podcast, Kate Middleton said, “With the right help, children have a good chance of overcoming their issues while they are still young, and can have the bright future they deserve. Knowing this, William and I feel very strongly that we wouldn’t hesitate to get expert support for George and Charlotte if they need it.”

And while there’s no doubt that Kate Middleton and Prince William would do whatever it takes to make sure Prince George and Princess Charlotte get the help they need, many critics can’t help but wonder about Kate Middleton’s own mental health issues. After all, this is the same Duchess who has often been bullied by the media for her weight, looks, her Prince William marriage and of course, her role in the British royal family.

This has no doubt taken a toll on Kate Middleton’s well being, and that’s perhaps why she’s already worried about her family, particularly Prince George and Princess Charlotte, as they continue to be exposed to the media.

Of course, Kate Middleton knew that she would be scrutinized by the press the day she married Prince William and became the Duchess of Cambridge. And that’s why mental health awareness has been such an important cause for her, as Kate Middleton knows all too well the toll bullying and any mental disorders can take on a person.

With all the media harassment that Prince William and Kate Middleton have had to deal with in their five-year marriage so far, it’s no surprise that they are worried about their family’s future. As much as she doesn’t want to see Prince George and Princess Charlotte harassed by the public, it’s almost inevitable that it will happen in the future and that’s why the Duke and Duchess are already considering counseling, should they need it for their kids.

Tell us CDL readers, do you think Kate Middleton and Prince William are worried about Prince George and Princess Charlotte having mental health issues, especially if they end up being bullied by the media? Let us know your thoughts in our comments section below and come back to CDL for all the latest Royal news!

“William and I both feel very strongly that we wouldn’t hesitate to get expert support for George and Charlotte if they need it.”